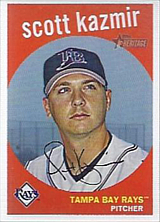 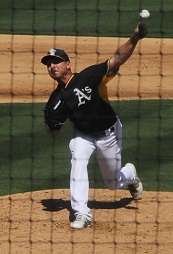 Scott Kazmir was drafted by the New York Mets in the 1st round of the 2002 amateur draft. He went 15th overall, while his teammate at Cypress Falls High School Clint Everts was the #5 pick. He was signed by scout Dave Lottsfeldt and made his pro debut the next summer. Bbefore he could make his major league debut with the Mets, he was involved in a very controversial trade that sent him to the Tampa Bay Devil Rays on July 30, 2004 in return for pitchers Victor Zambrano and Bartolome Fortunato. Mets fans immediately denounced the deal, saying it was pure folly to trade the organization's best pitching prospect in years in return for a mediocre starting pitcher; when Zambrano suffered a serious injury three starts into his Met career, the denunciations of the deal only grew louder.

Kazmir made his major league debut with the Devil Rays on August 23, 2004. He put up an excellent 2.63 ERA in 25 starts for two Class A teams in 2003, striking out 145 batters in only 109 1/3 innings, then in 2004, had a 2.50 ERA in 19 starts between Class A and AA, adding another 104 Ks in 101 innings. His win/loss records were nothing special, but that was part of the Mets' strategy not to overuse the youngster with the golden arm. There were no such qualms for Tampa Bay, however. As soon as he arrived in Florida, he became part of the team's starting rotation and took a regular turn on the mound, accumulating plenty of innings. He made 8 appearances, including 7 starts, in the rest of the 2004 season, going 2-3, 5.67 and striking out 41 batters in 33 1/3 innings. As a rookie in 2005, he had an excellent year, going 10-9, 3.77 in 32 starts. The fact that he maintained a winning record in spite of pitching for a dreadful team speaks a lot, as does his 174 strikeouts in 186 innings; in that context, the fact that he led the American League with 100 walks was almost incidental.

Following the big spike in innings at 21, Kazmir was not in full health and limited to 24 starts in 2006, but continued to be one of the lone bright spots on a Tampa Bay team seemingly mired forever in the cellar of the AL East. He was the team's representative to the All-Star Game on the strength of a 10-8 record, an excellent 3.24 ERA (a 141 ERA+) and 163 strikeouts in 144 2/3 innings. He also cut his walks almost in half, to only 52. Fully healthy in 2007, he continued to shine, leading the AL with 34 starts and 239 strikeouts while pitching 206 2/3 innings. His record stood at 13-9, 3.48. In his first three full seasons, he managed a winning percentage of .559 in spite of pitching for a last-place team that lost 95 or more games each year. At 23, he was definitely one of the brightest young stars in the American League.

In 2008, the Devil Rays changed their name to the Tampa Bay Rays, adopted new uniforms and a new logo, and suddenly became good as the horde of talented young players they had accumulated over the years clicked together. Kazmir was an integral part of that group, although he did not take a step forward as many of his teammates did, simply repeating for a first-place team the performance he had delivered when the team finished around last place the previous three seasons. Thus, he went 12-8, 3.49 in 27 starts as arm woes cost him a month of action, struck out 166 batters in 152 1/3 innings, and returned to the All-Star Game for a second appearance. He won Game 2 of the ALDS against the Chicago White Sox, then started a couple of games against the Boston Red Sox in the ALCS. In Game 2, he gave up 5 runs in 4 1/3 innings, but the Rays hung on for a 9-8 win, then came back to pitch 6 scoreless innings of two-hit ball in Game 6, which the Rays eventually lost. However, teammate Matt Garza had a couple of great performances on the mound, and the Rays advanced to the World Series for the first time in franchise history, meeting the Philadelphia Phillies. Scott started the opening game on October 22nd, giving up 3 runs in 6 innings to be charged with the 3-2 loss. He also started Game 5 on October 27th, leaving after having allowed a pair of runs in 4 innings during which he struggled with his control, walking 6. That game was suspended because of awful weather, and two days later the Phillies completed a 4-3 win to claim the championship.

In 2009, Kazmir began to show the strain of having thrown so many pitches at a young age. He made 20 starts for the Rays, but his ERA was a terrible 5.92, with 50 walks in 111 innings; by then the Rays had an excellent offense, so his record was still over .500, at 8-7. On August 29th, he was traded to the Los Angeles Angels of Anaheim in return for Sean Rodriguez, Matt Sweeney and Alex Torres. None of the three were considered a top prospect, a sign of how much concern there was already about Kazmir's future. He bounced back splendidly for the Angels over the last month of 2009, putting up a 1.73 ERA in 6 starts and ensuring his place in their postseason starting rotation. He had a poor start against the Red Sox in Game 3 of the ALDS, giving up 5 runs in 6 innings, but the Angels won the game, 7-6, thanks to a spectacular 9th inning comeback to sweep the Sox. Against the New York Yankees in the ALCS, he started Game 4 and lost, 10-1, with another mediocre performance. He pitched two-thirds of an inning in relief in Game 6, giving up an unearned insurance run in a 5-2 loss that sent the Yankees to the 2009 World Series.

If Kazmir had struggled for most of 2009, 2010 would be much worse. He made 28 starts for the Angels, with terrible results all around: a 9-15 record, a 5.94 ERA, 75 walks in 150 innings and only 93 strikeouts. Gone was the young left-hander with outstanding stuff who had been the ace of the Devil Rays; instead was a pitcher who was only a shadow of his former self, battling his control all the way and having lost a lot of speed on his fastball, making him a sitting duck for major league hitters. In 2011, he made only one major league appearance, and it was awful, as he allowed 5 runs in an inning and two-thirds in a start against the Kansas City Royals on April 3rd. He did manage to escape with a no-decision in a 12-9 loss. He was sent down to the AAA Salt Lake Bees, but his five starts there were epically bad, as he lost all five with a 17.02 ERA, managing to allow 22 hits and 20 walks in 20 1/3 innings. The Angels handed him his unconditional release on June 15th.

In 2012, Kazmir could not find a major league team interested in giving him another shot and ended up pitching near his hometown, with the Sugar Land Skeeters of the independent Atlantic League. The team made headlines for giving Roger Clemens a chance to start a couple of games late in the year, with most stories also mentioning in passing that Scott was pitching for the team. In spite of the mediocre caliber of his opposition, he only went 3-6, 5.34 in 14 starts but at least, he was seemingly healthy. That was enough to persuade the Cleveland Indians to sign him to a minor league contract on January 8, 2013, coupled with an invitation to spring training as a long shot to make the team as a starter. He managed to out-pitch a motley crew of applicants that also included former Red Sox star Daisuke Matsuzaka and made the Indians' Opening Day roster. "I'm very proud that this has happened," Kazmir said when he learned he had made the team. "Knowing where I was a couple years ago and being able to be here now is unbelievable. I guess hard work does pay off." Before he could make his first appearance with the team, he injured his right side in a workout before the Indians' Opening Day game against the Toronto Blue Jays and had to be scratched from his scheduled first start while heading to the disabled list. He made his season debut on April 20th, but was rocked for 8 hits and 6 runs in 3 1/3 innings by the Houston Astros. He did better in his next few starts, earning his first win since 2010 on May 4th when he defeated the Minnesota Twins by pitching 6 innings in a 7-3 win by the Indians. He ended up with a record of 10-9, 4.04, in 29 starts and 158 innings, striking out 162 batters. He got better as the season advanced, with a 3.38 ERA over the second half, and had his best month in September, when the Indians were in the chase for a wild card slot, when he went 3-2, 2.57, with 43 Ks in 28 innings.

On December 2, 2013, the Oakland Athletics signed Kazmir to a two-year deal worth $22 million, betting that his comeback was for real. He continued his remarkable comeback, going 4-0 with an ERA of 2.11 during 6 April starts. He kept it up for the rest of the season as well, ending up at 15-9, 3.55. He set a personal best for wins while making 32 starts and throwing 190 1/3 innings and striking out 164. Scott also had a pair of complete games, after completing only one start - a shutout back in 2006 - in his first 9 seasons. In spite of his efforts, the A's failed to win a division title, and he was not used when they lost the Wild Card Game to the Kansas City Royals. In 2015, he started where he left off by winning his first two starts, then began to find it impossible to earn a win, as he went 9 consecutive starts without a victory in spite of a solid 3.78 ERA starting in late April. He put an end to that streak with one of the best games of his career on June 11th, when he limited the Texas Rangers to one hit, a 5th-inning single by Elvis Andrus, in 8 innings. Evan Scribner then pitched a perfect 9th inning to complete a combined one-hitter, 7-0. He was 5-5 with an excellent 2.38 ERA in 18 starts when the A's, going nowhere, decided to cash in his value by trading him to the Houston Astros in return for two prospects on July 23rd; going to Oakland were P Daniel Mengden and C Jacob Nottingham. He was named the American League Pitcher of the Month thanks to a 2-0 record, an ERA of 0.26 and 24 strikeouts in 30 innings between the two clubs.he made 13 starts for the Astros, but wins were hard to come by, as he finished 2-6 with a 4.17 ERA, for a season line of 7-11, 3.10 in 31 starts and 181 innings. He started Game 2 of the ALDS against the Kansas City Royals on October 9th, his first postseason appearance since 2009. He gave up 3 runs in 5 1/3 innings and was not involved in the decision as Houston lost, 5-4.

Kazmir became a free agent again after the season and this time managed to land a lucrative longer-term deal, signing on December 30th a three-year deal with the Los Angeles Dodgers worth $48 million. What was also unusual about the signing was that it gave the Dodgers - on paper - an all-left-handed starting rotation, with Clayton Kershaw, Brett Anderson, Hyun-Jin Ryu and Alex Wood all penciled to be starters. He had a good first season in 2016, going 10-6, 4.56 in 26 starts, but he went down with an injury late in the year and not only did he miss that year's postseason, but also all of 2017. On December 16, 2017, he was traded to the Atlanta Braves along with 1B Adrian Gonzalez, SS Charlie Culberson and P Brandon McCarthy in return for OF Matt Kemp. A tough performance coupled with lingering arm issues led to his release in the spring of 2018.