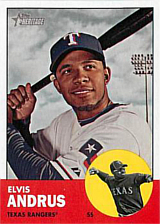 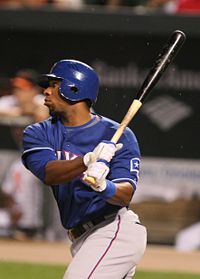 Elvis Andrus has been the Texas Rangers starting shortstop since 2009. He is the brother of Erold Andrus.

Andrus was signed by scout Rolando Petit for the Atlanta Braves at age 16. He debuted professionally in 2005, hitting .295/.377/.398 for the GCL Braves and going 5 for 18 with 4 walks and a double for the Danville Braves. He led Gulf Coast League shortstops with 63 putouts. Baseball America rated him the #4 prospect in the GCL behind Andrew McCutchen, Jay Bruce and Chris Volstad and the #2 Braves prospect. In 2006, Elvis hit .265/.324/.362 with 23 steals in 38 tries for the Rome Braves as a teenager in a full-season league. He led South Atlantic League shortstops with 208 putouts and was named to the SAL All-Star team as a utility infielder. Baseball America again ranked him his league's 4th-best prospect.

Andrus only batted .244/.330/.335 for the Myrtle Beach Pelicans in 2007, though he stole 25 bases in 32 tries. He still was chosen for the 2007 Futures Game. Pinch-hitting for Chin-Lung Hu in the 5th, he grounded out against Luke Hochevar and stayed in to play shortstop. In the 7th inning, Andrus struck out versus Clay Buchholz. Later that year, he was dealt with Jarrod Saltalamacchia, Beau Jones, Neftali Feliz and Matt Harrison to the Texas Rangers in exchange for Mark Teixeira and Ron Mahay. Going to the Bakersfield Blaze, Andrus hit .300/.373/.369 and stole 15 bases in 23 attempts in 27 games. Assigned to the Grand Canyon Rafters in the Arizona Fall League, Andrus batted .353/.411/.471. He played for the World team again in the 2008 Futures Game. This time, he started at shortstop and hit second. In the first inning, he hit a potential double-play grounder but was able to reach thanks to an error by US shortstop Jason Donald. Elvis stole third and came home on a Pablo Sandoval grounder for the winning run in a 3-0 victory. He walked against Brett Anderson in the third but was picked off. Ramiro Pena replaced him at short. During the 2008 campaign, Andrus hit .295/.350/.367 for the Frisco RoughRiders with 54 steals in 70 tries and 82 runs. He led Texas farmhands in steals and was five swipes behind Texas League leader Corey Wimberly. Named the loop's All-Star shortstop, Andrus led the TL's shortstops in putouts (181), assists (361), errors (32) and double plays (79). Baseball America rated him the best defensive shortstop and the best infield arm in the Texas League. The publication also rated him the #5 prospect in the TL behind only Dexter Fowler, Chris Davis, Kyle Blanks and Vin Mazzaro.

In 2009, Elvis won the job as the Rangers' starting shortstop in spring training. There was some controversy attached to the decision by manager Ron Washington, as it meant moving Michael Young, who had won the 2008 Gold Glove Award, to third base. He went 1 for 4 with a double and a run scored on Opening Day against the Cleveland Indians. He had a decent first season in the majors, playing excellent defense at shortstop and hitting .267/.329/.373 in 145 games, with 33 stolen bases in 39 tries. He was the second-youngest player in the 2009 AL behind only Rick Porcello. He finished second in voting for the 2009 American League Rookie of the Year Award, losing out to Andrew Bailey in a fairly close race. He hit only .247/.287/.321 in winter ball for the Navegantes del Magallanes.

In 2010 Andrus maintained his batting average and improved his on-base percentage from .329 to .342 over his rookie year, but his power went down significantly. In 588 at-bats, he managed only 18 extra-base hits (15 doubles and 3 triples to slug .301), losing 5 triples and 6 homers over the previous year in more plate appearances. He continued to play excellent defense and scored 88 runs as the Rangers not only won their first ever postseason series, but made it all the way to the World Series. Andrus hit .333 in each of the first two rounds of the postseason, although his bat was stymied by the San Francisco Giants in the Series. He also appeared in the 2010 All-Star Game, pinch-running for Derek Jeter in the 6th and replacing him at short in a 3-1 loss. He was caught stealing by Brian McCann, then grounded out later against Brian Wilson. For the season, he tied for 9th in the league with 32 steals (even with Coco Crisp), tied Chone Figgins for the most sacrifice hits (17), and tied Figgins for second in times caught stealing (15, 2 behind Juan Pierre).

Elvis ended his 705 at-bat home run drought in the fourth game of the 2011 season, going deep against Erik Bedard of the Seattle Mariners on April 4th. He hit .279/.347/.361 in 150 games, collecting 164 hits, including 27 doubles and 5 homers. He scored 96 runs and stole 37 bases in 49 tries. He was 5th in the AL in steals (between Jacoby Ellsbury and B.J. Upton), third in sacrifice hits (16), tied for fourth in times caught stealing (even with Upton), second in putouts at shortstop (245, behind Alcides Escobar), 3rd in assists at short (407), first in errors at short (25) and tied for first in double plays by a shortstop (102, even with Erick Aybar). The Rangers returned to the World Series that year, with Andrus starting each of their 17 postseason games at shortstop. He went 6 for 25 with 4 runs scored as they defeated the Detroit Tigers in the ALCS, and then 8 for 29 (.276) with 5 runs in a crushing seven-game loss to the St. Louis Cardinals in the Fall Classic. 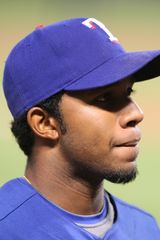 In 2012, Andrus played 158 games as the Rangers' starting shortstop, being selected to the All-Star Game for the second time. In the All-Star Game, he replaced Miguel Cabrera at third in the 9th inning and had one assist. In his trip to the plate, he hit into a force against Wade Miley. He hit .286/.349/.378 with 85 runs scored, banging out 180 hits, 31 doubles and 9 triples, all of these personal bests. In the final weeks of the season, the Rangers brought up the team's top prospect, Jurickson Profar, another shortstop, who impressed with his bat at a very young age, although Andrus continued to be the starter. Meanwhile, the Rangers, who had led the AL West race for most of the season, lost the division to the Oakland A's on the season's final day and were forced to play the first American League Wild Card Game against the Baltimore Orioles. Andrus did his part, going 2 for 4, but Texas lost the game, 5-1. For the season, he was among the league leaders in triples (2nd, one behind Austin Jackson), putouts at shortstop (4th, 233), assists (4th, 414) and errors (3rd, 16, behind Escobar and Asdrubal Cabrera). Playing winter ball for the first time in three years, he batted .234/.342/.344 for Magallanes and had nearly a .500 OBP in the postseason as the team won it all. He did not accompany them to the 2013 Caribbean Series.

There were plenty of trade rumors involving both Andrus and Profar in the offseason, but when spring training opened in 2013, both were still with the Rangers. On February 28th, Andrus added his name to the list of baseball's most unusual injuries, bowing out of a Cactus League game with "sensitivity and muscle soreness" in his left shoulder. He had just gotten a tattoo, running from the top of the shoulder to the biceps, commemorating his late father. A few days later, he joined the Venezuelan national team for the 2013 World Baseball Classic. The Rangers ended all speculation about his future on April 4th when they signed him to an eight-year contract extension worth $120 million through 2022, with an option for an additional year. In the meantime, Profar was sent to AAA to complete his minor league apprenticeship, leaving Andrus in his familiar position as the starting shortstop on Opening Day. On May 18th, Andrus made a bid for a cycle in leading the Rangers to a 7-2 win over the Detroit Tigers. He had four hits in his first four at-bats, scoring three runs, driving in two and stealing a base, then came up again in the 8th needing a home run. He swung hard on the first three pitches but was not able to drive a pitch out, notching a third single to finish with a 5-for-5 day at the plate. He hit .271 in 156 games that season with 91 runs scored, 4 homers and 67 RBI.

Andrus remained the Rangers' starting shortstop from 2014 to the start of the 2018 season, hardly ever missing any time: the fewest games he played during those four season was 147 in 2016. Texas won back-to-back division titles in 2015 and 2016, but both years exited the postseason in the Division Series after losing to the Toronto Blue Jays. He was just 4 for 22 in the 2015 ALDS, but his 4 for 11 performance with a triple and a homer was for naught in the 2016 ALDS as the Rangers were swept in three games. In the regular season, he had his best year in 2016, when he hit .302 with 8 homers and 69 RBI, for an OPS+ of 110, the first time in his career he had been above 100. He repeated that feat in 2017, hitting .297 with surprising power - 44 doubles and 20 homers - scoring a career-high 100 runs and driving in 88, another personal best. This allowed him to overcome the fact he drew just 38 walks, as he finished with an OPS+ of 108. He did lead the AL in caught stealing with 10, something he had also done in 2014 with 15, while stealing between 24 and 27 bases each of the four seasons in that span.

He came back as the team's starter at shortstop in 2018, but on April 11th, he was hit by a pitch from Los Angeles Angels reliever Keynan Middleton and broke his right elbow, putting him on the disabled list. He was off to a good start, hitting .327 with 2 homers and 5 RBI in 14 games. When he returned in June, he scuffled, finishing the season with a .256/.308/.367 line behind 6 homers and 33 RBI in 97 games, his lowest total to that point. He showed modest improvement in a full tilt in 2019, racking up a .275/.313/.393 line, chipping in 12 homers and 72 RBI in 147 games. However, the improvement was largely an illusion, as both seasons were worth an equal OPS+ of 78. In 2020, he lost his starting job during the pandemic-shortened season, appearing in just 29 games and hitting .194 with 3 homers and 7 RBIs. His OPS+ fell even further, to 58, the worst of his career by a long shot.

He was clearly no longer in the Rangers' future plans at that point, and on February 6, 2021, he was traded to the Oakland Athletics in return for another former star whose luster had paled, slugger Khris Davis, as well as two prospects, C Jonah Heim and P Dane Acker, while C Aramis Garcia accompanied Elvis to the Bay Area. Andrus was joining a team that had just lost its starting shortstop, Marcus Semien, who had left via free agency, so there was an opportunity for him to claim some regular playing time again - if he could still produce.