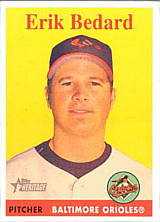 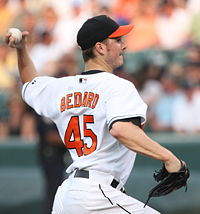 Érik Bédard was a left-handed starting pitcher who pitched eleven seasons in the big leagues. He was born in Navan, ON, Canada, into a French-speaking family and was drafted by the Baltimore Orioles in the sixth round of the 1999 amateur draft. His hard fastball and late breaking curve helped him to briefly become the ace of the Orioles' rotation. Bédard pitched the best game of his career in July 2007, striking out 15 Texas Rangers hitters while allowing just two hits and no walks in a complete game shutout.

After signing in 1999, Bédard was on the fast track to the major leagues. He made 8 appearances for the GCL Orioles in 1999, and had a 1.86 ERA with 41 strikeouts over 29 1/3 innings. He won 9 games and struck out 131 hitters in A ball in 2000. In 2001, Bédard struck out a remarkable 130 batters in just 96 1/3 innings for the Frederick Keys. He excelled in Double A during the 2002 season, and even saw action with the Orioles. He made two outings for the big club and struck out one batter. Unfortunately, an arm injury derailed his quick rise and Bédard was placed on the disabled list in May 2003. The southpaw came back strong in 2004, starting 26 games for Baltimore with a 6-10 record, 4.59 ERA and 121 strikeouts in 137 1/3 innings while walking 71. He started to settle the control problems in 2005, walking 57 hitters in 141 2/3 innings. A knee injury sidelined him for nearly two months and he was limited to a 6-8 record. He finally started to break out for the Orioles in 2006, making 33 starts and winning 15 games. High pitch counts shortened a number of his outings, but Bédard showed great potential. He struck out 171 hitters and posted a 3.76 ERA. He was particularly strong in July when he posted a 1.54 ERA and 35 strikeouts over five starts. The Orioles failed to contend in 2007, but Bédard turned in a solid season. He won 13 games, held opponents to a .212 batting average, recorded 221 strikeouts, and put up a 3.16 ERA. Unfortunately, a strained rib cage muscle ended his season in early September. At the time of his injury, he was leading the American League in strikeouts, but finished third overall.

After the season, Baltimore sent Bédard to the Seattle Mariners for Adam Jones, George Sherrill, Chris Tillman, Tony Butler and Kam Mickolio, in a deal that became rather lopsided for the O's with the emergence of Jones in their outfield, excelling for nearly a decade at Camden Yards. Bédard made only 15 starts in 2008, going 6-4, 3.67 for the Mariners. In 2009, injuries once again limited him to 15 starts, the result being a 5-3 record and an excellent 2.82 ERA. After missing the second half of 2009 and making only a handful of minor league appearances on rehabilitation assignments in 2010 following shoulder surgery on August 14, 2009, Bedard returned to the mound on April 4, 2011 against the Texas Rangers. He got a rough welcome back to the big leagues, as shortstop Elvis Andrus, the second batter he faced, took him deep for his first homer in more than a year. He then gave up up a two-run triple to Julio Borbon the next inning. Overall, he gave up 5 runs on 4 hits - all for extra bases - in 5 innings. He settled down after that first start and became a key part of a very solid Mariners' starting rotation that kept them in surprise contention for first place in the AL West in the first months of the year. After 15 starts, Bédard was 4-6, but with an excellent 3.00 ERA and 85 strikeouts in 90 innings. That's when he was placed back on the DL on June 29, with a sprained left knee. Even though his two other seasons in Seattle had ended after 15 starts, the M's were confident Bédard would be available to pitch again immediately after the All-Star break, in effect missing only one start. That proved to be optimistic, as he only came back in late July; in the meantime, the Mariners collapsed completely, losing a franchise-record 17 consecutive games while the Franco-Ontarian was on the sidelines. Bédard was rocked in his first start back from the disabled list on July 29, giving up 5 earned runs in 1 1/3 innings against the Tampa Bay Rays and being charged with a loss.

Still, the Boston Red Sox took a gamble on him at the trading deadline on July 31, sending prospects Chih-Hsien Chiang, Tim Federowicz, Stephen Fife and Juan Rodriguez to the M's to acquire Bédard and pitcher Josh Fields. The Mariners turned around and sent Federowicz, Fife and Rodriguez to the Los Angeles Dodgers for Trayvon Robinson. Érik made 8 starts for the Red Sox and pitched relatively well, with a 4.03 ERA and 38 strikeouts in as many innings, but his record was only 1-2 and he was part of a team that collapsed utterly down the stretch, losing what appeared to be a sure hold on the American League wild card to the Rays on the season's last day. Érik's stay in Boston was short-lived. In 2012, he signed as a free agent with the Pittsburgh Pirates. He pitched well at first, with a 2.48 ERA in April and 3.91 in May, but wins were few, and his ERA kept going up in the following months. As he failed to right things, the Pirates released him on August 28, after he had made 24 starts with a record of 7-14, 5.01. He was leading the National League in losses at the time he was let go, and eventually finished tied for second, one behind leader Tim Lincecum. All was not negative, however, as he was generally healthy, pitching 125 2/3 innings and striking out 118 batters.

On January 21, 2013, it was the Houston Astros' turn to give Bédard a shot, signing him to a minor league contract with an invitation to spring training. The fact that he did not have a guaranteed job going into the season meant that he could not make himself available to pitch for Team Canada in the 2013 World Baseball Classic. He did make the Astros' staff, and on Opening Day, March 31, he pitched 3 1/3 scoreless innings in relief of Bud Norris to pick up his first career save as the Astros defeated the Rangers, 8-2, in their first game as an American League team. One of the few bright spots for the Astros in the early going, Bédard was solid in his first start on April 9. Facing the Mariners he gave up only one hit and no runs in four innings and left with a 13-0 lead. Rookie Paul Clemens, who relieved him, was gifted the win in his big league debut, even though he pitched quite poorly. Bédard had a nightmarish start against the Oakland A's on April 15: he walked the first three batters he faced, but struck out Jed Lowrie for the first out and then threw a wild pitch; he issued another walk to re-load the bases, then gave up a two-run double to Brandon Moss followed by Nate Freiman's first major league homer, good for another three runs, before once again giving way to Clemens. The A's won the game handily, 11-2, as Bédard was charged with the loss. He made six appearances (5 starts) in May, only giving up more than two runs in a game once during the month, but he did not have a single decision, as the Astros' offense was anemic in support of his solid efforts. It took until June 3 to earn his first win, which came against the Los Angeles Angels of Anaheim; he gave up only a run in 7 innings for a 2-1 win. After two months of losing steadily, it was the team's sixth consecutive win and capped a four-game sweep of the Angels. Bédard had a game that epitomized his season against the Mariners on July 20: he gave up no hits and no walks through the first five innings and had a 2-0 lead entering the 6th. He then gave up back-to-back walks after one out, and both runners came to score without the benefit of a hit, thanks to a pair of passed balls and a sacrifice fly, before he allowed another walk and completed the inning. In the 7th, he allowed two more walks and left after two outs, having reached his pitch count limit. The first batter faced by reliever Jose Cisnero, Michael Saunders, hit a double to the hill in center field at Minute Maid Park for a two-run double which turned out to be the only hit of the game for the M's. Bédard's line showed 6 2/3 innings, 0 hits, 5 walks and 10 strikeouts, but a loss, putting him at 3-7 for the year. He finished the year at 4-12, 4.59, pitching 151 innings in 32 games.

On February 14, 2014, he signed as a free agent with the Tampa Bay Rays. On May 4, he ended a streak of 15 starts without a win, dating back to the previous season, when he defeated the New York Yankees, 5-1. He followed that with a beauty of a start on May 10, allowing only a hit over 6 innings in a 7-1 win over the Cleveland Indians. His resurgence could not have come at a better time for the Rays, as three of the team's projected starters were out of action at the time. Although he pitched well, wins did not come easily. On May 21, he gave up a single hit to the Athletics in 5 1/3 innings - a solo homer to Brandon Moss - but the A's scored two other runs on a couple of walks and a pair of errors, and he was saddled with a 3-2 loss in which Moss's homer was the A's lone hit. With some of the injured pitchers coming back and the Rays making a push to get back into the wild card race, Bédard was designated for assignment on July 28th; his record stood at 4-6, 4.76 in 17 games, including 15 starts. He did not pitch again that season. On January 18, 2015, he signed a minor league contract with the Los Angeles Dodgers. After sustaining an injury to a lateral muscle, he made three starts with the Rancho Cucamonga Quakes of the Class A California League on a rehabilitation assignment before announcing on June 11 that he was calling it a career at age 36.