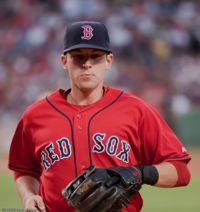 Shortstop Jed Lowrie made his debut with the Boston Red Sox in 2008.

Lowrie hit .292/.349/.349 as a college freshman in 2003, winning the starting second base job mid-season and forming a freshman right side of the infield with John Mayberry Jr.. Stanford made it to the finals of the 2003 College World Series, though Carlos Quentin and Ryan Garko were far more vital contributors than Lowrie and Mayberry; they lost 3 games to 2 to Rice University in the finals.

In 2004, Jed emerged as a star. He hit .399/.505/.734 and won the Pacific-10 Conference Triple Crown. He beat out Dustin Pedroia by six points in batting average, outhomered Mayberry and Danny Putnam by one with 17 and drove in 68 to tie Grant Richardson for the Conference lead. Lowrie did not make the All-Conference team but was named Player of the Year. Both Baseball America and Collegiate Baseball rated him as the first-team NCAA Division I All-American at second base. He tied for 12th in NCAA Division I in total bases (171). Jed joined Mayberry on the USA College National team for the 2004 World University Championship, where he went 2 for 14 with a double, triple and 3 RBI for the winning team.

Lowrie batted .317/.416/.594 in his junior year and joined Brent Lillibridge and Josh Satin on the All-Conference team as an infielder.

He was selected by the Boston Red Sox in the 2005 amateur draft, with the 45th overall pick of the first round. The 4th #1 selection by Boston that year, the pick was compensation for the loss of Orlando Cabrera to free agency. Lowrie was signed by scout Nakia Hill for $762,000.

He made his pro debut that summer with the Lowell Spinners, where he hit .328/.429/.448 in 53 games. He was sixth in the New York-Penn League in average but led the league in OBP. Baseball America rated him the league's #7 prospect, right behind teammate Jacoby Ellsbury. Lowrie spent the next season with the Wilmington Blue Rocks and hit .262/.352/.374 with 3 homers and 50 RBIs. Baseball America ranked him the #20 prospect in the Carolina League.

In 2007, he split the season between the AA Portland Sea Dogs and the AAA Pawtucket Red Sox. He put up an excellent line of .298/.393/.503 in 133 games between the two stops, including an outstanding OBP of .410 at Portland, moving him further up the prospect rankings. Baseball America named him the #8 prospect in the Eastern League (between Alan Horne and Neil Walker). They also ranked him as the 5th-best International League prospect after Jay Bruce, Homer Bailey, Matt Garza and Josh Fields and just ahead of teammate Jacoby Ellsbury. He tied for 4th in the affiliated minor leagues with 47 doubles.

He did not make a strong Red Sox team in spring training 2008, but was called up to the American League on April 11 when starting third baseman Mike Lowell was placed on the disabled list. He was hitting only .160 in 8 games for Pawtucket at the time.

Lowrie played his first major league game on April 15, 2008 as Boston's starting third baseman against the Cleveland Indians and drove in three runs in a 5-3 victory. He batted eighth and played third base. Lowrie struck out against Paul Byrd in his first major league at-bat. Coming up in the 5th, he ground in Jacoby Ellsbury to break a scoreless tie. Down 2-1 in the 7th, Lowrie singled home Kevin Youkilis and Ellsbury with a hit off of Jorge Julio. He hit .258 in 81 games in his rookie season, then .364 in the Division Series before faling to .111 as the Red Sox lost to the Tampa Bay Rays in the ALCS. He was expected to become a star in the major leagues, but his career took some unexpected detours. He hit just .147 in 32 games in 2009 and then went 0 for 2 in the Division Series, but then bounced back with a very solid year in 2010 when he hit .287 with 9 homers and 24 RBIs in 55 games, putting up an OPS+ of 139. It was just a blip, though, as in 2011 he was beck to hitting .252 wit 6 homers and 36 RBIs in 88 games, with his OPS+ falling back to 83.

The Red Sox decided he was not going to develop into a star after all at that point, and following the 2011 season traded him to the Houston Astros as part of a deal to acquire reliever Mark Melancon. In spite of putting up just a 244 batting average for a dreadful Astros team in 2012. In 97 games, he hit 18 doubles and 16 homers, scored 43 runs and drove in 42 and put up an OPS+ of 107. He was the team's principal shortstop that season, but after just one year in Texas was traded to the Oakland Athletics as part of a five-player deal on February 4, 2013 that also included Chris Carter and Brad Peacock. He spent two years as the A's main shortstop. The first of these was excellent, as he hit .290 with 45 doubles and 15 homers, scored 80 runs and drove in 75 in 154 games, for an OPS+ of 119. But he fell significantly in 2014, to .249 with 6 homers and 50 RBIs in 136 games, his OPS+ falling below average to 94. He played in the postseason both years, but hit just .150 as the A's lost to the Detroit Tigers in the 2013 ALDS, and was 0 for 5 in the 2014 Wild Card Game loss to the Kansas City Royals.

Lowrie returned to Houston in 2015 as a free agent, just in time to witness the arrival of top prospect Carlos Correa to take over the shortstop position and the Astros surge to the top ranks of the American League. he played mainly third base after being displaced from shortstop that year, hitting .222 in 69 games, but with enough power and walks to bring his OPS+ to 97 - respectable for a back-up infielder. He returned to the postseason that year, but went just 0 for 4 as the Astros lost to the Royals in the Division Series. After a trade for minor leaguer Brad McCurry,he was back with Oakland in 2016, now playing principally at second base. His average rose to .262 that season, but otherwise, every other number was down, as his OPS+ plummeted to 77. But just like it looked like he was reaching the end of the road, he came back with two All-Star caliber seasons in 2017 and 2018, with an OPS+ of 120 both years. the first went pretty much under the radar, as the A's were completely out of the running, but he did hit 49 doubles and 14 homers, scored a career best 86 runs and had an OBP of .360. In 2018, he was one of the offensive leaders of a surprisingly solid A's team that gave the Astros a run for their money in the AL West, making it to the Wild Card Game. He made the All-Star team for the first time at age 34 as he hit .267 with 23 homers and 99 RBIs in 157 games. He also hit 37 doubles and scored 78 runs. He once again failed to do much in the postseason, though, as he was 0 for 4 with a run scored in Oakland's loss to the New York Yankees in the Wild Card Game.

On January 10, 2019, he signed a two-year contract with the New York Mets for $20 million, cashing in on his belated emergence as one of the best-hitting middle infielders in the majors. This meant his home ballpark would be Citi Field, where he had the distinction of hitting the first-ever homer. It was a grand slam off Oliver Perez in a exhibition game pitting the Red Sox against the Mets on April 4, 2009. However, he missed the first five months of the season, first experiencing pain in his left knee in spring training. He was expected to return in May, but then injured a hamstring and strained his right calf. He was limited to 12 minor league rehabilitation games before being finally activated on September 7th.