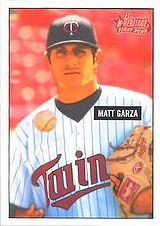 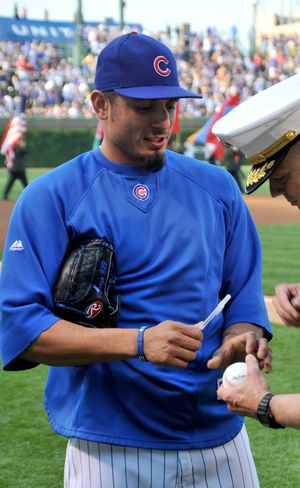 Garza was to pitch for the US in the 2007 Futures Game but was called up to the majors. Kevin Mulvey took his roster spot. Instead, he pitched the remainder of the year for the Twins, going 5-7 in 15 starts with a solid 3.69 ERA. After the season, he was included in a big trade with the Tampa Bay Rays, alongside shortstop Jason Bartlett in return for outfielder Delmon Young and infielder Brendan Harris; the trade was unusual in that both sides included a top draft pick who had just established himself in the major leagues.

Matt Garza was a major contributor to the Rays' unexpected surge to the top of the American League in 2008. He made 30 starts for his new team, with a superficially unremarkable 11-9 record, but his 3.70 ERA and 128 strikeouts in 184 innings were a better indicator of how well he pitched. He lost his only start in the ALDS, but was outstanding against the Boston Red Sox in the Championship Series: in two starts, he gave up only 2 earned runs on 8 hits in 13 innings and was credited with two wins, including the clinching Game 7 that sent the Rays to the 2008 World Series. His performance earned him the ALCS MVP honors.

On July 26, 2010, Garza pitched the first no-hitter in the history of the Tampa Bay Rays, blanking the Detroit Tigers, 5-0; he allowed only a walk in the game, to Brennan Boesch who was immediately erased on a double play, and faced the minimum 27 batters in the gem. He finished the season with a record of 15-10, 3.91 as both he and David Price beat the previous franchise record for wins in a season, held since 1998 by Rolando Arrojo. He also struck out 150 batters in 204 2/3 innings and recorded the first save of his career in an emergency appearance out of the bullpen. In the postseason, he gave up only 1 run in 6 innings in his only start of the ALDS against the Texas Rangers but was not involved in the decision as the Rays bowed out in five games. After the season, with the Rays rich in starting pitchers both at the major league and minor league level, he was traded to the Chicago Cubs along with two minor leaguers in return for five prospects.

Expected to be the ace of the Cubs' staff, Garza joined the team at a time it was on a downward trend, and as a result, only had a 10-10 record in 2011 in spite of putting up a 3.32 ERA in 198 innings over 31 starts and striking out a career-high 197 batters. In 2012, things went worse, as injuries limited him to 18 starts, during which he went 5-7, 3.91. It was still his sixth straight season with an ERA+ above 100, but playing in front of a very weak team, it was hard for him to win any games, and as a result he gave the appearance of having fallen into mediocrity even though he was still pitching well. More bad news came in spring training in 2013, as Garza was bothered by a pulled muscle in his side, forcing him to miss the opening of the season. He only made his debut on May 21st, then started slowly, going 1-1, 4.98 in his first 6 starts. However, he then rolled off five consecutive winning starts in spite of pitching in front of a very mediocre team. His record was 6-1, 3.17 when he was traded to the Texas Rangers on July 22nd, in return for youngsters Mike Olt, C.J. Edwards and Justin Grimm and at least one player to be named. He was a winner in his first outing for the Rangers on July 24th, defeating the New York Yankees, 3-1, while pitching into the 8th inning. He made 13 starts for the Rangers, going 4-5, 4.38, to finish the year with an overall record of 10-6, 3.82.

On January 26, 2014, Garza signed a four-year free agent deal with the Milwaukee Brewers worth $50 million, with an option for a fifth year at $13 million. Interestingly, various media outlets had announced that such a deal had been made four days earlier, but the Brewers took the unusual step of denying a deal had been reached, only to confirm his signing for the same terms less than a week later. In spite of the snafu, it was clear that Garza was still considered a potential top of the rotation starter, and that teams were willing to pay him accordingly in spite of his spotty record since leaving the Rays. In his first start for the Brewers on April 2nd, he was locked in a pitching duel with Aaron Harang, who was making his first start for the Atlanta Braves. The game was scoreless after 6 innings, with Harang working on a no-hitter, but Garza gave up a solo homer to Chris Johnson in the 7th for the only run of the game, leaving Garza with the loss. He ended up making 27 starts for the Brewers and pitching 163 1/3 innings, but his record was a disappointing 8-8, 3.64 and he missed most of August with an injury, during which time the Brewers went from division leaders to also-rans in the NL Central.

Garza started the 2015 season slowly, as did the Brewers, who had the worst record in the National League in the early going. After 10 starts, he was 2-7, 6.00 and leading the NL in losses. Manager Craig Counsell decided to give him an extra day's rest to help him turn things around, moving him out of a scheduled May 31st start in favor of top pitching prospect Tyler Wagner, who was making his major league debut. However, Wagner was chased early and the game went deep into extra innings, taxing the Brewers' bullpen and forcing Matt to take over on the mound in the 13th inning, his first relief appearance since he had earned a save as a member of the Rays in 2010. He ended up pitching five scoreless innings and picking up the win as Milwaukee came out on top, 7-6, on a walk-off homer by Martin Maldonado in the 17th inning in what was the longest game in terms of time in the history of Miller Park at 5 hours and 49 minutes. However it was a rare highlight in what was otherwise a season to forget. He pitched 148 2/3 innings as the Brewers continued to use him in spite of his poor results, until September 6th, when they decided to move him to the bullpen to give some late-season call-ups a look as starters. Matt did not accept the decision and went home to California where his wife was undergoing a difficult pregnancy (she gave birth to twins six weeks later). He finished the year with a record of 6-14, 5.63 in 26 games, all of them starts except for the single unusual relief appearance.

Garza patched things up to the Brewers and went into spring training in 2016 eager to put his nightmarish season behind him. He did better, but still finished with a record of only 6-8 in 19 starts and a 4.51 ERA, as he missed significant time due to injuries. He was limited to 101 2/3 innings, his lowest total since 2007. In 2017, he made 22 starts in 24 appearances, again missing a few patches, and finished 6-9, 4.94, for a much-improved Brewers team that was in contention for the postseason until late September. He again had trouble pitching late into games, totaling just 114 2/3 innings and allowed a lot of traffic with 121 hits and 45 walks. He became a free agent after the season. He underwent shoulder surgery in January 2018 and ultimately retired when no team signed him.