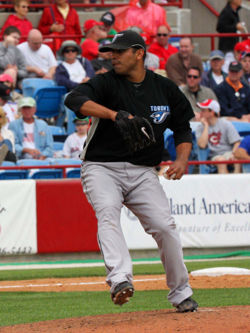 Ricky Romero played for Garfield High School for three years before transferring to Roosevelt High for his senior year.

Romero was signed by the Toronto Blue Jays and scout Demerius Pittman as the team's first round pick in the 2005 amateur draft with the sixth overall selection. He made his pro debut that year with the Auburn Doubledays, pitching 2 scoreless innings before being promoted to the Dunedin Blue Jays, where he went 1-0 with a 3.82 ERA in 8 starts. He returned to Dunedin to begin the 2006 season and went 2-1 with a 2.47 ERA in 10 starts with the club. He was then promoted to the New Hampshire Fisher Cats, where he was 2-7 with a 5.08 ERA in 12 starts.

Romero made his Major League debut on April 9, 2009, pitching for the Blue Jays at home against the Detroit Tigers. He threw for six innings, allowing only two runs in the game; he earned the credit for the 6-2 win. He gave up seven hits and two walks while striking out five. His parents and three siblings were in the stands to watch him play his first game in the Bigs. His opponent on the mound in this game was fellow first-round draft pick Rick Porcello, who was also making his major league debut. On April 19th, he pitched 7 shutout innings against the Oakland A's, combining with Scott Downs and B.J. Ryan for a 1 - 0 shutout victory; that game followed a start the previous week in which he only gave up two runs to the Minnesota Twins and brought his season's ERA down to a sparkling 1.71. Unfortunately for him, though, his name was placed on the disabled list on April 23rd, retroactive to April 20th, with a strained muscle in his right side; the injury came only a few days after fellow Jays starter Jesse Litsch, had been placed on the DL, and immediately before closer B.J. Ryan's name was added as well. He went 13-9, 4.30 as a rookie, then followed that with a record of 14-9, 3.73 in 2010.

Romero really emerged as one of the American League's top pitchers in 2011, after being the Jays' Opening Day starter for the first time. That year, he was named to the All-Star team for the first time, then had a superb month of August. He earned the AL's Pitcher of the Month honors by going 5-0 with a 2.05 ERA during the month. He finished they eyar witha career-high 15 wins, against 11 losses, and a 2.92 ERA. In his first three seasons, he had won more games, lowered his ERA and increased his innings pitched and strikeouts each year. It looked like stardom was around the corner, but instead, it would all be downhill from that point on.

On August 21, 2012, Romero walked 8 batters while striking out none in a losing start against the Tigers. He was the first pitcher to do so in the American League since Jose Guzman in 1991. He had started the year 8-1, but from June 27th to September 12th, he lost 13 times in 14 starts (the other start ending in a no-decision). After another no-decision, he finally won a game on September 24th, 9-5 against the Baltimore Orioles. However, he had to leave his next start on September 29th after three innings with discomfort in his left knee. His season thus ended with a record of 9-14, 5.77, and a major-league leading 105 walks. Not only was his ERA almost three runs higher than the previous season, it was the highest by any major league pitcher who had pitched enough innings to qualify for the ERA title that season.

The Blue Jays went on a shopping spree before the 2013 season, and many of their acquisitions were starting pitchers. As a result, Romero went into spring training as the nominal fifth starter - a huge downfall after starting on opening day the previous two years. But he could not even keep that spot, and on March 26th the team announced that he would be sent to the Florida State League to work on his mechanics, while J.A. Happ would fill the empty slot in the starting rotation. He made only one start for Dunedin, allowing a run in 7 innings, before being called back to Toronto to take the place of one of the off-season acquisitions, Josh Johnson, who had been ineffective and then was placed on the disabled list with a triceps injury. In the meantime, the Blue Jays were mired in last place in the AL East. In his first start, he lasted only 4 innings against the Seattle Mariners on May 3rd and was tagged with a 4-0 loss, then on May 8th disaster struck, as he gave up 3 runs on 4 hits and 2 walks while retiring only one batter in a start against the Tampa Bay Rays. He was immediately sent back to the minors, this time to the AAA Buffalo Bisons, with his record at 0-2, 12.46. He pitched a couple more times in relief that season, lowering his ERA to 11.05, and was an unconvincing 5-8, 5.78 in 22 starts for the AAA Buffalo Bisons.

In 2014, Romero made only 9 starts for Buffalo and went 0-3, 5.50 before his season ended with a couple of surgeries. He did not come back until late in 2015, when the San Francisco Giants signed him and sent him to the AZL Giants, where he went 0-2, 5.62 in 4 starts. In spite of his lack of recent success, he was a non-roster invitee in spring training with the Giants in 2016. He only made 2 starts for the Sacramento RiverCats that season, going 0-0, 4.50. In 2017, he began the year going 0-2, 6.75 in 4 starts for Sacramento and was released. Having exhausted the interest of major league organizations, he then moved to the Mexican League, where he made 12 relief appearances with the Toros de Tijuana, putting up an ERA of 5.40 in 15 innings, as a comeback to the big leagues looked ever more elusive. He did not pitch at all in 2018, then in January 2019 made his retirement official.