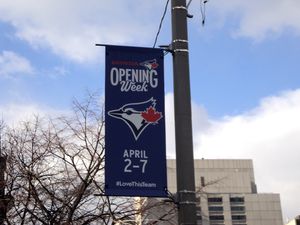 Banner for the 2013 Blue Jays in Toronto.

After some big trades in the off-season, the 2013 Toronto Blue Jays also brought back a well-known manager for another kick at the can. Former manager John Gibbons rejoined the club, after spending time with the Kansas City Royals and San Diego Padres since he had left Toronto in 2008. The managerial job came open when the 2012 incumbent, John Farrell had decided to accept an offer to manage the Boston Red Sox.

Gibbons came in with an unusual expectation for a Blue Jays manager of recent vintage: win now. Indeed, most prognosticators picked the Jays to finish first in the AL East after General Manager Alex Anthopoulos's big off-season, during which he pulled off two blockbuster trades in which he acquired a slew of All-Star-caliber players. In the first trade, he picked up SS Jose Reyes, Ps Mark Buehrle and Josh Johnson, 2B Emilio Bonifacio and C John Buck from the Miami Marlins in return for IFs Yunel Escobar and Adeiny Hechevarria, C Jeff Mathis, P Henderson Alvarez and a number of prospects, and in the second, he flipped Buck and some more prospects, led by C Travis d'Arnaud, to the New York Mets for 2012 National League Cy Young Award winner R.A. Dickey and Cs Josh Thole and Mike Nickeas. If that wasn't enough, he also signed disgraced but productive OF Melky Cabrera to a free agent contract and acquired reliever Esmil Rogers from the Cleveland Indians in return for IF Mike Aviles, obtained as compensation from Boston for Farrell's signing. It was thus a completely revamped Blue Jays team that took the field for Opening Day in 2013. 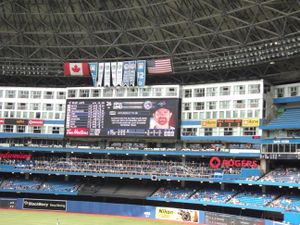 The video board at Rogers Centre, showing the new banners for HOF'er Alomar. Below is the renovated restaurant (the windows having been removed), and the large Budweiser and Rogers signs.

In their first three games at home, Toronto dropped two (including the Home Opener) against the Cleveland Indians. With such high expectations about the club, there was a vocal response in the local media from disappointed fans. Commentators reminded the city to "step back from the ledge" and settle in for what could still be an exciting season. The month of April was horrible for the club, though, as they finished dead last in the AL East with a record of 10-17. Their highly touted starting rotation wasn't able to deliver, and the club finished with one of their worst starts since 2003. The chief culprits were the three new starting pitchers: Dickey was 2-4, Johnson 0-1 and Buehrle 1-2, with holdover Brandon Morrow going 0-2; among the four, Dickey had the lowest ERA at 4.50. Only J.A. Happ pitched well, going 2-2, 3.68 after beating out the previous year's opening day starter, Ricky Romero, for the fifth starter job in spring training. Also crucial was the ankle injury suffered by Reyes on April 12th. He was replaced by Munenori Kawasaki, who showed a lot of enthusiasm and good instincts, but also only hit .217 with only a pair of extra-base hits. Generally the Jays were hitting plenty of home runs, but not doing anything else very well on offense, with a team batting average under .230 and an OBP under .300, a source of concern when their starting pitchers were being beaten around game after game.

Things went from bad to worse with the starting pitching in early May. First, Johnson had to be placed on the disabled list with an inflamed triceps on May 2nd, and the prognosis was for him to miss at least a month. Ricky Romero was recalled from the minors to take his place, but he made just two awful starts, losing both while pitching a total of 4 1/3 innings with an ERA of 12.46 before getting sent back to the bushes. Worst, J.A. Happ suffered a scary injury on May 7th, when he was struck in the head by a ball off the bat of the Tampa Bay Rays' Desmond Jennings and laid bloodied on the ground for 10 minutes before being taken off the field on a stretcher. Fortunately, the extent of his injuries was limited, but he too was out for at least a month as a result. If that wasn't bad enough, Morrow had to be pushed back a day with back problems.

Things finally began to turn around in mid-May, as the pitching began to finally settle down. Johnson returned to the starting rotation, Dickey threw with more consistency, and Chien-Ming Wang was signed as a free agent and immediately inserted in the starting rotation, doing well. Another move that paid off was moving Esmil Rogers from the bullpen, where he had struggled, to the starting rotation in an emergency move on May 29th; he got better with each start, and allowed only 4 earned runs in his first 21 innings as a starter. Suddenly, the Jays had their first significant winning streak of the year, reeling off eight straight wins from June 11-19, including a four-game sweep of the Texas Rangers on the road, to move to one game below .500. The winning streak was their longest in five years, and they had gone 22-12 since May 11th, when they had hit their low point with a record of 13-24. Their 9th straight win, a 7-6 defeat of the Baltimore Orioles thanks to a two-out single by Rajai Davis in the bottom of the 9th on June 21st, brought them to .500 for the first time since Opening Day. Not content with that, they kept on winning, tying the club record with their 11th straight win on June 23rd, something which had only been done by the 1987 and 1998 editions of the team. Josh Johnson finally won his first game of the year that day, defeating the Orioles, 13-5. The streak ended with a 4-1 loss to the Tampa Bay Rays the next day. June 26th was another key date, as Jose Reyes returned to the line-up after missing more than two months, and R.A. Dickey pitched a magnificent two-hit shutout to defeat the Rays, 3-0. However, the Jays were not able to stay around .500 long, and when the All-Star break came on July 14th, they were back to being 4 games below .500, in last place in the AL East and already 11 1/2 games back of first place. 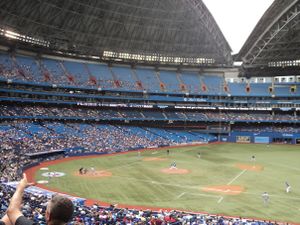 The Blue Jays had probably their worst stretch of the year immediately after the All-Star Game, as they lost 7 in a row and 9 of 10 to fall to 10 games below .500. Their seventh straight loss on July 24th was particularly painful, as they had a 3-2 lead against the Los Angeles Dodgers with 2 outs in the 9th when Colby Rasmus misplayed a soft single by Andre Ethier to allow the tying run to score; the Dodgers then pounded out 5 runs against a demoralized Jays team in the top of the 10th for an 8-3 win. Manager Gibbons commented after the loss: "I thought we were rock bottom last night, but I guess not." The Jays had managed to blow a late five-run lead to lose the previous day. Mark Buehrle stopped the losing streak with a two-hit shutout of the Houston Astros the next day. They followed that game with a 12-6 win over the Astros on July 26th that featured some of the best hitting performances in team history: they scored 8 runs in the bottom of the 8th, with Edwin Encarnacion becoming the first Jays player to homer twice in an inning since Joe Carter back in 1993, with his second homer being a grand slam. They also connected for 12 extra-base hits that night, tying a team record; for his part Jose Reyes reached base five times and had two of the extra-base knocks.

Toronto's hopes of a 2013 post-season were officially dashed with a 3-1 loss to the Orioles on September 15th, although the writing had been on the wall for weeks already. The wild card standings at that point did not allow for the Jays to move up enough to secure a berth, even if they had won every single one of the remaining games. The best the team could hope for was to finish at the .500 mark, and even that had become a long shot.

The Blue Jays' 2013 season officially came to an end at the Rogers Centre on Sunday, September 29th, with a 7-6 loss to the Tampa Bay Rays. Playing a line-up full of youngsters, they had won the previous two contests with the Rays, and had fought back gamely after falling behind, 6-0, in the 1st inning of the final game. Their final surge of pride had the result of forcing the Rays to play a one-game playoff against the Texas Rangers for the last postseason slot in the league. The club finished the season at the .457 mark, having gone 74-88. They were last in the AL East division, behind the four other clubs who all finished above the .500 mark. The Jays were 40-41 at home and an even worse 34-47 on the road. They were also 17 games out of the wild card position. By all measures, it was a highly disappointing season.