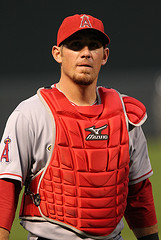 Jeff Mathis is a major league catcher. His brother Jake Mathis played in the minor leagues.

Jeff was selected by the Anaheim Angels in the first round of the 2001 amateur draft. He was signed by scouts Tom Kotchman and Hank Sargent and made his pro debut that summer. He played for the big league Angels from 2005 to 2011. He is considered an outstanding defensive catcher, blessed with a very strong arm and is excellent in blocking pitches. However, his hitting has always been below avergae, with a batting average of only .194 in seven season in Los Angeles, in spite of extensive playing time. He does have a bit of power however, with a high of 9 homers in 2008. He was at his best in the 2009 ALCS against the New York Yankees, when he hit .583 with 5 doubles in 5 games.

On December 3, 2011, Mathis was traded from the Los Angeles Angels of Anaheim to the Toronto Blue Jays for pitcher Bradley Mills. This was the second offseason in a row during which the Angels traded a catcher to the Blue Jays, following Mike Napoli the previous year. Mathis replaced Jose Molina as a back-up to J.P. Arencibia, a much better hitter but nowhere near as good as a defender, in 2012. On May 25th, however, he was asked to show other skills, making his first career pitching appearance in a mop-up role against the Texas Rangers. He pitched a scoreless 8th inning (although he gave up a walk and a hit) in a 14-3 loss. He was called to pitch once again on July 25th, this time with the Jays trailing the Oakland A's, 14-0, after 8 innings, By giving up a pair of runs this time, he ensured that his team suffered the most lopsided in franchise history, 16-0. He got to play more than expected when Arencibia missed a chunk of time with an injury later in the season, and logged in 71 games and 221 at-bats, hitting at a .218 clip with 8 homers and 27 RBI.

On November 13, 2012, Jeff was traded to the Miami Marlins in a blockbuster deal that saw a group of higher-priced veterans head to Toronto in return for a package of mainly young players. The Blue Jays obtained SS Jose Reyes, Ps Mark Buehrle and Josh Johnson, C John Buck and IF/OF Emilio Bonifacio in the deal, while Mathis was the oldest of the players obtained by Miami at 29. Accompanying him were IFs Yunel Escobar and Adeiny Hechavarria, P Henderson Alvarez and three minor leaguers. Not looking to contend, the Marlins were expected to accept Mathis's weak bat in return for his defense stabilizing what would be a very young and inexperienced pitching staff in 2013. However, his stay with his new team started badly, as in the first game of spring training, he was hit by a foul tip off the bat of the St. Louis Cardinals' Matt Holliday, breaking his right collarbone and putting him on the shelf for 6 to 10 weeks. He made his debut for his new team on May 16th, although young Rob Brantly had taken advantage of his absence to take over the starting job, which the weak-hitting Mathis could not wrest away from him. On June 30th, his bat did the talking however, as he blasted a walk-off grand slam against Tyson Ross of the San Diego Padres to give the Marlins a 6-2 win. The Padres had intentionally walked pinch-hitter Greg Dobbs to pitch to Mathis, and brought in Alexi Amarista as a fifth infielder to attempt to cut off the winning run at home, but Mathis countered their strategy by depositing a pitch in the left field seats at Marlins Park. He seemed to take a liking to being a hitting hero, as he came back the next day, July 1st, with a three-run double in the 6th that was key to a 4-0 win over the Friars. He ended the season at .181 with 5 homers and 29 RBIs in 73 games.

In 2014, he played 64 games backing up Jarrod Saltalamacchia who had been signed as a free agent to take over the Marlins' catching duty. He hit .200 with 2 homers and 12 RBIs. In 2015, injuries and the emergence of rookie J.T. Realmuto cut severely into his playing time, as he got into only 32 games, hitting .161 with again 2 homers and 12 RBIs. In spite of his weak contribution with the back, he was brought back again in 2016 and in a rare start on June 14th, he sent the Marlins on their way to a 5-2 win over the San Diego Padres with a 1st-inning grand slam off Drew Pomeranz. It was the third grand slam of his career.

On July 8, 2018, playing for the Arizona Diamondbacks, he was pressed into mound duty after catching the first 15 innings of a marathon game against the San Diego Padres. He did manage to get the first two outs in the 16th before Wil Myers tagged him for a homer that broke the 3-3 tie and sent the Padres on their way to a 4-3 win.