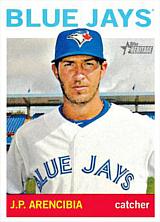 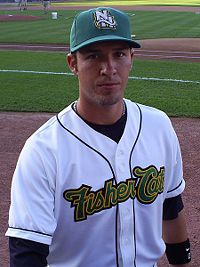 J.P. Arencibia was a first-round draft pick in the 2007 amateur draft. He hit two home runs in his major league debut on August 7, 2010 and played six big league seasons.

Arencibia hit .440 with 10 homers as a high school junior. He batted .500 as a senior with 7 homers. His 17 home runs tied the school record, held by Alex Rodriguez. The Seattle Mariners took him in the 17th round of the 2004 amateur draft but he opted for college instead. In 2005, J.P. hit .322/.379/.534. He won the Southeastern Conference Freshman of the Year Award, beating out future #1 overall draft pick David Price. Baseball America was one of two sources to list him as a first-team Freshman All-American. His 71 RBI tied him for 23rd in NCAA Division I. He starred for the USA college national team. One of only five freshmen on the team, he batted .404/?/.579 to lead in average and slugging. His 12 RBI tied Matt LaPorta and Shane Robinson for the club lead. Arencibia produced at a .352/.419/.583 clip as a sophomore. He made the SEC All-Conference team at catcher. He again starred for the USA college team, hitting .302/?/.655 with 37 RBI, second to Pedro Alvarez. He led the club with 9 homers and won MVP honors in the 2006 World University Championship, hitting .412/?/.618 with 4 HR and 23 RBI, the latter two both leading the tourney. The Cuban-American starred in the country of his parent's birth, as the tournament took place in Cuba. He hit .330/.450/.545 as a junior and was second-team All-SEC at catcher. Overall, he had batted .333/.413/.552 in his college career.

The Toronto Blue Jays picked Arencibia with the 21st selection of the 2007 amateur draft. He was signed by scout Matt Briggs for $1,327,500 and made his pro debut that summer. Assigned to the Auburn Doubledays, he debuted against the Batavia Muckdogs on June 20 and went 1 for 3. He hit .254/.309/.377 with only 3 homers in 63 games in a disappointing pro debut, with 18 passed balls, most in the New York-Penn League. Baseball America still rated him the league's #7 prospect, right behind Jordan Zimmermann and Ryan Kalish (who made his MLB debut shortly before J.P.). Arencibia was named the Blue Jays' Minor League Player of the Year in 2008, leading the organization in hits (152), doubles (36) and RBI (105) in the minors. He batted .315/.344/.560 with 62 RBI in 59 games for the Dunedin Blue Jays and .282/.302/.496 in 67 contests for the New Hampshire Fisher Cats. Baseball America ranked him the second-best prospect in the Florida State League (between Rick Porcello and Logan Morrison) and #8 in the Eastern League (between Fernando Martinez and Daniel Bard). In 2009, J.P. had trouble reaching base in his AAA debut with the Las Vegas 51s but showed good pop - he hit .236/.284/.444 with 26 walks, 114 strikeouts, 32 doubles, 21 homers and 75 RBI. He led Pacific Coast League backstops in assists (59, tied with John Hester), errors (13) and passed balls (14). Baseball America did not rank him among the league's top 20 prospects, though three other catchers were picked - Buster Posey, Adam Moore and Angel Salome.

He began 2010 back with the 51s, where he hit .303/.360/.639 with 31 home runs, 32 doubles and 79 RBI in his first 95 games. He was leading the PCL in homers and among the top 10 in doubles, RBI and slugging. He was called up to Toronto to make his major league debut in August 2010. In his first game, August 7, he hit the first pitch he saw from Tampa Bay Rays starter James Shields for a home run in the 2nd inning, then added another long ball off Dale Thayer in the 6th and had two other hits, one of them a double, in one of the greatest major league debuts ever. He was only the 5th player in history to hit two homers in his first game, and the 107th to homer in his first at-bat; the combination of 4 hits and 2 homers was unprecedented (the 4 hits in his debut tied an American League record, as did his 3 extra-base hits). The Blue Jays hit 8 homers that day in a 17-11 win over the Rays. He was named MVP of the 2010 Pacific Coast League, the second straight Las Vegas player so honored (following Randy Ruiz). He did not do so well in his big league maiden voyage, hitting .143 overall in 11 games with no other extra-base hits.

After starting catcher John Buck left via free agency, Arencibia was handed the starting catching job for the Jays in 2011. He struggled with the bat in spring training, but his Opening Day performance against the Minnesota Twins on April 1 reminded everyone of his great major league debut: he hit a pair of homers, off Carl Pavano and Dusty Hughes, and added a two-run triple to drive in five runs as the Jays crushed the Twins, 13-3. He played 129 games, with only a .219 average, but compensated for the low batting average with good power, hitting 20 doubles and 23 homers, driving in 78 runs. His K/BB ratio of 133 to 36 was another cause for concern, as he finished with a dismal on-base percentage of .282. His 12 passed balls were second in the 2011 AL, less than half of leader Jarrod Saltalamacchia (who had the disadvantage of catching knuckleballer Tim Wakefield). He also tied Carlos Santana for 9th in the league in whiffs. He slugged .438, thanks to the homers, for an OPS+ of 90. His performance was good enough to land him on the 2011 Topps All-Star Rookie Team.

He had another doozie of an Opening Day in 2012, smacking a tie-breaking three-run homer off the Cleveland Indians' Jairo Asencio in the 16th inning to lift the Blue Jays to a 7-4 win on April 5th. Arencibia had gone 0 for 6 before the homer, which came in the longest Opening Day contest in major league history. He was hitting .242 with 16 homers and 50 RBI in 80 games when he suffered a fractured hand from a foul ball off the bat of the Oakland A's Brandon Inge on July 25th, putting him out of action for a number of weeks. He played 102 games for the Jays, hitting .233/.275/.435 with 16 doubles, 18 homers and 56 RBI in 347 at-bats. After the season, the Jays traded their top prospect, fellow catcher Travis d'Arnaud, to the New York Mets to reel in pitcher R.A. Dickey, indicating they were committing to Arencibia as their catcher for the long-term despite his struggles with OBP and strikeouts. He was 1 for 5 with 3 strikeouts as a backup to Joe Mauer for Team USA in the 2013 World Baseball Classic (Jonathan Lucroy also backed up at catcher). Arencibia got his lone hit, a single, off Samuel Deduno in a loss to the Dominican national team.

On Opening Day in 2013, facing the Indians on April 2nd, he found out catching Dickey was no day at the park. He was charged with three passed balls as he had trouble with the knuckleball, the first two of which led to the Indians' first run as they defeated the Jays, 4-1. Toronto decided to keep veteran Henry Blanco as a backup in large part because of his experience with the knuckler, and that first painful experience for J.P. seemed to indicate that Blanco would be in charge of handling the Jays' new ace going forward. On April 4th, he reminded folks why he was the Jays' starting catcher, hitting a pair of homers against the Indians to lead the team to a 10-8 win, its first of the season after two losses. He was having his usual season with the Jays, showing lots of home run power paired with a low batting average, when he lashed out at Blue Jays analysts Gregg Zaun and Dirk Hayhurst during an appearance on a local sports radio on July 4. The two former players had been critical of J.P.'s "all-or-nothing" approach at the plate, and Arencibia, who was on air to promote a youth charity event, attacked his critics by disrespecting their playing talent. He ended the season with a .194 batting average in 138 games, and while he did hit 18 doubles and 21 homers, it was not enough to compensate for his other shortcomings, as his OPS+ was a measly 59. His K/BB ratio of 148/18 was particularly abysmal, while his .227 OBP would have ranked last in the majors had he racked up enough at-bats to qualify. His mediocre defense was not helping him win favors either. He was 9th in the 2013 AL in strikeouts (between Mark Reynolds and Alejandro De Aza), led in errors at catcher (11) and passed balls (13). Still, it was a surprise when the Blue Jays announced December 2nd that they had not tendered him a contract offer, making him a free agent. On December 10th, he signed a one-year deal with the Texas Rangers.

He had a tremendous game for the Rangers against the New York Yankees on July 29, 2014, collecting 4 extra-base hits and 7 RBI, but it was all for naught as Texas lost, 12-11. The outburst included two doubles and two homers, one of them a 7th-inning grand slam, and the Rangers managed to score twice off Yankees closer David Robertson in the 9th but left the bases loaded to fall one run short. He had started the season with the Rangers but was sent to the minors in mid-May after hitting .133 in 20 games. He was recalled after the All-Star Game and his great game was just one in a hot streak that saw him hit 7 homers and drive in 22 runs in 19 games from July 18th to August 8th. On August 13th, he became the third Rangers position player that year to be used as a pitcher, following Mitch Moreland and Chris Gimenez, when he pitched a scoreless 9th inning in a 10-1 blowout loss to the Tampa Bay Rays. He was the 35th different pitcher to be used by the team, a club record, following the big league debut of Alex Claudio earlier in the game. He ended up hitting only .177 in 63 games, but with 9 doubles, 10 homers and 35 RBI.

On January 8, 2015, he signed a free agent contract with the Baltimore Orioles, but he was released just after the end of spring training without playing any games. He signed a contract with the Tampa Bay Rays a week later and ended up playing 24 games for them that season, hitting .310 with 6 homers and 17 RBI. His OPS+ was an outstanding 148, by far his best as a big leaguer (albeit in a smaller sample size). The bulk of his season was spent with the AAA Durham Bulls, and there he hit .227 with 22 homers and 65 RBI in 99 games. On December 14, 2015, Arencibia signed as a free agent with the Philadelphia Phillies, receiving an invitation to spring training where he would compete with Carlos Ruiz and Cameron Rupp for playing time. He was released that May in Triple A and completed his playing days with a stint back with the Durham Bulls.