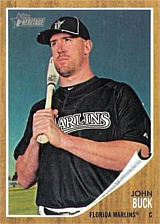 John Buck was a big league catcher in parts of eleven seasons. He was a member of the American League All-Star team in 2010.

A seventh round selection of the Houston Astros in 1998, Buck made his debut with the Kansas City Royals in 2004, one day after being one of many components in a three-team trade that landed Carlos Beltrán in Houston. He showed some pop in K.C., with several seasons of double-digit bombs including an 18-home run season in 2007, but never once batted above .250 for the team. He landed with the Toronto Blue Jays on a one-year deal before the 2010 season and broke out. In 118 games, Buck slashed .281/.314/.489 with 20 bombs (13 at the All-Star break, tops in the bigs) and 66 RBI, making his lone All-Star appearance count with a double off St. Louis Cardinals ace Adam Wainwright.

This earned John a lucrative three-year, $18 million deal from a team usually reticent in offering such deals, the Florida Marlins. Buck held the starter's job for two seasons, regressing to previous norms in 2011 (.227 average, 16 homers, 57 RBI in 140 games) before falling off a cliff in 2012 (.192, 12 homers, 41 RBI in 106 games). The Marlins, having tried spending money for roughly a season and not being immediately rewarded, tore it down. John ended up dealt twice that off-season. First, he headed with Jose Reyes, Mark Buehrle, Josh Johnson and Emilio Bonifacio back north to Toronto for a series of intriguing young players and Jeff Mathis. Then, he was a throw-in to the New York Mets when they shipped R.A. Dickey to the Jays, with Noah Syndergaard and Travis d'Arnaud the true prized acquisitions.

Buck started the 2013 season on fire, hitting 6 homers and collecting 19 RBI in his first 10 games. His 9 home runs in April tied the record for a catcher in that month, matching Johnny Bench (1971) and Charles Johnson (2001). He turned back into John Buck as the season progressed and headed to the Pittsburgh Pirates with Marlon Byrd at the end of August to free up the catching job for d'Arnaud. He saw his first, and only, postseason action that fall, catching an inning during the Bucs' NLDS tilt with the Cardinals. Buck split his final big league season, 2014, in limited action between the Seattle Mariners and Los Angeles Angels. He went to spring training with the Atlanta Braves in 2015 and had a chance of making the team as a back up, following the departure of Evan Gattis, but on March 25th, he announced his retirement, despite hitting over .300 with power in Grapefruit League games.