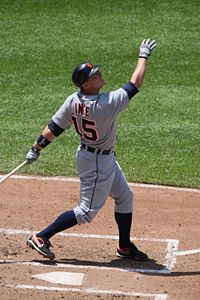 Brandon Inge started as an infielder, and was converted to catcher in the minor leagues. Inge's main calling card was his fielding, which often bordered on phenomenal. Because of his very strong throwing arm, Andy Etchebarren referred to Inge as perhaps the finest defensive catcher in the American League. However, while this allowed Inge to reach the majors, it affected his hitting very negatively. He was moved back to third base when the Detroit Tigers signed Ivan Rodriguez before the 2004 season and his play improved significantly after the move. He did however return to the backstop periodically after moving away from there, in order to find playing time when other positions were being occupied by other players.

Inge made headlines in 2008 when he went on the disabled list for pushing a pillow. He was trying to position the pillow beneath the head of his son, who slept in the same bed as Mr. and Mrs. Inge; in so doing, he re-popped a muscle.

Inge had a career year as the Tigers' third baseman in 2009, making the All-Star team while hitting 27 homers and driving in 84 runs. Less than two years later, the Tigers had him designated for assignment after a woeful first half to the 2011 season. He was hitting .177 with one homer in 70 games when the Tigers let him go on July 20th, on the day they acquired Wilson Betemit from the Kansas City Royals to play 3B. He accepted an assignment to the AAA Toledo Mud Hens, however, and exactly one month after his career almost ended, he was back in the first-place Tigers' line-up on August 20th, celebrating by hitting a homer off David Huff in his first at-bat, and hitting a 400-foot RBI double in his second as the Tigers cruised to a 10-1 win over the Cleveland Indians. He ended the year hitting .197 in 102 games, with 3 homers and 23 RBI. He did get to play in the postseason for the second time, going 3 for 7 with a double against the New York Yankees in the ALDS, then 4 for 15 with a homer as the Bengals bowed out to the Texas Rangers in the ALCS. He made the Tigers' club as a back-up infielder at the start of 2012, but only went 2 for 20 in 9 games before the Tigers handed him his unconditional release on April 26th, ending a 12-year association with the club. By doing so, the Tigers were swallowing $6 million left on his contract until the end of 2013.

Inge did not stay unemployed for long however, as the Oakland Athletics quickly jumped on the chance to grab him for the minimum salary while Detroit was picking up the rest of his paycheck. The A's had lost starting 3B Scott Sizemore for the season after a spring training injury and were disappointed by the production of the various players they had tried at the hot corner in April, as three players combined for a dismal .127 batting average for the month. Immediately inserted in the A's line-up as the starting 3B, he did not waste any time making his presence felt. On May 7th, he collected four RBIs in a game, then the next day hit a walk-off grand slam against the Toronto Blue Jays' Francisco Cordero to propel the A's to a 7-3 win. When he drove in four more against his old club on May 11th, it marked the 4th time in five games he had 4 or more RBI, the first major leaguer to pull that off since Lou Gehrig 81 years prior.

Prior to the 2013 season, Inge signed with the Pittsburgh Pirates as a minor league free agent.

Inge joined the staff of the University of Michigan as a volunteer assistant coach in 2021.