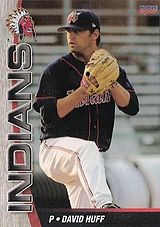 Pitcher David Huff was selected by the Cleveland Indians in the 2006 amateur draft and signed by scout Vince Sagisi. He made his pro debut that summer with the Mahoning Valley Scrappers, going 0-1 with a 5.87 ERA in 4 starts.

Huff was the 2008 winner of the Bob Feller Award. It is given each year to the top pitcher in the Indians minor league system. He made his major league debut on May 17, 2009, being roughed up in a start against the Tampa Bay Rays. He gave up 7 runs in 3⅔ innings and was saddled with a loss. He did manage to stay in the Indians' starting rotation for most of the year, however, ending with a record of 11-8, 5.61 in 23 games. He struck out 65 batters in 128⅓ innings, walking only 41.