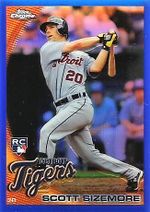 Scott Sizemore was signed by the Detroit Tigers and scout Bill Buck as a 5th round pick in the 2006 amateur draft. He began his professional career with an excellent season as the starting shortstop of the Oneonta Tigers, in the New York-Penn League, in 2006, batting .327 with 15 doubles, 49 runs and 37 RBI in 70 games and earning the circuit's All-Star nod at the position, according to Baseball America. In 2007, he moved up to the West Michigan Whitecaps in the Midwest League, hitting .265 with 33 doubles and 78 runs after moving to second base. His 2008 season with the Lakeland Flying Tigers of the Florida State League was curtailed to 53 games by a fractured wrist, although he continued to do well, hitting .286 with 32 runs and being named a mid-season All-Star.

In 2009, Sizemore reached AAA for the first time after beginning the year in AA with the Erie SeaWolves, where he hit .307 in 59 games. In mid-season, he was promoted to the Toledo Mud Hens in the International League and continued to hit well, to the tune of a .308 average in 71 games. He was named to the United States squad in the 2009 Futures Game, reflecting his new status as a top prospect. His steady progress and ability to master all minor league levels earned him the opportunity to start the 2010 season in Detroit, where he was the starter at second base for the first six weeks of the season. However, on May 15th, he was hitting only .206, with an on-base percentage below .300, and he was sent back to Toledo for more seasoning. He then came back for a week in July, returned to AA until the end of the International League playoffs, and ended the year back in Detroit in September. Overall, he hit .224/.296/.336 in 48 games in the American league, while in 76 games for the Mud Hens, he almost reproduced his previous season's batting line, with final numbers at .298/.378/.472.

Sizemore started the 2011 season back in Toledo, and was blazing hot, hitting .408 in 23 games. The Tigers called him up on May 3rd and once again put him in the starting line-up at second base, but like the previous year, he had trouble adapting to major league pitching. He was hitting .222 with no power after 17 games when on May 27th, he was traded to the Oakland Athletics in return for reliever David Purcey. After 9 games with the AAA Sacramento RiverCats, the A's brought him up and inserted him as their starting third baseman. He had only played 20 games at the position in the minors, but adapted quickly, and began to hit as well. He had already given some hints in his earlier stint with Detroit, when his OBP showed significant improvement over his first season. The rest of his game followed that trend with Oakland, as in 93 games, his batting line was a solid .249/.345/.433, with 21 doubles, 11 homers, 42 runs and 52 RBI. Given his history of hitting well at all minor league levels, the A's were expecting even better things from him in 2012, but in one of the first work-outs of spring training on February 25th, he injured his right knee. Tests performed two days later revealed a torn ligament, putting him out for the season and leaving his team with a gaping hole to be filled. He underwent surgery on March 21st but was not expected back until the beginning of spring training in 2013.