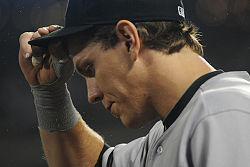 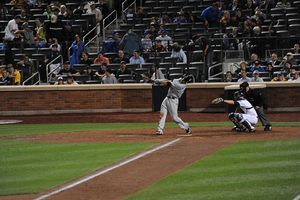 Logan Morrison made both his AAA and his major league debuts in 2010.

The Kansas City, MO native made big strides in 2007, hitting .267/.343/.483 for the Greensboro Grasshoppers with 24 homers and 86 RBI. He tied Stephen Chapman for fourth in the South Atlantic League in home runs behind Ryan Royster, Jonel Pacheco and Chris Carter.

In 2008, Morrison's batting line was .332/.402/.494 for the Jupiter Hammerheads with 38 doubles, 71 runs and 74 RBI. He led the Florida State League in average (.024 over Brian Dopirak), hits (162), OBP and doubles. He was second in total bases (241, 15 behind Juan Francisco) and fifth in slugging. He was named the FSL All-Star first baseman and MVP. Baseball America rated him as the league's third-best prospect after Rick Porcello and J.P. Arencibia. They also named him the Best Hitter for Average, Best Batting Prospect, Best Defensive First Baseman and possessing the Best Strike Zone Judgment in the Florida chain and as the best batting prospect and best strike zone judgment in the FSL. He led Marlins farmhands in average and hits and was .002 behind OBP leader Gaby Sanchez. He then batted .404 with 29 RBI in 25 games for the Mesa Solar Sox, tying for second in the Arizona Fall League in RBI and placing third in average. He was rated as the #19 prospect in all of baseball by Baseball America.

Morrison had a setback in 2009, falling to .277/.408/.439 in 82 games, 3 for Jupiter and 79 for the Jacksonville Suns. He had more walks (64) than whiffs (48). He led Marlins farmhands in OBP and was six walks behind leader Lee Mitchell despite missing 55 days with a right thumb sprain. He then batted .360 in the postseason with 9 runs in 7 games as Jacksonville won the Southern League. Baseball America ranked him as the #7 SL prospect behind Jason Heyward, Gordon Beckham, Desmond Jennings, Mike Stanton, Jarrod Parker and Tyler Flowers. 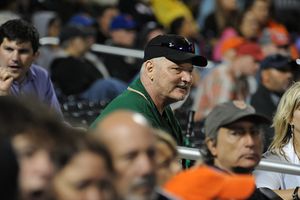 Logan began 2010 with Jacksonville and hit .381 in five games, getting promoted to the AAA New Orleans Zephyrs. After 44 games at New Orleans, he had hit .321/.416/.512 with 25 walks and 28 RBI. He was named to the US squad in the 2010 Futures Game. He played all game at first base, hitting 8th (the other US first baseman, Eric Hosmer, was used at DH). Morrison singled off Hector Noesi to lead off the second inning. In the fourth, he drew a walk from Julio Teheran. He led off the 6th with a fly out against Stolmy Pimentel. In the 7th, he drew a Philippe Valiquette walk. Shortly after the All-Star break, Marlins leftfielder Chris Coghlan was injured in a post-game victory celebration and Morrison was called up to the majors to take his place, even though he had played first base almost exclusively in the minor leagues. However, with fellow rookie Gaby Sanchez entrenched at first base at the major league level, Morrison had to do some on-the-job learning as he got his first taste of "the Show". He got a hit in four at-bats in his major league debut at San Francisco on July 27, 2010. He got into 62 games for the Marlins, hitting .283 with 20 doubles, 7 triples and 2 homers, playing exclusively in left field.

Morrison built on his promising showing as a rookie to earn a spot in the starting line-up for the Marlins in 2011. Playing left field again, he showed some of the power which had not come out the previous season. He also emerged as a leader among the young Marlins, speaking up about his teammates' lack of appreciation for the antics of star SS Hanley Ramirez, who displayed a distinct lack of effort on several occasions during the season. On August 14th, Morrison had hit 21 doubles and 17 homers, while driving in 60 runs in 95 games when the Marlins' top brass announced he was being sent down to the minor leagues to "work on things", in the words of General Manager Larry Beinfest, who cited his .249 batting average at the time as a cause for concern - a rather bizarre assertion when Morrison's OPS+ was an excellent 114 in what was his first full season in the majors. There were rumors that the demotion was related to an incident a few days earlier when Morrison had not shown up for an autograph session arranged by the team; he had consulted the team's union representative, Wes Helms, who told him the session was not mandatory. Given that the veteran Helms was released on the same day as Morrison was sent to New Orleans, there was speculation that this was not mere coincidence. Morrison's agent Fred Wray then approached the Major League Baseball Players Association to discuss filing a possible grievance. There was also speculation that the demotion was due to Morrison's usage of the website Twitter. He had been criticized by Marlins president David Samson for his tweets (some of which were R-rated) as well as indirectly by manager Jack McKeon (who complained of young players who were distracted and who "want to run their mouth instead of tending to business"). Morrison had over 60,000 followers on Twitter. He came back to Florida on August 24th and celebrated his return to the majors with a home run off the Cincinnati Reds' Homer Bailey. He finished the season with a batting line of .247/.330/.468 in 123 games, with 23 homers.

In 2012, Morrison switched from uniform number 20 to 5 to mark the team becoming the "Miami Marlins". The number 5 had been retired by Florida before their inaugural season in honor of team President Carl Barger, who had passed away at the 1992 Winter Meetings, but owner Jeffrey Loria decided to mark the change of name by allowing one of the team's best young players to wear the hallowed number. However, the season marked a step backward for Morrison, who played only 93 games and hit .230/.308/.399 in the difficult hitting environment that is Marlins Park. His season ended because of a knee operation in September and he only had 11 homers and 36 RBIs as the Marlins' first season in their new digs was very disappointing. Things continued to go poorly in 2013. He first missed the first two months of the year recovering from the previous year's surgery, then played only 85 games, hitting .242/.333/.375. His power numbers fell off some more, as he only hit 6 homers and drove in 36 runs. On December 11th, the Marlins decided to cut ties with Morrison, trading him to the Seattle Mariners in exchange for reliever Carter Capps.

Logan played 99 games in his first season for the Mariners in 2014, hitting .262 with 20 doubles, 11 homers and 38 RBIs. This was worth an OPS+ of 111 in the tough hitting conditions of Safeco Field. The Mariners were hoping to build on that basis in 2015, but both he and the team took a step back, as he hit only .225. He did play 146 games, a career high, while slugging 17 homers (but only 15 doubles) while driving in 54 runs. His OPS+ fell to 92. On November 5th, he was traded to the Tampa Bay Rays along with IF Brad Miller and P Danny Farquhar in return for Ps Nate Karns and C.J. Riefenhauser and OF Boog Powell.

Logan's first season with the Rays in 2016 was correct, with a .238 average, 14 homers and 43 RBIs in 107 games, good for an OPS+ of 101. In 2017, however, he finally showed the kind of power that had been predicted from him from the time he reached the majors, as he hit 38 dingers and drove in 85 runs while drawing 81 walks in 149 games. His slash line was an impressive .246/.353/.516 and his OPS+ an excellent 135. It seems like the Rays would have been eager to retain him now that he had finally broken through, but they did not pursue him after he became a free agent. In a slow market, no one else attempted to sign him until spring training had got under way in 2018. It was only on February 25th that the Minnesota Twins signed him for one year for the bargain price of $6.5 million, with bonuses and an option possibly increasing the value of the deal significantly. It was a season to forget, however. He started off very slowly, hitting just .145 in March/April. He also hit below the Mendoza Line in both June and August and his season ended early that last month due to a hip problem that required surgery. In total, he hit .186 with 15 homers and 39 RBIs in 95 games, a far cry from what he had done his previous season. The Twins also quickly fell out of contention. He split his time between first base, where he spelled Joe Mauer, and designated hitter.

Logan became a free agent again after the 2018 season, but was unable to find a team in time for spring training. It took until April 19, 2019 for him to sign, joining the New York Yankees on a minor league deal. The Yankees had suffered a rash of injuries, including to 1B Greg Bird, and needed reinforcements badly.