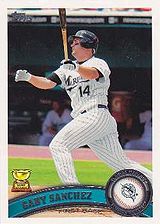 Gaby Sanchez was suspended for his junior year in college at the University of Miami and fell to the Florida Marlins in the 4th round of the 2005 amateur draft. He signed with scout John Martin for a $250,000 bonus, largely on the recommendation of scouting supervisor Mike Cadahia.

He reached the major leagues with the Marlins late in the 2008 season, hitting .375 in 5 games. He had another look late in 2009, playing 21 games and going 5 for 21 with his first two major league homers. In 2010, he won the Fish's starting job at first base and played 151 games. He was very productive, with a batting line of .273/.341/.448 with 37 doubles and 19 homers. That excellent all-around performance won him a spot as the first baseman on the 2010 Topps All-Star Rookie Team. He had another very solid season in 2011, playing another 159 games, with a line of .266/.352/.427. There was great similiraty between his rookie and sophomore seasons: 72 runs scored both years, but also 572 at-bats and 19 homers, and 35 doubles as opposed to 37 as a rookie. His walk total rose significantly, however, from 57 to 74, but his RBI dropped from 85 to 78. Profiting from the fact that Josh Johnson was injured and Hanley Ramirez had an off-season, he was chosen the Marlins' lone representative at the 2011 All-Star Game. His performance hid a poor second half, however, during which his average fell to .225.

In 2012, the team moved moved to a new ballpark in Gaby's hometown of Miami, FL and changed its name to become known as the Miami Marlins, but he had a rough start with a lot of attention now focused on the team. After 36 games, he was hitting only .197 with a single homer and 11 RBI. After the Marlins' game on May 19th, he was sent down to the AAA New Orleans Zephyrs to try to find back his swing. He hit .310 in 19 games for New Orleans before being called back on June 10th. However, he failed to improve much after his return, and on July 4th, the Marlins decided to acquire veteran Carlos Lee from the Houston Astros in return for two well-regarded prospects, 3B Matt Dominguez and P Rob Rasmussen. Gaby hit his third homer of the season that day, bringing his average to .202, but was still sent back to AAA to make room for Lee. On July 31st, the Marlins decided to trade him to the Pittsburgh Pirates, along with minor leaguer Kyle Kaminska, in return for OF Gorkys Hernandez and a 2012 first-round pick.