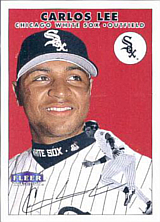 A steady player, Carlos Lee was a major star whose home run total never dropped from 1999-2006. As a rookie he hit 16, then he hit 24 for a couple of seasons, then 26, then 31 a couple of times, then 32, and in 2006 he hit 37 home runs. In 2007 he played for his fourth team, the Houston Astros, and while his home run count went down slightly to 32, he had more doubles and RBI than ever before. He dropped again to 28 homers in 2008, but since he appeared in only 115 games his slugging percentage was the highest in his career.

In his second season, in 2000, the White Sox won a division title and Lee contributed with a .301 average and 24 home runs. Lee hit only .091 in the ALDS however, as the Sox made an early exit. At the time, the White Sox drew much attention because of their substantial number of young players who all seemed promising: Lee, Paul Konerko, Magglio Ordonez, Mark L. Johnson, Chris Singleton, Jon Garland, Jim Parque, Keith Foulke - all regulars and all 27-years-old or younger. But that was the last division championship for most of those players, as they were largely traded away before the White Sox won again in 2005.

After the 2004 season, he was traded to the Milwaukee Brewers in return for Scott Podsednik, who became a key part of the White Sox World Series-winning team. Lee, for his part, played well for Milwaukee in 2005, becoming a "franchise player" for the first time by hitting 32 home runs with 41 doubles for the team. He also played in the All-Star Game for the first time, winning the Silver Slugger Award for his hitting prowess.

In late July, 2006, Lee was traded to the Texas Rangers, as it became clear to the Brewers that Lee was not likely to sign a new contract with them. For Lee, it was a chance to be on a division winner, since the Rangers were close to the division lead, while the Brewers were not. The Rangers faded down the stretch in spite of Lee's .320 average in 59 games for his new team. Overall, he set career highs with 37 home runs and 116 RBI between the two clubs.

In 2007, Lee signed a hefty long-term deal with the Houston Astros. He had a very solid first season, hitting 43 doubles, 32 homers and driving in 119 runs while returning to the All-Star Game. He also had excellent rate stats in 2008, when injuries limited him to 115 games. He hit 27 doubles and 28 homers while driving in 100 runs and batting .314, a career-best. Lee was only 1 for 7 for Panama in the 2009 World Baseball Classic, despite being counted on to lead the offense. His lone hit was a single off Tony Pena. In 2009, he put up a third straight season of batting .300 or more, hitting that number exactly, with 35 doubles, 26 homers and 102 RBI in 160 games. On August 18th, Lee became only the 10th player in history to hit 20 home runs every year of a decade, joining Alex Rodriguez as the only players to do it in the 2000s.

Carlos Lee continued to be one of the Astros' most productive hitters after that season, although no longer part of the National League's elite. In 2010, Lee became the first player in history to hit three extra-inning grand slams in his career. That year, his production fell to .246, with 29 homers, 24 doubles and 89 RBI. His OPS+ dipped to 91, a dangerous position for a player with little defensive value and getting on in years. He bounced back somewhat in 2011, hitting .275 with 38 doubles, 18 homers and 94 RBI. Lee's grand slam feats continued that year: his 16th career slam came off P.J. Walters - the only prior time he had faced Walters, he also hit a grand slam. No major leaguer had done that, according to the Elias Sports Bureau, at least as far back as 1950. That season, he played almost half of his games as a first baseman, moving from his familiar left field, and in 2012 was a full-time first baseman. He played 66 games for Houston that season, with a decent .287 average and 15 doubles, but only 5 homers. There was tension with manager Brad Mills and trade rumors began to circulate in mid-June. On July 4th, he was sent to the Miami Marlins in return for two prospects, 3B Matt Dominguez and P Rob Rasmussen. He hit .243 with 4 homers and 48 RBI in 81 games for Miami, then became a free agent after the season. He was hoping for a team to offer his a two-year contract, but none were interested. On June 20, 2013, he officially announced his retirement, the announcement coinciding with his 37th birthday.

Despite his large numbers, Lee was never a league leader in any major category, and never finished higher than seventeenth in the MVP voting. The large numbers were partly due to playing every day, although high slugging percentages from 2006 to 2008 put his career slugging percentage over .500 for a time; he later fell back below that line, ending his career at a still very strong .493, to go along with his 358 homers and 1363 RBI.

In terms of similarity scores, the most similar player is Orlando Cepeda, a Hall of Famer who accumulated his statistics in a much tougher offensive context. There is only one other Hall of Famer in his top 10, Jim Rice at number 10, the list being dominated by contemporaries who were strong hitters but not quite of Hall of Fame caliber such as Andres Galarraga, Ruben Sierra, Moises Alou and Aramis Ramirez. He first became eligible for the Hall of Fame in its 2018 ballot, although he stood little chance of even making it to a second year given the strength of the competition he was up against. Indeed, he received just one vote and dropped off the ballot.