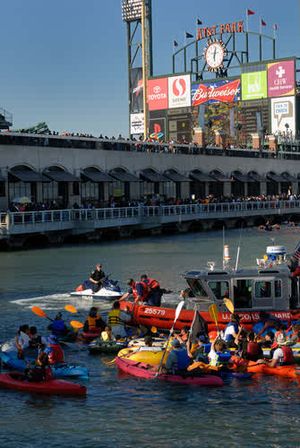 The 2007 All-Star Game was played on Tuesday, July 10, 2007 at AT&T Park in San Francisco, CA. The American League won the seventy-eighth midsummer classic by a score of 5 to 4. The game was played in front of 43,965 fans. The unanimous MVP was Ichiro Suzuki of the Seattle Mariners. Going into the game, the National League had not won the Midsummer Classic in the last eleven meetings. It was the second-longest winning run in All-Star history, second to the NL's streak from 1972-1982.

Ichiro Suzuki hit the first inside-the-park home run in All-Star Game history. The NL almost won for the second straight year - they scored two runs on an Alfonso Soriano homer against J.J. Putz and loaded the bases on three walks in the 9th, but failed to score the tying run when Aaron Rowand was retired by Francisco Rodriguez.

Suzuki was the clear star of the show, going 3 for 3 with the homer, one run and two RBI. Victor Martinez cracked a two-run homer for the AL in his lone at-bat, while Josh Beckett worked two scoreless innings. For the NL, only Takashi Saitoh and Brad Penny did not allow a hit in their inning of work. SS Jose Reyes led the offense, going 3 for 4 with a double, a steal and a run as it was a great day for leadoff hitters.

Veteran LF Barry Bonds went 0 for 2 in front of the home fans. No balls were hit into the bay, though quite a few souvenir seekers were in boats waiting for them. Chris Young, Billy Wagner and Putz were the three hurlers who allowed over a run per inning in the game.