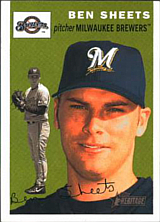 The distant cousin of Andy Sheets, Ben Sheets won an Olympic gold medal for the United States in the 2000 Sydney Olympics.

In 2008, Sheets became the all-time Milwaukee Brewers strikeout leader, surpassing Teddy Higuera. He held the mark until 2014, when he was passed by Yovani Gallardo. He spent 8 seasons with the Brewers, from his major league debut in 2001 until the end of 2008, winning in double figures 7 of the 8 years. The Brewers had expected him to become a big winner, but that never happened, as his career high for victories was 13, set in his last season; apart from that, he was always between 10 and 12 wins, except for 2006, when an injury limited him to 17 starts and he finished 6-7 with a 3.82 ERA. He had some very solid seasons and was a four-time All-Star, pitching over 200 innings in a season three times, leading the National League in shutouts in 2008, and posting an ERA of 2.70 in 2004 and 3.09 in his last season. He never pitched in the postseason. On May 15, 2004, he struck out 18 batters in a game in a win over the Atlanta Braves. He then pitched an immaculate inning on June 13th, becoming the second pitcher in Brewers history to do so. He finished that season with a K/W ratio of 264/32, which is one of the 10 best since 1900.

He became a free agent after the 2008 season, but missed all of 2009 because of an elbow injury that forced him to undergo Tommy John surgery. The Oakland Athletics signed him for 2010, but once again, his season was cut short by arm woes, ending up at 4-9, 4.53 in 20 starts. He missed all of 2011 as an unsigned free agent, before hooking up with the Atlanta Braves for the 2012 season. After a couple of rehabilitation starts in the minors, he made a successful return to the majors on July 15th, pitching 6 scoreless innings in a 6-1 win over the New York Mets. He won his next two starts as well, his comeback coming at a key time for the Braves, who were on the trade market for a starter before Sheets' unexpected resurgence. He had a rare failure in a span of four pitches during the 2nd inning of the annual Civil Rights Game on August 18th, when he gave up consecutive solo homers to Hanley Ramirez, James Loney and Luis Cruz of the Los Angeles Dodgers. The only other hit he allowed in 6 innings that day was another long ball, a three-run shot by Ramirez in the 6th, but he was charged with the 6-2 loss to move his record to 4-3. He lost his next start, failing to make it out of the 5th inning, then was out for an extended period, only coming back on the final day of the season to start a meaningless game against the Pittsburgh Pirates; he pitched one inning and struck out two, then gave way to Luis Avilan in the 2nd as the Braves used 8 different pitchers to shut out the Bucs in preparing for the postseason. It turned out to be his last major league appearance and he ended the year at 4-4, 3.47 in 9 starts.