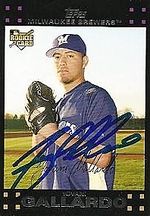 Pitcher Yovani Gallardo made his major league debut in June of 2007 with the Milwaukee Brewers. His repertoire includes a fastball in the low 90s, curveball and slider.

Born in Mexico, Gallardo grew up in Fort Worth, TX and was 5-4 with a 1.38 ERA as a high school senior, but his most impressive numbers were likely 134 strikeouts to 10 walks in 61 IP. Scouted by Jim Stevenson, the Brewers selected him in the second round of the 2004 amateur draft, the 46th overall selection, and signed him for $725,000.

Yovani debuted professionally with the AZL Brewers and was amazing, allowing only three runs (one earned) in 19 1/3 IP, striking out 23. He had no decisions in six starts, as he presumably was on a pitch count given the IP/start. Promoted to the Beloit Snappers, he struggled, allowing 12 hits and 10 runs in 7 1/3 IP and losing his first pro decision. Baseball America rated him as the #13 prospect in the Arizona League. The next year, Gallardo was 8-3 with a 2.74 ERA and one save for the West Virginia Power. He was 5th in the South Atlantic League in ERA but not ranked among the SAL's top 20 prospects by Baseball America, which chose 9 other pitchers.

Gallardo broke out in 2006, going 6-3 with a 2.09 ERA for the Brevard County Manatees (.196 opponent average, 103 K and 23 BB in 77 2/3 IP) and 5-2, 1.63 for the Huntsville Stars (.187 average, 85 K:28 BB in 77 1/3 IP). He led Brewers farmhands in ERA (1.86), strikeouts (188) and lowest opponent average (.192) in being named their Minor League Player of the Year. The 188 strikeouts set a record for Brewers minor leaguers. In the 2006 Futures Game, he pitched a scoreless 6th inning for the World, walking one and allowing one hit. Baseball America rated him as the #2 prospect in the Florida State League after Homer Bailey and #2 in the Southern League - also after Bailey. At both stops, Scott Elbert was ranked third. Gallardo was second in the affiliated minors in ERA, trailing only Scott Lewis and .02 ahead of Kevin Slowey and Chase Wright. He was first in strikeouts, three ahead of Francisco Cruceta and second in strikeouts/9 (10.92, behind only Jacob McGee). Entering 2007, Baseball America rated him as the top Milwaukee prospect.

Gallardo began 2007 with the Nashville Sounds, going 8-3 with a 2.90 ERA, 110 strikeouts in 77 2/3 IP and a .189 opponent average in his AAA debut. He was leading the minor leagues in strikeouts once more as of June 14. When Chris Capuano went on the disabled list that day, Milwaukee called up Gallardo. He had gone 27-12 with a 2.48 ERA and 439 strikeouts in the minor leagues. In his major league debut, Gallardo beat the Giants, allowing 3 runs in 6 1/3 IP but only 4 hits. He walked 3, though, and allowed a homer. In his first at-bat, he doubled against Noah Lowry to score Rickie Weeks. He ended that first season in the Show with a record of 9-5, 3.67 in 20 games. He then missed most of 2008 with a knee injury suffered on May 1, being limited to 4 starts with no decisions. He was helathy in time for the Brewers' first postseason appearance since 1982 and started Game 1 of the NLDS against the Philadelphia Phillies. He was charged with the loss after giving upm three unearned runs.

Gallardo was a mainstay of the Brewers' starting rotation in 2009 and became the first pitcher to hit a home run against Randy Johnson, doing so early in the year. On April 29, he became only the third pitcher in major-league history to win a game 1-0 while recording at least 10 strikeouts and hitting a home run. The other pitchers to do that were Hall of Famers: the Yankees' Red Ruffing, on August 13, 1932 in Washington (12 strikeouts) and the Chicago White Sox's Early Wynn, on May 1, 1959 against the Red Sox (14 strikeouts). He started 30 games on the year, putting up a 13-12 record with a 3.73 ERA and 204 strikeouts in 185 ⅔ innings. His 7.27 hits per 9 innings were third in the 2009 NL behind Clayton Kershaw and Tim Lincecum and only Lincecum had a batter K/9 ratio. He was 5th in the NL in strikeouts but also second in walks (94, behind Doug Davis.

In 2011, Gallardo hit his 9th major league home run in his 177th at-bat - the last time a pitcher had gotten to nine that fast was Don Drysdale, who hit his 9th in his 144th career at-bat, back in 1958. He 1went 17-10, 3.52 as the Brewers won the NL Central title that year, pitching 207 1/3 innings and racking up 207 strikeouts as the team's undisputed ace. He started and won Game 1 of the NLDS against the Arizona Diamondbacks on October 1st, 4-1, pitching 8 innings, then gave up 1 run in 6 innings in the decisive Game 5 on October 7th, getting a no-decision in a game won by the Brewers, 30-2, in 10 innings. He made only one start in the NLCS, losing 4-3 to the St. Louis Cardinals in Game 3 on October 12th. He would have started the decisive game again, but the Brewers lost Game 6 and the Cardinals went to the World Series. In 2012, he had another excellent year, finishing at 16-9 with a 3.66 ERA. He pitched 204 innings and struck out 204 batters, while his 33 starts were tied for the National League lead. However, the reste of the Brewers' staff did not perform at the level of the previous season, and the team was out of the postseason.

2013 began on a wrong note for Gallardo, as he was pulled over by the Milwaukee police at 2:10 am on April 16th because he was driving erratically. He charged with drunk driving after a blood test revealed an alcohol level above the legal limit. Seemingly unaffected, he came back two days later with a vintage performance, defeating the San Francisco Giants, 7-2, while hitting the 11th homer of his career against Matt Cain to earn his first win of the year. At that point, both he and the Brewers were on a roll. He won his next start on April 23rd, 6-3 over the San Diego Padres, to give Milwaukee its 9th consecutive victory, then won again on April 29th, hitting his second homer in three starts in beating the Pittsburgh Pirates, 10-4. Unfortunately for him, he began to struggle after that and seemed to have lost some velocity on his fastball, making him more vulnerable to opposite hitters. He was 8-9 , 4.88, when he was forced to leave a start against the Chicago Cubs on July 30th with a hamstring injury; what made it particularly frustrating was that he was a strike away from having completed 5 innings with a 2-0 lead when the injury occurred, although he did have the bases located. John Axford relieved him, but allowed the Cubs to score 5 runs before the inning ended, although the Brewers came back to win the game, 6-5. There had been speculation before that start that Gallardo could be traded to a contender for the right price with the trading deadline just 24 hours away, but the injury meant that he would need to stay put at least until healthy again. He finished the season at 12-10, 4.18, with 31 starts, 180 1/3 innings pitched and 144 strikeouts.

Gallardo was named the Brewers' opening day starter in 2014, the fifth consecutive time that the prestigious assignment had been given him. While the Brewers started the year red hot, Gallardo had trouble coming up with wins in the first two months, as his record was only 2-3 after 10 starts, in spite of a 3.51 ERA. On May 27th, however, it was his bat that came in handy. In the bottom of the 10th inning of a game against the Baltimore Orioles, O's pitcher T.J. McFarland intentionally walked Mark Reynolds with two outs and the bases empty, knowing that P Francisco Rodriguez was due up next and that the Brewers had already used all of their position players. However, manager Ron Roenicke called on Gallardo as a pinch-hitter and he came through big time, hitting a double off the centerfield wall at Miller Park to score Reynolds and give the Brewers a 7-6 win. On September 8th, he became the Brewers' career leader for strikeouts when he passed Ben Sheets by recording his 1,207th career K. He finished the year with a record of 8-11, 3.51, pitching 192 1/3 innings during which he struck out 146 batters. The lack of wins obscured the fact that his ERA+ was a solid 108.

On January 19, 2015, he was traded to the Texas Rangers in return for IF Luis Sardinas and Ps Corey Knebel and Marcos Diplan. Because of an injury to Yu Darvish, he was named the Rangers' opening day starter against the Oakland Athletics on April 6th. It didn't go so well, as he gave up four runs in as many innings and was charged with a loss, but he came back to win his next start on April 11th, 6-2 over the Houston Astros. After a rough start, he settled into a groove in June and late in the month and in early July, put together a streak of 33 1/3 scoreless innings. In 33 starts, he went 13-11, 3.42, logging 184 1/3 innings and striking out 121 batters. He started and won Game 1 of the ALDS against the Toronto Blue Jays on October 8th, giving up 2 runs in 5 innings. However, manager Jeff Banister went with Cole Hamels in the decisive Game 5 and the Rangers were eliminated.

Gallardo became a free agent after the 2015 season, but it took a while for him to find a team willing to give up a top draft choice to sign him. Spring training had already started on February 20, 2016 when he inked a three-year deal with the Baltimore Orioles worth $35 million. However, the signing ran into a snag when Yovani's physical exam revealed an anomaly, requiring more tests and putting the proposed deal in limbo. On February 25th, the two sides agreed to a restructured deal, now reduced to two years and $22 million. He made 23 starts for Baltimore, going 6-8, 5.42 and pitching 118 innings. He had a bloated 5.82 ERA in the first half, but pitched somewhat better after the All-Star Game, with a 5.18 ERA. On January 6, 2017, he was traded to the Seattle Mariners in return for OF/DH Seth Smith. He had another rough season with Seattle, as he ended up at 5-10, 5.72 in 28 starts while issuing 60 walks in 130 2/3 innings. Coming off two poor seasons, he could not be picky when it came to finding a team for 2018 and he settled on reuniting with the Brewers, signing a one-year, non-guaranteed contract for $2 million. The Brewers were willing to give him a look as a starter in spring training, but by mid-March, they had already announced that he had not impressed enough to earn a spot in the rotation. His making the team as a reliever was not a foregone conclusion either and indeed he was handed his release a few days before opening day. On March 31st, he was signed by the Cincinnati Reds, who immediately placed him on their 25-man roster and planned to use him as a reliever initially.