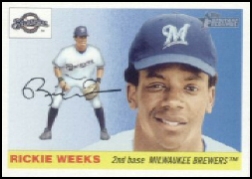 Rickie Weeks was drafted by the Milwaukee Brewers in the 1st round of the 2003 amateur draft. He was signed by scout Ray Montgomery and made his pro debut that summer.

When Dustin Pedroia was injured in the finale of the 2002 Haarlem Baseball Week, 2B Eric Patterson moved to shortstop for team USA and Weeks moved from the outfield to second base. His performance later in the summer helped scouts realize he could handle 2B full-time. He hit .370/.433/.556 for the club in the 2002 World University Championship and was error-free at second base. Davide Dallospedale made the All-Tournament team instead.

Weeks has a similar batting stance to All-Star outfielder Gary Sheffield. Weeks shakes his bat back and forth pretty fast, but not quite as violently as Sheffield. Weeks had a good bat but needed some work on his fielding. He was considered one of the top young players in baseball when he came up, but never quite lived up to expectations.

In 2017, he made the Tampa Bay Rays' opening day roster as a back-up, with his principal task being to platoon with the left-handed Logan Morrison at first base. It was a new position for him, and on April 12th, his inexperienced led to a violent collision with Brett Gardner of the New York Yankees. Gardner had hit a comebacker to the mound and was running to first base at full speed when Weeks couldn't corral an errant throw from P Xavier Cedeno. He then stepped into the baseline in trying to recover the ball, but in doing so went straight in Gardner's path. Both players fell to the ground and had to be removed from the game after the play.

Rickie's brother, Jemile Weeks, was also a first-round pick, by the Oakland Athletics in the 2008 amateur draft.