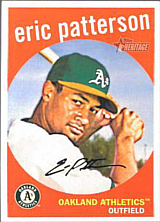 The younger brother of Corey Patterson, second baseman Eric Patterson was selected by the Chicago Cubs in the eighth round of the 2004 amateur draft and debuted in the majors three years later. Patterson's father, Don, played in the NFL as a defensive back for two years (1979-1980).

Out of high school, Eric was picked by the Colorado Rockies in the 23rd round of the 2001 amateur draft, but opted for college instead. As a freshman at Georgia Tech, Patterson hit .346 and slugged .458 while swiping 41 bases. He scored 73 runs, 20 fewer than conference leader Khalil Greene. He was 9th in NCAA Division I in stolen bases and 2nd in the Atlantic Coast Conference. He made the All-ACC team as a freshman and Baseball America named him to their freshman All-American first team. Patterson joined the US College national team that summer as the starting second baseman. He hit .333, second on the team to Michael Aubrey and ahead of Rickie Weeks, Carlos Quentin, Aaron Hill, Conor Jackson and Dustin Pedroia, among others. Eric was one of only three freshman position players on the team, stealing 17 bases that summer, more than all of his teammates combined.

In the 2002 Haarlem Baseball Week, Patterson went 9 for 19 with two walks and three runs to help the USA to its third title ever. Eric almost had the best average on the tourney and led Team USA. When Pedroia was injured in the finale, Patterson moved to shortstop and Rickie Weeks moved to second base from the outfield. While Patterson failed to establish himself as a top prospect at shortstop, it helped convince scouts that Weeks could handle second. Patterson hit .286/.429/.357 in the 2002 World University Championship, making three errors. He also stole 3 bases, tying Takashi Toritani for second behind Lingfeng Sun.

In 2003, Eric hit .274 and slugged .375. He scored 56 runs, second on Georgia Tech to Matt Murton, and was next-to-last among the starters in batting average, trailing 1B Micah Owings, who would make the majors as a pitcher. Patterson stole 35 bases in 41 tries, tying him for 9th in NCAA Division I. In the 2003 Pan American Games, Patterson scored six runs, tying for the most, as the US won Silver.

As a junior, Patterson helped Georgia Tech to a 10th-place finish nationally. He hit .326 and slugged .508; his 9 home runs trailed only Owings. He led the ACC easily with 48 steals (in 55 tries) and also led with 76 runs. Patterson made the All-Conference team at second base, tied Matt Macri for 9th in NCAA Division I in runs and was third in stolen bases. Baseball America named him as a third-team All-American at second base. The Chicago Cubs, who were employing Eric's brother Corey as their center fielder, took him in the 8th round of the 2004 amateur draft. He was signed by scout Sam Hughes and made his pro debut the next summer.

While Corey struggled in 2005, Eric exploded and was named the MVP of the Peoria Chiefs as well as the Cubs Minor League Position Player of the Year. The younger Patterson batted .333/.405/.535 with 11 triples, 90 runs and 40 steals in 51 attempts. His .982 fielding percentage was the best of any second baseman in the Midwest League and he led the league in average, 9 points ahead of the runner-up. He failed to lead in triples (2 off of the lead), runs scored (4 behind Agustin Murillo) or steals (17 behind). Not known for his power in college, he was second to Cesar Nicolas in slugging percentage in the MWL. Cubs farm director Oneri Fleita said "Every part of his game has been great." Baseball America ranked him as the #17 prospect in the MWL, between Sean Gallagher and Reid Brignac. Patterson made the Midwest League All-Star team at second base.

In his second year as a professional player, Patterson started at AA and hit .263/.330/.408 in 121 games for the West Tenn Diamond Jaxx with 9 triples and 38 steals in 50 tries. He also spent 17 games in AAA with the Iowa Cubs, where his batting line was .358/.395/.493 with 8 steals in 8 tries and 14 runs. Patterson led Chicago farmhands in runs (95) and tied for the lead in triples (11). He tied Callix Crabbe for the most putouts (237) in the Southern League. Baseball America rated him the #17 prospect in his league once more, between Mitch Talbot and Juan Salas. Patterson also played in the 2006 Futures Game, going 0 for 1 as Howie Kendrick's backup on the USA squad. Patterson spent the fall with the Mesa Solar Sox and hit .345/~.411/.460 with 15 stolen bases in the team's 31 games. He was 7th in the Arizona Fall League in average, right ahead of Trevor Crowe and Troy Tulowitzki and was ranked the league's 20th-best prospect by Baseball America. Eric led the AFL in steals and was second in runs; his 27 were two shy of Ben Zobrist's 29.

Patterson was having a solid year for Iowa in 2007 when Chicago called him up in August as Alfonso Soriano went on the Disabled List. Eric entered his first game in the 9th inning on August 6th as a backup left fielder against the Houston Astros, after starter (and college teammate) Matt Murton had left. He got his first plate appearance an inning later, against Brad Lidge, and successfully bunted Jason Kendall to second. He started and hit 8th the next day, singling against Woody Williams in his first MLB at-bat. He was 1 for 6 in five games when he was sent back down to make room for Jake Fox. In 128 games for the Iowa Cubs, he hit .297/.362/.455 with 24 steals in 33 tries as well as 14 home runs and 94 runs. Patterson made the Pacific Coast League All-Star team at second base.

Patterson played a few games with the Cubs during interleague play in 2008. He was dealt to the Oakland Athletics in July of that year along with Matt Murton, Sean Gallagher and prospect Josh Donaldson in exchange for Rich Harden and Chad Gaudin. He played a career high 90 games in 2010, split between Oakland and the Boston Red Sox, and saw his last big league time with the San Diego Padres in 2011.

Patterson spent 2012 and part of 2013 playing in the minor leagues systems for the Detroit Tigers and Milwaukee Brewers respectively. He played part of the latter season with the York Revolution of the independent Atlantic League. In 2014-2015 Patterson again played with the Revolution to close out his playing career. Patterson broke the Atlantic League season record with 17 triples in 2014, breaking the mark shared of 13 by Wayne Lydon and Lloyd Turner.

After a short time away from the game, Patterson got back into baseball as a volunteer assistant coach for the Georgia Tech Yellow Jackets during the 2018 season. A year later he served as the head coach for the Gwinnett Tides of the summer collegiate Sunbelt Baseball League. Patterson followed that up by joining the Former Player Internship Program, a six-month initiative designed to provide former major and minor league players from diverse backgrounds the tools to help them transition from the playing field to jobs in front offices and on coaching staffs. Patterson spent his six-month internship with the Cubs in 2020. The internship led to his next job of assistant hitting coach for the South Bend Cubs in 2021.