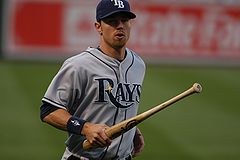 Infielder Ben Zobrist was selected by the Houston Astros in the sixth round of the 2004 amateur draft. He was signed by scout Rusty Pendergrass for $55,000 and began his pro career in the New York-Penn League that summer, leading the circuit with a .339 average. He hit .333/.500/.500 for the USA in the 2005 Baseball World Cup. On July 12, 2006, he and pitcher Mitch Talbot were traded to the Tampa Bay Devil Rays for Aubrey Huff. Zobrist made his big league debut the following month.

He was the shortstop on the only 2-6-2 triple play in major league history. It came in the 1st inning of a September 2, 2006 game against the Seattle Mariners with runners on first and third. Raul Ibanez struck out (Out #1); Adrian Beltre tried to steal second, but was tagged by Zobrist (Out #2); and Jose Lopez tried to steal home, but was tagged by catcher Dioner Navarro (Out #3).

He was the starting shortstop for the Devil Rays at the beginning of the 2007 season, but hit only .155 in 31 games and quickly lost the job.

Zobrist is the ultimate utility man; in 2010, Zobrist played 5 positions and batted in 8 different slots in the order. On August 13, 2013, he hit a lead-off homer - the 100th home run of his career - off Erasmo Ramirez of the Seattle Mariners and added a two-run blast off Ramirez in the 5th inning. What made the occasion memorable was that the Mariners' lead-off hitter, Brad Miller, did the same thing. It was only the second time in major league history that both teams' lead-off hitters had homered to start the game and added another homer later in the contest. On June 5, 1994, Tony Phillips, for the Detroit Tigers, and Chuck Knoblauch, for the Minnesota Twins, had been the first to do so. Unfortunately, the Rays lost the game, 5-4, in spite of Zobrist's contribution.

On January 10, 2015 Zobrist and Yunel Escobar were traded to the Oakland A's for John Jaso, minor league shortstop Daniel Robertson and minor league outfielder Boog Powell. After only half a season with the A's, during which he hit .268 in 67 games, he was traded again, on July 28th, to the Kansas City Royals in return for prospects Aaron Brooks and Sean Manaea. He took over for Omar Infante as the Royals' second baseman and hit .284 in 59 games, to finish the year at .276 in 126 games. He added 36 doubles and 13 homers, scored 76 runs and drove in 56. He started all of the games the Royals played in that year's postseason, playing second base and hitting second behind Alcides Escobar, and was a key factor in the Royals capturing their first World Series crown since 1985. He hit .333 in the Division Series, .320 with a pair of homers in the ALCS, and .261 with 5 runs scored and 4 doubles in the World Series as Kansas City defeated the New York Mets in five games. He hit 8 doubles overall in the postseason and scored 15 runs in 16 games. He was a much sought-after free agent after the season and on December 8th signed a four-year deal with the Chicago Cubs for $56 million. The Cubs immediately traded Starlin Castro after the signing, opening up the starting job at second base for him.

He had a great first season with the Cubs in 2016, playing both second base and the two outfield corners, and hitting .272 with 18 homers and 76 RBIs in 147 games; he also scored 94 runs. He made a contribution on both sides of the ball and gave manager Joe Maddon added flexibility in juggling his line-ups, one of his trademarks, as Chicago put up the best record in the National League. He was named to the All-Star team for the third time and then was the MVP of the 2016 World Series in which the Cubs defeated the Cleveland Indians in seven games to end their century-long title drought. During the Series, he went 10 for 28 (.357) with 2 double and a triple, scored 5 runs and drove in 2. His production fell markedly in 2017, as reflected by his OPS+ that went from 112 to 79. He hit just .232 with 12 homers and 50 RBIs, but the Cubs repeated as division champions. Again, he saw significant time at three positions, and while he was relatively productive in the Cubs' Division Series win over the Washington Nationals, when he hit .235 with a pair of doubles and scored 3 runs, he was completely shut down by the Los Angeles Dodgers in the NLCS, going 0 for 9 and being benched in one of the games, the first time he had not been used in a postseason game since the 2008 World Series. He bounced back in 2018 however, as he hit .305 in 139 games - his highest ever batting average at the age of 37 - with 9 homers and 58 RBIs. His OPS+ was back in his normal excellent range, at 116. This time, he saw more action in the outfield than at second base, but again was shuffled among three positions as Maddon used his positional flexibility to rest other regulars. It was a frustrating season for the Cubs, though, as one more win in the regular season would have given them the best record in the National League and home field advantage in the postseason. Instead, they had to play a one-game playoff against the Milwaukee Brewers to determine the division winner. They lost that game in spite of its being played at Wrigley Field, then lost again, this time in extra innings and again at home, to the Colorado Rockies in the Wild Card Game. Ben went 1 for 6 in the game as what could have been another successful season turned into an early exit.

On May 8, 2019, Zobrist was placed on the restricted list as he took an extended leave of absence in order to deal with marital problems - i.e an impending divorce. He was hitting .241 in 26 games, with only one extra-base hit. This came at a time the Cubs were short of infielders, but he had to deal with the complicated situation, and with his contract due to expire at the end of the season, it was possible that his time as a Cubs player was over. The team used part of the money saved by not having to pay him to sign free agent closer Craig Kimbrel in early June. He belied those who thought he would not return to the Cubs when he was reactivated on August 31st in order to join the team for the final month of the season.

Zobrist, a Dallas Baptist University alum, is the brother-in-law of DBU coach Dan Heefner. Their wives are sisters.