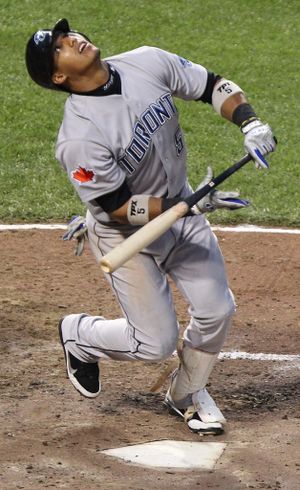 Infielder Yunel Escobar debuted in the majors in 2007. He hit .271/~.380/.358 in four seasons in the Cuban Serie Nacional. He never played for the famed Cuban national team.

He fled his homeland of Cuba to seek out big money in American baseball and was drafted in the second round of the 2005 amateur draft by the Atlanta Braves. He was signed by scout Gregg Kilby and made his pro debut that summer. After a brief stint with the Danville Braves (.400/.472/.733 in 8 games), he was promoted to the Rome Braves, where he hit .313/.358/.470. Baseball America rated him the #9 prospect in the South Atlantic League. In 2006, Escobar played in the 2006 Futures Game and hit .264/.361/.346 for the Mississippi Braves, facing more age-appropriate competition than he had his first year.

After beginning 2007 with the Richmond Braves and hitting .333/.379/.456 in 46 games, Escobar was promoted to the majors. He became the team's starting third baseman in the absence of the injured Chipper Jones and went 2 for 4 in his debut, hitting second. In his first at-bat, he singled off of Rich Hill before being erased on a double-play grounder by Edgar Renteria. He hit .321/.345/.536 his first week. 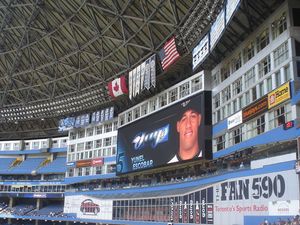 On the big screen at Rogers Centre.

Escobar was part of a deal with the Toronto Blue Jays that sent shortstop Alex Gonzalez and minor leaguers Tim Collins and Tyler Pastornicky to the Braves in exchange for Escobar and minor-league pitcher Jo-Jo Reyes on July 15, 2010. Before the swap, Escobar was batting .238 with no home runs and 19 RBIs. He didn't take long to impress the new club, hitting his first career grand slam during a six-run second inning as the Blue Jays crushed the Baltimore Orioles 10-1 on July 18th.

Escobar started off well in 2011, hitting a two-run walk-off homer off Oakland's Grant Balfour in the 10th inning on April 5th to turn a 6-5 deficit into a 7-5 Blue Jay win. Unfortunately, he suffered a mild concussion the next day when he banged his head into Andy LaRoche's knee while sliding into the bag on a triple. He was taken out of the game a half-inning later and became the first test case of Major League Baseball's new policy on concussions adopted just before the season, meaning he needed to be cleared by a medical specialist before being allowed back into action. He played 133 games in total, hitting .290 with 24 doubles and 11 homers, scoring 77 runs and driving in 48 as the second hitter in the Jays' line-up.

Late in the 2012 season, Escobar got himself in trouble when he was spotted playing with eye black in which was scrawled the phrase (in Spanish) "you are a ..." followed by a homophobic slur. Major League Baseball immediately announced that it was investigating the matter. Escobar explained that it was just a joke, but the Blue Jays handed a three-game suspension, with the blessing of Commissioner Bud Selig; he was also asked to undergo sensitivity training. He finished that season hitting only .253 with 22 doubles and 9 homers in 145 games. The Jays were concerned with his regressing production and his attitude, and on November 13th, he was one of the key players sent to the Miami Marlins in a blockbuster trade that saw the Jays acquire a package of high-priced veterans: SS Jose Reyes, Ps Mark Buehrle and Josh Johnson, C John Buck and IF/OF Emilio Bonifacio. Accompanying Escobar to Miami were fellow infielder Adeiny Hechavarria, P Henderson Alvarez, C Jeff Mathis and three minor league prospects. He didn't stay a Marlin long, however, as on December 4th, he was traded again, this time to the Tampa Bay Rays in return for a minor leaguer, Derek Dietrich. His guranteed two-year salary at $5 million per year had made him the highest-paid member of the Marlins, at a time when the team was busy reducing its payroll to a minimum, hence his quick departure was not unexpected, even if further confirmed the dismay of fans over the team's unwillingness to field a competitive team.

Escobar took over as the starter at shortstop for the Rays in 2013, making 149 starts at the position while hitting .256 with 9 homers and 56 RBIs - numbers almost identical to those he had posted a year earlier in Toronto. The Rays made it to the postseason as one of two AL wild card teams, giving Yunel a chance to see some playoff action for the first time of his career. He went 1 for 4 with an RBI in the Rays' 4-0 win over the Cleveland Indians in the Wild Card Game on October 2nd. He then was his team's best hitter in its loss to the Boston Red Sox in the ALDS as he went 7 for 15 (.467) with a pair of doubles. He stayed on as the Rays' shortstop in 2014 and on April 22nd was involved in a funny incident in a game against the Minnesota Twins, as he struck out on a 4-2 count. Knowing something was wrong, the Rays had in fact asked for a video review before the strike three pitch, but the officials who reviewed the tape mistook a ball for a foul ball, letting the clearly erroneous count stand. he was hitting .253 after 113 games as the Rays' starting shortstop when rumors surfaced on August 24th that he had been placed on waivers and claimed by the Oakland Athletics, although manager Joe Maddon stated the next day that Yunel was still part of the team's future plans. He ended playing 137 games that season, with a .258 batting average, 7 homers and 39 RBI, staying at the production level of the previous two seasons.

On January 10, 2015 Escobar and Ben Zobrist were traded to the Oakland Athletics for John Jaso, minor league shortstop Daniel Robertson and minor league outfielder Boog Powell. It was not clear what role the Athletics were envisaging for him, and it soon became a moot point because on January 14th, he was traded again, this time to the Washington Nationals in return for All-Star reliever Tyler Clippard. Once again, he was joining an uncertain situation, as the Nationals already had an All-Star quality player to ply short in Ian Desmond; the Nationals announced that Desmond would stay put and that Escobar would move to second base. However, injuries to Ryan Zimmerman and Anthony Rendon meant that Yunel instead spent the year playing third base, where he started 134 games (his other appearances were as the DH). He had a nice year with the bat, hitting .314 with 75 runs scored and 56 RBIs. However, the Nationals had a disappointing season and he was not part of their longer term plans. On December 11th, he was traded to the Los Angeles Angels of Anaheim in return for Trevor Gott and Michael Brady.

On August 17, 2016, he went 5-for-5 in a 4-3 Angels loss to the Seattle Mariners. What was interesting about this was it was already his fifth career five-hit game; simce 2000, only two players had had more, Ichiro Suzuki and Johnny Damon, both with seven.