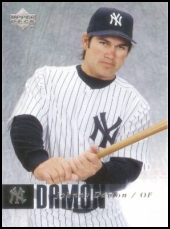 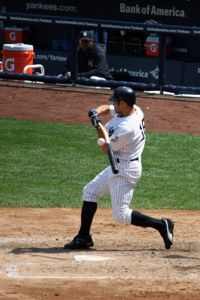 Johnny Damon was an outstanding major league hitter and fleet outfielder who played on several champion teams. In addition to his hitting prowess, he was an above-average fielder and an accomplished base stealer. His career totals show that he has an outside chance at being inducted into the Hall of Fame; however, his failure to reach the coveted 3000 career hits plateau make it only a remote possibility.

His mother was Thai, and his father was a member of the U.S. Army serving in the Vietnam War when they met. He spent much of his childhood as an Army brat, with the family eventually settling in Orlando, FL. He played high school ball with A.J. Pierzynski.

He was drafted in the first round of the 1992 amateur draft by the Kansas City Royals. He broke in with them for 47 games at age 21 in 1995, on a team that traded base-stealing outfielder Vince Coleman on August 15 of that season. The Royals finished 2nd in the AL Central division, which was to be their highest finish while Damon was with them.

His early years with the Royals were marked by moderately-good batting averages, decent amounts of stolen bases, and a lot of triples. On August 10, 1996, he tied a Royals record for most RBI in a game with seven in an 18-3 romp over the California Angels. That year, he hit in every spot in the order for the Royals. Then, in 2000, he had a peak season, hitting .327, with 42 doubles and 10 triples, and stealing 46 bases, which led the league. He scored 136 runs, which also led the league.

He was traded to the Oakland Athletics for the 2001 season, where he had an off-year, although he hit .409 in post-season play. He also played in 86 games in center field without committing an error (he did commit three errors in 67 games in left field). Jason Giambi was the hitting star and also the leader of that team. Giambi convinced him that he needed to "party like a major leaguer". His willingness to go out and show teammates a good time became a central part of his persona for the rest of his career; it helped to forge bonds among teammates, but team management did not necessarily think that Damon was the greatest of influence on young players by encouraging them to drink, party and stay up to the small hours of the morning.

Damon signed as a free agent with the Boston Red Sox after the 2001 season. In his four seasons with the Red Sox, his stolen bases declined gradually, but his batting averages went up. He also reached a peak of 20 home runs in 2004, and as lead-off man, scored at least 100 runs each season. He was named to the All Star team for the first time in 2002, and repeated in 2005. He hit .286 in the 2004 World Series which Boston swept.

Damon signed another lucrative free agent contract, this time with the New York Yankees, for the 2006 season. He did not miss a beat, scoring 115 runs for his new team, while slugging 24 home runs from the lead-off slot in the order. It marked the 9th consecutive season in which he had scored at least 100 runs. He was a major contributor to the Yankees' world championship in 2009 as their lead-off hitter, hitting .282 and scoring 107 runs. He made a particularly dramatic impact in Game 4 of the World Series against the Philadelphia Phillies when he hit a single after a drawn-out battle with closer Brad Lidge in the 9th inning, then stole two bases on one play with the Phillies in a defensive shift against Mark Teixeira, and ended up scoring the winning run on Alex Rodriguez's double.

The Yankees were not willing to re-sign him after their World Series win, and, finding no one willing to give him a multi-year contract, he signed a one-year deal with the Detroit Tigers for 2010. Playing DH and LF, he continued to be an effective hitter, but with the Tigers virtually out of the playoff race in late August, he was placed on waivers for the purpose of being traded to a contender. He was claimed by his former team, the Red Sox, but had a no-trade clause in his contract specifically excluding Boston. After pondering the matter for a day, he decided to invoke the clause, staying put in Detroit for the rest of the season. 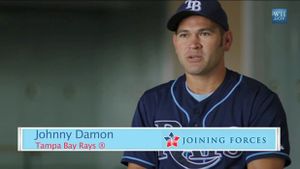 In 2011, he signed with the Tampa Bay Rays, at the same time as former Red Sox teammate Manny Ramirez. While Manny's stay in Tampa was short-lived and ended in the ignominy of a failed drug test in early April, Johnny was the team's primary DH the entire season and played an important role as one of the rare veterans on a very young team that caught fire late in the year and eliminated the Red Sox from the wild card spot on the season's last day. He played 150 games, hitting .261/.326/.418, with 152 hits, 79 runs, 29 doubles, 7 triples, 16 homers and 73 RBI. He also stole 19 bases and was only caught 6 times and had a 39-game on-base streak, which was a team record at the time (it would be eclipsed by Tommy Pham in 2019. In the ALDS, he went 4 for 17 with a homer against the Texas Rangers. However, in spite of his solid overall performance, he failed to find a team interested in his services for the 2012 season and was still unemployed when the season opened. He was facing retirement at age 38, fewer than 300 hits shy of the magic 3000 number, but finally signed a contract on April 17th, with the Cleveland Indians. He had to first head to the team's minor league training complex in Goodyear, AZ to work himself back into game shape, though. He made his debut with the Indians on May 2nd but, embarrassingly, had to take himself out of the game in the 6th inning when he began cramping up; he had gone 0 for 3 with a walk. He played 64 games for Cleveland, but hit only .222 with 4 homers and 19 RBI as the team's left fielder. With the team falling out of contention in the AL Central, the Indians decided to cut ties with him on August 3rd, replacing him with youngster Ezequiel Carrera. He failed to find another team for the rest of the season, or in 2013, ending his career with a whimper as he never made an official announcement that he was retiring.

After the 2012 season, Damon decided to go his mother's native Thailand to play for the Thai national team in the 2013 World Baseball Classic Qualifiers but also to conduct baseball clinics and act as a mentor to younger members of the national team. In 2014, he told a sports-talk radio show that he felt he had been "booted" from baseball because he refused to take performance-enhancing drugs, a claim which was met with skepticism, seeing that he played regularly until he was 38 and was clearly no longer a productive player when he was forced to retire.

Interestingly enough, the most similar player through age 31 was Tim Raines, and other similar players in the top ten included Pete Rose and Lou Brock. By the end of the 2011 season, the most similar was Vada Pinson, who fell just short of 3000 hits over a long career as an outfielder, and who also moved around a lot in the second half of his career. Interestingly, Pinson did not make the Hall of Fame because his ability to collect a lot of hits was his most visible asset and he did not reach the significant career milestone that would have made him a Hall of Famer in voters' eyes. A similar fate awaited Damon when he became eligible for Cooperstown in the 2018 Hall of Fame Election, as he received just 8 votes and dropped off the ballot.

He appeared in the movie Fever Pitch as himself. In November 2014, he announced that he was joining the cast of the television show Celebrity Apprentice for its next season, along with a number of former celebrities needing a paycheck (which was presumably not his case).