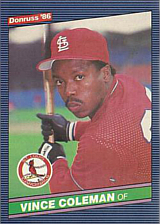 "What this field is doing is keeping me out of the Hall of Fame" - Vince Coleman, on Shea Stadium, 1992

"I don't know nothin' about him. Why are you asking me about Jackie Robinson?" - Vince Coleman, 1985

Vince Coleman meshed blinding speed with a stunning lack of self-awareness and mind-numbing judgment in parts of thirteen seasons.

A tenth round selection in the 1982 amateur draft by the St. Louis Cardinals, Vince Coleman stole 752 bases, three times exceeding 100 bags while winning six consecutive stolen base crowns to start his career, tying a streak of crowns set by Maury Wills. His 752 steals are even more remarkable in light of the fact that he collected only 1,425 base hits. Vince was not much of a hitter, and was once criticized by manager Whitey Herzog for having few RBI one season. Although a speedster, he played mostly left field instead of center field and never won a Gold Glove.

He won the 1985 National League Rookie of the Year Award and set the record for most stolen bases by a rookie with 110 in 1985; Juan Samuel had set the record two years earlier, and Tim Raines only two years before that. But Coleman does not own the Cardinals' franchise record for most steals in a season: the great Lou Brock stole 118 bases in 1974. Vince once held the all-time minor league record for stolen bases in a season, swiping 145 for the Macon Redbirds in 1982; the previous mark of 122 had been set only a year earlier by Jeff Stone. His mark was broken in 2012 by Billy Hamilton.

Coleman appeared in the 1987 World Series, stealing six bases. He missed the 1985 World Series because of a freak injury suffered in the NLCS: in one of the stranger incidents in baseball history, on October 13th, Coleman was injured by a tarpaulin machine. Before Game 4 of the NLCS, Coleman was on the field when the decision was made to cover the field because of a light rain. Coleman failed to notice that the mechanical tarp roller had come on to the field to keep the infield dry. The tarp machine rolled over Coleman's leg, chipping a bone in his knee, badly bruising his leg, and ending his season. The Cardinals won the series against the Los Angeles Dodgers, 4 games to 2. Coleman's replacement, Tito Landrum, hit .378 (14-for-37) and contributed strongly in the remaining 10 postseason games, though the loss of Coleman was frequently blamed for the Cardinals' seven-game loss to the Kansas City Royals in the World Series. This incident is one instance of the perceived "Curse of Butch Yatkeman".

Vince benefit greatly from the Astroturf at Busch Stadium. The New York Mets, always up for making horrendous personnel decisions in free agency, targeted Vince over another former Cardinal, Willie McGee, following the 1990 season and gave him four years and $11.95 million. This was after writer Bill James had famously said that Coleman was the one player he was certain would lose his value quickly, as his game entirely depended on speed, and that was always something that declined when a player turned 30. However, James was still an outsider at the time, so his analysis wasn't heeded and Coleman's career almost immediately went in the toilet after he signed with the Mets. He was a factor in Bud Harrelson losing the Mets manager job in 1991, then got into a physical altercation with replacement Jeff Torborg in 1992, earning a two-game suspension, around which time he claimed Shea Stadium's grass was keeping him out of Cooperstown. That spring, he had been named in a complaint of an alleged sexual assault that took place one year prior in Port St. Lucie, where the Mets held spring training. Shockingly finding no takers in a trade before 1993, Coleman injured Dwight Gooden's arm while recklessly swinging a golf club in the clubhouse and reached a new low in July when he tossed a lit firecracker into a crowd awaiting autographs in the parking lot at Dodger Stadium, injuring three children. Improbably, he was afforded opportunities in parts of four more seasons, making his last appearance with the Detroit Tigers in 1997.

Despite having a 13-year major league career, Coleman is in the odd circumstance of being the major leaguer out of Florida A&M with the fewest seasons (through 2019). The other players, Andre Dawson, Hal McRae and Marquis Grissom, all had even longer careers.

Coleman was hired by the Houston Astros as an outfield/baserunninng "development specialist" assigned to the Quad Cities River Bandits from 2013-2014. In 2015, he moved to the Chicago White Sox as a baserunning instructor. In 2017, he became the San Francisco Giants roving minor league baserunning and outfield coach.

He is the cousin of former NFL punter Greg Coleman. Like Greg, Vince was a punter at Florida A&M.