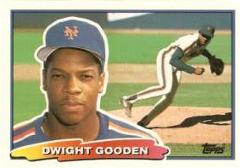 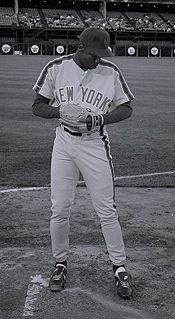 Dwight Gooden was signed as a 1st round pick in the 1982 amateur draft by the New York Mets and scout Carlos Pascual. In his only complete season in the minors, at age 18, Gooden was 19-4 with 300 strikeouts in 191 innings.

His career after 1985 was full of ups and downs. He had drug problems and injury problems, but was still able to contribute to the World Series-winning New York Yankees teams of 1998 and 2000, in addition to the Mets' World Series title in 1986. He threw a no-hitter in 1996 against a Seattle Mariners lineup that included Alex Rodriguez, Ken Griffey, Jr. and Edgar Martinez. His two most similar players through 2006, according to the similarity scores method, were David Cone and Tommy Bridges.

In his first autobiography, he claims that he was once held hostage by Kevin Mitchell. He had a number of run-ins with the law in the 1980s and 1990s, most of them related to substance abuse. He seemed to turn his life around after retiring from baseball. In the late 2000s, he served as senior vice-president of the Newark Bears of the Atlantic League, until November 2009. He then accepted a position as a spring training instructor with the Mets, but backed down without offering an explanation; one of his tasks would have been to counsel young players about the dangers and temptations of playing in New York. On March 24, 2010, he was charged with driving under the influence of drugs, child endangerment and leaving the scene of an accident after an automobile accident at 9:00 a.m. in Franklin Lakes, NJ. More concerns emerged about his health in 2016, when his son, Dwight Gooden Jr. issued a message stating that his family was very concerned about his health and his ability to take care of himself; former teammate Darryl Strawberry added that years of cocaine addiction had taken a big toll on Dwight and that he was still battling dependency issues. On July 22, 2019, he was again arrested on impaired driving charges in Newark, NJ, six weeks after another arrest in June on charges of possession of a controlled substance after being arrested for driving erratically.

He is the uncle of Gary Sheffield. Gooden and Sheffield were also neighbors, living on the same block in Tampa, Florida.