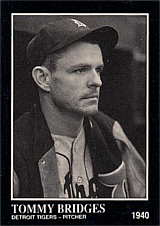 "Every time I see one of those T-shirts you see nowadays, the ones that say 'Baseball is Life', I think of Tommy Bridges... Baseball was everything to him." - Elden Auker

A hundred and fifty pounds of courage. If there ever is a payoff on courage, this little 150 pound pitcher is the greatest World Series hero." - Mickey Cochrane, following the 1935 Fall Classic

Known for his curveball, pitcher Tommy Bridges made his big league debut with the Detroit Tigers in 1930, inducing Babe Ruth to pop out to third base and striking out Lou Gehrig in his first game. He spent his entire career with the Tigers and was one of baseball's top pitchers during the 1930s. On August 5, 1932, he was zeroing in on a perfect game against the Washington Senators when Dave Harris pinch hit for pitcher Bobby Burke and laced a single with two outs in the ninth inning.

Bridges won more than 20 games in three straight seasons (1934 to 1936) and appeared in six All-Star Games in his career. He also played in four World Series, earning two complete game victories in the 1935 World Series when the Tigers defeated the Chicago Cubs in six games. One of the hardest throwers of his time, Bridges finished an impressive 12 times in the American League top ten for strikeouts, leading the junior circuit in both 1935 (163) and 1936 (175). However, he was also plagued by control problems, walking over 100 batters six times.

Bridges entered the Army in November 1943 and was discharged in August 1945. He returned to the Tigers briefly as a player in 1945 and 1946, also serving as a coach in the latter season. All told, he was 194-138 with a 3.57 ERA and 1,674 strikeouts in 424 big league games. This strikeout total was the Tigers franchise top mark until bested by Hal Newhouser in 1951, remaining the tops for a right-handed pitcher in the Motor City until surpassed by Hall of Famer Jack Morris in 1988. Additionally, Bridges and Hank Greenberg remain the only men to appear in four World Series as Tigers.

Bridges was named for both President Thomas Jefferson and Confederate President Jefferson Davis. His nephew, Don Bridges, played in the Philadelphia Phillies chain from 1962 to 1966 [1].