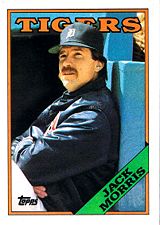 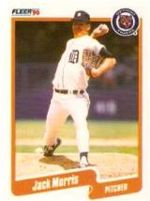 Surly Jack Morris was a bulldog on the mound, replete with supreme confidence and the competitive fire to match his good stuff. He won 254 games in his career and played on three World Series winners: the 1984 Detroit Tigers, the 1991 Minnesota Twins, and the 1992 Toronto Blue Jays. In addition to his dogged determination, Morris relished facing baseball's toughest hitters. No major league pitcher won more games during the 1980s than Jack Morris, though Morris benefited greatly from being on such strong teams; he only had a 105 ERA+.

Morris became a national star in 1984 when he pitched a no-hitter against the Chicago White Sox on April 7th, in the midst of the Tigers' amazing run to open the season. Morris had been a solid pitcher before, but that feat grabbed headlines, and he never lost his star status afterwards, thanks to his excellent performance the rest of the year and in the ensuing World Series. Although he never won a Cy Young Award, he was in the top 5 in the voting five times.

It has been argued by many that his general distaste for sportswriters during his playing career has negatively affected his quest for induction into baseball's Hall of Fame; a much stronger case can be made that he just wasn't good enough to warrant their votes. In 2010, he received 52.3% of the vote and in 2013, 67.7% in his penultimate year of eligibility and then fell to 61.5% and off the ballot altogether in his 15th and final try in 2014, when the ballot was loaded with strong candidates. Historically, pitchers from the 20th century with 250 wins have gotten into the Hall, although Morris' contemporaries Jim Kaat and Tommy John also passed that total but were not voted in by writers, while Bert Blyleven had to wait 14 years to receive his ticket to Cooperstown. Morris therefore had to wait for the Veterans Committee to examine his case, something it did for the first time in its examination of the 2018 class. He passed that test with flying colors, receiving 14 of 16 votes to gain election; long-time teammate Alan Trammell was also successful in that vote. Morris is tied at 254 wins with Red Faber, who is in the Hall of Fame. However, Morris has a high 3.90 career ERA, which is higher than any pitcher in the Hall of Fame. He also threw 175 complete games, a high total for his era, which is a point in his favor.

Morris was a Detroit Tigers' television broadcaster in 2003 and did some color commentary for the Minnesota Twins and Tigers a few times in 2005. In 2013, he worked one season as a radio broadcaster for the Toronto Blue Jays, alongside Jerry Howarth. In 2018, he joined the Tigers' regular broadcast crew, but he got himself into trouble in August of 2021 when he used an offensive accent and saying "Be very, very careful" when speaking of superstar Shohei Ohtani. He apologized on-air before the game ended, but it was enough to be suspended indefinitely.

Following Morris' election to the Hall of Fame, Tigers owner Christopher Ilitch announced that his number 47, along with Trammell's number 3 would be retired by the Tigers during the summer of 2018.

"To me, he was the best pitcher I ever had in my career." – Sparky Anderson (as seen on MLB Network's Prime 9: Best Non-Hall of Famers, 01-10-2012; Morris was ranked second behind only Tim Raines.)