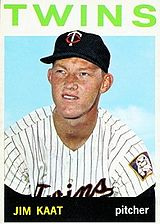 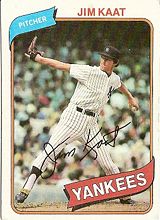 Jim Kaat, who won 283 big league games and also had a long broadcasting career, fluctuated between 14% and 30% in fifteen years of Hall of Fame voting by the BBWAA. In voting by the Veterans Committee in 2005, he was in fourth place, getting 54% of the vote out of the 75% necessary. In 2007, he was #2 with 63%. In 2015, he was once again 2 votes shy. He finally made it in 2022, as part of the "Golden Era" (1950-1969) ballot of the Veterans Committee. According to the similarity scores method, the most similar players to Kaat are Tommy John, Robin Roberts, and Fergie Jenkins.

He was the co-record holder, with Brooks Robinson, with sixteen consecutive Gold Gloves. His total of 16 is second overall to Greg Maddux, tied with Robinson. Recent studies have put into question his real prowess as a fielder, despite the plethora of Gold Gloves. In fact, his range as a fielder was well below average throughout his career, as was his fielding percentage, and he was not adept at turning double plays. For example, in 1969, he won a Gold Glove with a fielding percentage of .826 and a range factor of 1.49, both figures well below average for the time. It is likely his reputation was established by a few highlight plays early in his career and a general smoothness, supported by his knack for pitching quickly and his excellent pick-off move to first base, that made him appear to be a much better fielder than he was.

Kaat was the last of the Washington Senators that moved to Minnesota to retire as an active player, 22 years after the Senators left D.C. When the Minnesota Twins clinched their first pennant in 1965 (oddly enough in their old home in Washington, DC), he was the pitcher. He is the Twins' all-time leader with 189 wins and 2,959 innings pitched. He made 898 pitching appearances during his career, spending his last five seasons principally as a reliever, but appeared in over 1,000 games - 1,004 to be exact - thanks to 24 games as a pinch-hitter and 85 as a pinch-runner. That makes him part of a very small group of players to have accumulated both 1,000 games played and 100 complete games. Most of these are players from the early days of baseball who started off as pitchers then became position players, with Babe Ruth the most famous of these, and two very recent pitchers: Kaat and Dennis Eckersley, who actually pitched over 1,000 games thanks to a mid-career switch from starter to reliever. Another indication of how complete an athlete he was is that he is the last true pitcher to receive an intentional walk, which came in the second game of a doubleheader against the Milwaukee Brewers on September 1, 1970. It came in the 11th inning, with first base open after the Twins had just scored the go-ahead run on squeeze bunt; pitcher Bobby Bolin was instructed to walk Kaat to load the bases in order to face Cesar Tovar, a strategy that blew up in the Brewers' face as Tovar hit a two-run single. Since that game, the only two pitchers who have received an intentional walk were two-way players who were dangerous hitters in their own right: Brooks Kieschnick and Shohei Ohtani (as of Sept. 2021).

He worked fast on the mound. According to the New Historical Abstract by Bill James, Kaat said that after 2 hours, his fastball turned into a pumpkin.

Since his playing career ended, he was a Cincinnati Reds coach in 1984 and 1985, a Twins broadcaster from 1988 to 1993, and a New York Yankees broadcaster from 1995 to 2006. He has also done games regularly for the MLB Network since the station's inception in 2009. In 2018, he was named a special assistant to the Minnesota Twins organization, working on various community and business initiatives in Minnesota and in the Fort Myers, FL area where the Twins' spring training facilities are located.

In 2022, in recognition of his recent election to the Hall of Fame, the Twins announced that they would retire his uniform number, 36, in a ceremony to be held during the season.