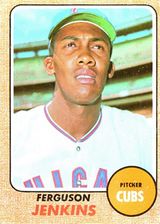 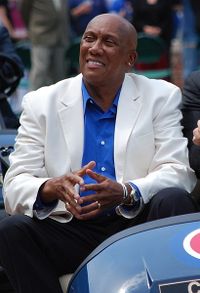 "Fergie is still the best pitcher in baseball. They can talk about Tom Seaver all they want, but I'll take Fergie." former teammate Ken Holtzman, 1974.

Jenkins was signed by scout Tony Lucadello for the Philadelphia Phillies as an amateur free agent on June 15, 1962. He was involved in two trades that turned out very well for the Cubs. He was acquired in April 1966 (along with outfielder Adolfo Phillips) from the Phillies for pitchers Larry Jackson and Bob Buhl. Then, after the 1973 season, Jenkins was dealt to the Texas Rangers for infielders Bill Madlock and Vic Harris. Madlock went on to be a multiple-time batting champion. Jenkins did continue to pitch well for a number of years, even if he only won 20 games one more time. He eventually returned to the Cubs to finish his career in 1982 and 1983.

His 1974 season with the Rangers still stands as the greatest by any pitcher in the history of the franchise. Joining a team that had finished in last place in 1973, he completely dominated the once and future World Champion Oakland A's that year, going 5-0, 0.60 with 5 complete games and 2 shutouts in 5 starts against them. In his first start of the year, he pitched a one-hitter over the A's. He missed the All-Star Game after hitting a rough stretch in May and early June, during which he was 1-7 with a 5.94 ERA, but he was just about unbeatable the remainder of the season, finishing 25-12, 2.82. He set club records that still stand with 25 wins, 29 complete games and 328 innings pitched. He issued just 45 walks, for a walk ratio of 1.23 per nine innings, the 7th best ever for a pitcher with over 300 innings pitched. On the last day of the season, Manager Billy Martin let him bat for himself, using the otherwise almost never-used provision of the designated hitter rule that allows a manager to forgo its use, and Fergie responded by going 1 for 2 with a run scored on his way to a 2-1 win, his 25th of the year. He finished behind Oakland's Catfish Hunter in the voting for the Cy Young Award, receiving 10 first-place votes to Hunter's 12. Hunter had a very similar season, going 25-12, 2.49, and this remains the closest a Rangers pitcher has ever come to winning the Cy Young Award. Jenkins did win the American League Comeback Player of the Year Award that year, as the Rangers finished second in the AL West, giving the A's a run for their money.

Jenkins became the first player in baseball history to be permanently suspended from baseball for a drug-related offense. He was arrested in Toronto on August 25, 1980 for possession of cocaine. Fourteen days after the arrest, Commissioner Bowie Kuhn banned him. In an unprecedented decision, he was reinstated by an independent arbitrator on September 22nd. He returned to the mound and had a few more solid seasons. He was back with the Cubs in 1982 and 1983 and led the team in wins the first year. He was pitching coach for Team Canada in the 1987 Pan American Games, working with future major leaguers Rhéal Cormier and Denis Boucher most notably.

In 1987, Jenkins was elected into the Canadian Baseball Hall of Fame. He had been the first baseball player to be named the "Canadian Athlete of the Year", after he won the Cy Young Award in 1971.

In 1988-1989, Jenkins was the pitching coach of the Oklahoma City 89ers, then played for the Winter Haven Super Sox of the Senior Professional Baseball Association. He won 7 games and had a 5.55 ERA. In 1990, he played for the Sun City Rays of the same league. He pitched in 3 games before the league folded.

In 2003, Fergie Jenkins served as the Commissioner of the short-lived Canadian Baseball League; the league's championship, the Jenkins Cup, was named for him. However, the league folded halfway through its first season. On December 13, 2010, Canada Post announced that Jenkins would be honored on a commemorative postage stamp issued in conjunction with Black History Month in February 2011; the stamp depicts a small picture of Jenkins pitching in a Cubs uniform, along with a current head shot.

Jenkins played with the Harlem Globetrotters basketball club during the off-season early in his career to stay in shape. See this link [1] for a picture.

Jenkins' 284 wins are easily the most of a Canadian major leaguer; as of the end of the 2011 season, Ryan Dempster was second with 112.