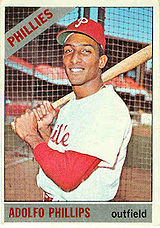 Adolfo Phillips was a centerfielder for eight seasons in the majors during the second dead-ball era. He had moderate power and stole bases.

He was the first major league position player to strike out in nine straight plate appearances. Following him were Steve Balboni, Eric Davis, Reggie Jackson, Bo Jackson and Mark Reynolds.

He was signed out of Panama by scout Gil Torres after completing a first year of pre-med studies at the University of Panama. Phillips came up originally with the Philadelphia Phillies in 1964, where he was the same age (22) as Dick Allen, who was playing in his first full major league season. He could not break into the team's strong outfield, however, which was composed of Johnny Callison, Tony Gonzalez and Johnny Briggs and was traded to the Chicago Cubs early in the 1966 season, in the trade famous for also sending pitcher Fergie Jenkins to the Cubs. From 1966 to 1969, Phillips played the bulk of his major league career for the Cubs. In his first seasons, he was considered a future superstar, because of his speed and power, earning comparisons to Willie Mays, but his aura faded fast, in large part because the Cubs and manager Leo Durocher considered that he struck out too much. By the end of his stay with Chicago, Phillips and Durocher were no longer on speaking terms. He was traded in June 1969 to the expansion Montreal Expos before the Cubs' famous "swoon".

Phillips was a year younger than fellow Panamanian Chico Salmon, whose major league career was during the same years as Phillips, 1964 to 1972. The two of them played almost the same number of games in the majors and had almost the same major league batting average. The two, however, are not on each others' similarity scores lists, because Salmon didn't have much power, didn't steal many bases and was primarily an infielder.

Following his big league days, Phillips played in the short-lived Inter-American League in 1979.