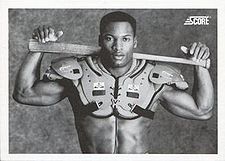 Bo Jackson was a high-visibility football and baseball star in the 1980s and 1990s. His careers in both sports would have lasted longer but for injuries. During this period Jackson's name became a household brand. The Bo Jackson merchandising campaign included a line of athletic shoes as well as a series of advertisements endorsing products with the phrase "Bo Knows." 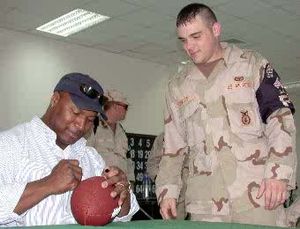 Bo signs a football for a member of the Air Force

Named after actor Vince Edwards, Vincent Edward "Bo" Jackson won the 1985 Heisman Trophy as an outstanding college football player at Auburn University. He was a powerful running back who combined blazing speed with the strength to run over would-be tacklers. One of two Heisman Trophy winners to play Major League Baseball (Vic Janowicz is the other), he is also a member of the College Football Hall of Fame. He was drafted first overall by the Tampa Bay Buccaneers in the 1986 NFL draft, but at first declined to pursue a career in pro football in order to play baseball. After a year, he changed his mind, and said he would attempt to play both sports. He was widely criticized at first for saying that for him football was "like a hobby". Most observers thought that a simultaneous career at the top level in both sports was a physical impossibility. He proved them wrong, and a number of others, most notably Deion Sanders and Brian Jordan, would soon follow him down that path.

Drafted again in 1987, this time in the 7th round by the Oakland Raiders, he played four seasons with them, from 1987 to 1990. He missed the 1992 season after a hip injury suffered in the NFL playoffs in 1991 that ended his football career. He sat out the entire 1992 baseball season after undergoing hip replacement surgery. He returned to play baseball two seasons after the surgery, the first player to play in the major leagues with an artificial hip.

He is one of six men who hit a home run and score a touchdown the same year.

Bo had a longer career playing baseball than football. He was signed as a 4th round pick in the 1986 amateur draft by the Kansas City Royals and scout Ken Gonzales. He made his major league debut that September; the Royals brought him up quickly to encourage him to give up his football career. Jackson played eight years in the majors from 1986 to 1994, including several seasons in the late 1980s with competitive Royals teams, and 1993 with the division-winning Chicago White Sox.

While on the White Sox, he played with Frank Thomas, who had also played football at Auburn University.

He had only one year in the minors, 1986, when he played 53 games for Memphis in the Southern League, hitting .277 with 7 home runs and stealing 3 bases. In the Majors in 1986, he hit what was then (and what still might be) the longest home run in Royals history - a 475-foot shot. At first, sportswriters had snickered when the Royals had called him up, claiming he was no match for big league pitchers (he did strike out 34 times in 25 games), but that home run quieted his critics. He may have been a raw talent, but he was a physical phenomenon.

On April 14, 1987 against the Detroit Tigers, Bo went 4 for 4 with a 3 run home runs and 7 RBI, ending any remaining doubts about his capacity as a baseball player, even though strikeouts would continue to bedevil him. He hit .235 with 22 homers and 53 RBIs in 1987, stealing only 10 bases and striking out 158 times. After the season, Bill James commented that he was likely the fastest man he had ever seen, but rarely got to display that speed in the majors, given his low stolen base total and lack of triples (he hit only 2 that year). That would change in future years, though, as he stole over 25 bases in each of the next two seasons, and had 4 and 6 triples. In 1988, Bo tied the record for most consecutive plate appearances with a strikeout (9) by a position player in the majors. Other players who had done so were Adolfo Phillips (1966), Steve Balboni (1984), Eric Davis (1987) and Reggie Jackson (1987). While he was 4th player in five years to do it, it would be 19 years until Mark Reynolds was next to join the 9-K club.

Bo didn't just have power. He could also steal a base, with 27 steals in 1988 and 26 in 1989. In fact, Bo became the first Royal in history to steal 25 bases and hit 25 home runs in a single season, when he did so in 1988, despite tearing a hamstring in May. In the prime of his career, he had a high success rate, seldom getting caught. Bo was a free swinger early in his career, striking out and getting few walks, but as he aged he struck out less often and got a higher percentage of walks.

In 1989, he was named to the All Star team at Anaheim Stadium and was the MVP of the All Star Game, with 2 RBI and a 448-foot home run to straightaway centerfield to lead off the game. This was his first appearance on a national stage in baseball and Vin Scully's call of the monster home run was a simple: "And Bo Says Hello!"

Though certainly Bo was known as a power hitter, he is probably best remembered in Kansas City for his arm strength and subsequent ability to throw out a runner at the plate, from the warning track. He appeared in Games 3, 4, and 5 of the 1993 ALCS with the Chicago White Sox against the Toronto Blue Jays, batting sixth in the lineup behind Frank Thomas at # 3, Robin Ventura at cleanup, and Ellis Burks at # 5.

He was named Comeback Player of the Year in 1993, after he had missed the 1992 season due to hip replacement surgery. He last played in the Major Leagues with the California Angels in 1994, his last game coming the day of the 1994 Baseball Strike. When the players returned to the field in 1995, he elected not to. He'd enjoyed his free time and decided to retire to raise his kids and pursue other interests.

Bo Jackson went back to Auburn University and earned a degree in family and child development. He started a motorcycle store and became a partner with Charles Barkley in a restaurant. He is involved in non-profit youth outreach, and co-owns a food processing and distribution company. More about his company can be found here: [1]

In retirement, he told reporters that had he known then what he knew now about football and the risk of injury, and particularly the long-term negative effects of head injuries, he would not have played football at all. He added: "The game has gotten so violent, so rough [...], there's no way I would ever allow my kids to play football today. Even though I love the sport, I'd smack them in the mouth if they said they wanted to play football. I'd tell them, 'Play baseball, basketball, soccer, golf, just anything but football.'"