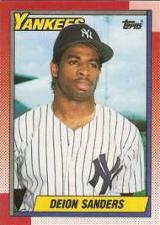 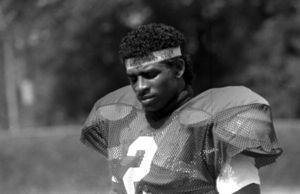 Sanders while playing football at FSU in 1988

Deion Sanders had success concurrently in Major League Baseball and in the National Football League in the 1990s. As a major leaguer, he played 9 seasons, with his peak in 1992 when he hit .304 and led the National League in triples with the Atlanta Braves. In the 1992 World Series, he hit .533.

Sanders was signed as a 30th round pick in the 1988 amateur draft by the New York Yankees and scout Bob Hartsfield.

Deion was also second in the league in stolen bases twice, with a high of 56 steals in 1997.

However, he lacked in plate discipline, and had relatively little power, which meant that he could only be a valuable baseball player when hitting close to .300. As a result, he retired from baseball earlier than from football, the reverse of what his other contemporary two-sport athletes did (Bo Jackson, Brian Jordan and D.J. Dozier).

In his prime, he was extremely flashy and loved to be the center of attention, something that is common in pro football, but rarer in baseball, where he was often at the center of controversies. As a rookie with the Yankees, he was publicly berated by veteran catcher Carlton Fisk of the Chicago White Sox at home plate when he failed to run out a pop-up. When he joined the Reds, owner Marge Schott directed one of her infamous insentitive remarks at him, saying that in her days "only fruits and women" wore earrings.

He retired from the NFL before the 2006 season, five years after his last major league baseball game. He played for the Atlanta Falcons, San Francisco 49ers, Dallas Cowboys, Washington Redskins, and Baltimore Ravens. He had 53 career interceptions (19th all time).

He was an 8-time NFL pro bowler. He was considered the best coverage defensive back of his generation, although he was not much of a tackler. Because of his blazing speed, he was used regularly to return punts and kick-offs, with a lot of success, although his value as a starting defensive back was so high that his coaches would hesitate to use him in such situations for fear of injuries. He also had excellent hands and would line-up regularly as a wide receiver as well.

He is the only athlete to play in a World Series and a Super Bowl.