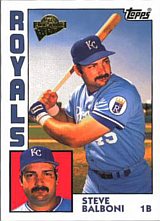 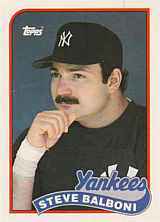 Steve Balboni had tremendous home run power and a tendency to strike out frequently. He was nicknamed "Bye Bye" because of the home runs he hit.

Balboni attended Memorial High School in Manchester, New Hampshire and Eckerd College in St. Petersburg, Florida. He was drafted by the New York Yankees in the fourth round of the 1978 amateur draft. They noted his tremendous power helped make the decision to draft him. He was named designated hitter on The Sporting News college All-America team in 1978.

He made it to the Yankees in 1981 and played in the big leagues through 1990 with a short comeback in 1993 on the Texas Rangers. He played for the Yankees from 1981 to 1983, when he was sent to the Kansas City Royals in a trade that was later protested by Yankees owner George Steinbrenner. Part of the trade included the Royals sending reliever Mike Armstrong to the Yankees. Armstrong turned out to be injured - or so Steinbrenner claimed - and seldom pitched for the Yankees. The Commissioner never acted on the protest. He was the starting first baseman for the Kansas City Royals from 1984 to mid-1988, when they traded him to the Seattle Mariners, with him returning to the Yanks in 1989 and 1990.

Balboni might be the only player to win multiple Triple A home run titles before and after being a regular in the majors. Playing for the Columbus Clippers, he led the International League in long balls in 1981 and 1982. After peaking in the majors with 36 in 1985 (3rd in the league), The Balb won back-to-back home run crowns in the American Association in 1992 and 1993. He was remarkably consistent in those league-leading seasons, hitting between 30 and 36 homers each of the four years. Balboni won six home run titles in the minors overall - in addition to his four Triple A titles, he led the 1979 Florida State League with 26 and the 1980 Southern League with 34, meaning he led his league four years in a row from 1979 through 1982. Balboni hit 420 homers in his pro career. In 2011, his prowess was rewarded with election to the International League Hall of Fame.

Steve later coached in the Kansas City Royals organization, developing their younger hitters. He was coach of the Spokane Indians in 1998 and Wilmington Blue Rocks in 1999-2000. After three years with the Royals, he joined the Montreal Expos organization, where he ran their extended spring training program and managed the Vermont Expos in 2001. Moving to the St. Louis Cardinals' chain, he was coach of the New Haven Ravens in 2002 and Tennessee Smokies in 2003-2004. As of 2010, Balboni was a major league scout for the San Francisco Giants. He still coaches part time at the Steve Balboni Baseball School and resides in Berkeley Heights, NJ with his wife. He has three sons, all of whom play baseball. His youngest, Matt, was a member of New Jersey's best American Legion team in state history, the Flor-Mad Royals. Steve helped coach the team in his spare time, and much of the team's success was attributed to his help as hitting coach.

In an odd set of coincidences, Balboni and Art Whitney were both born in Brockton, MA, both were born on January 16th (Balboni was born 99 years after Whitney), both were infielders and both played for teams in New York. However, Whitney never played in the American League as it did not exist during his major league career.