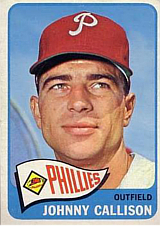 Johnny Callison was a four-time National League All-Star, doing much of his damage with the Philadelphia Phillies as part of a four-team, sixteen-season career spanning 1958 to 1973. In addition to several strong seasons with the bat, he is remembered as an excellent outfielder with an above-average throwing arm.

Callison was signed by the Chicago White Sox out of high school in 1957 and assigned to the Class A Bakersfield Bears, where he hit .340 with 17 home runs and stole 31 bases to earn California League Rookie of the Year honors. The next season, 1958, he advanced to the Triple A Indianapolis Indians of the American Association, where he led the league in home runs with 29. At the end of the season, he was called up by Chicago. In an 18-game look, he hit an impressive .297/.352/.469 in 71 at bats. He split the 1959 season between Chicago and Indianapolis, only hitting .171/.271/.288 in 41 games in the bigs and missing the team's World Series loss to the Los Angeles Dodgers. Over the winter, he was traded to the Philadelphia Phillies for journeyman third baseman Gene Freese. The White Sox, dealing away all sorts of promising youngsters at the time, would pay dearly.

Callison became a fan favorite in his new digs. He put together two solid, if unspectacular, seasons in 1960 and 1961 before exploding to a .300/.363/.491 line in 1962, playing in both of the year's All-Star Games. Johnny slugged 59 extra-base hits, leading the NL in triples (10) while driving in 83 runs and scoring a personal best 107 times. He batted .284/.339/.502 in 1963 with 73 more extra-base hits (36 doubles, 11 triples and 26 home runs) and scoring 96 more runs. In 1964, he was in serious contention to be the National League MVP. Together with Dick Allen, he had the Phillies cruising in the early going with their bats wreaking terror on National League hurlers. At the All-Star Game at Shea Stadium in New York, it was Johnny who hit the game-winning home run off Dick Radatz. In the final two weeks of the season, the Phils underwent perhaps the most memorable downfall in big league history, blowing what was once a lock pennant to the St. Louis Cardinals on the season's final day. On the season, Johnny hit .274/.316/.492 with 31 bombs, 104 RBI and 101 runs scored. He had another great season in 1965, though the Phillies were not contenders that year, leading the NL again in triples (16) while batting .262/.328/.509, belting 32 homers, driving in 101 runs and scoring 93 more times.

After retirement, Callison remained in Philadelphia where he made frequent appearances and had several business ventures. In 1997, he was inducted onto the Philadelphia Baseball Wall of Fame. He died in suburban Philadelphia in October 2006 at the age of 67.