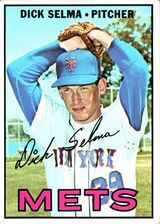 Dick Selma became the leader of the "Bleacher Bums" at Wrigley Field in 1969 after coming the the Cubs in an early-season trade with the Padres. Selma went 10-8 with the Cubs and was traded to the Philadelphia Phillies in the off-season.

Selma was a notorious needler, and his tongue got the best of him in 1972, when Phillies traveling secretary Eddie Ferenz, a former minor league hockey player, knocked him out onto a Newark Airport luggage carousel in response to an insult.

His son, Bart Selma, is an assistant coach at Fresno City College.