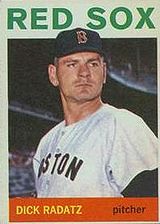 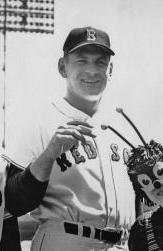 Dick Radatz was one of the ten best relievers according to The Relief Pitcher as a result of being the most dominant reliever of his era. He holds the major league record for strikeouts in a season by a reliever when he fanned 181 for the Boston Red Sox in 1964.

He hit his only career home run on June 5, 1965 as a member of the Red Sox against the Kansas City Athletics. The home run gave the Red Sox the lead, 4-3. They went on to win the game, 5-3, and Radatz got the win.

Radatz died on March 16, 2005 after falling down the stairs of his home and suffering a head injury.

Dick had been a baseball and basketball star at Michigan State University, where his time overlapped with another top reliever, Ron Perranoski.