HITTER'S OR PITCHER'S PARK?: Pitcher's, though not as much as commonly believed 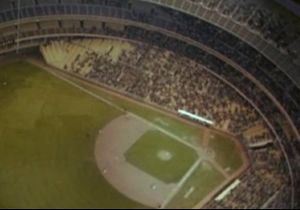 Shea Stadium was named for William Shea, a prominent New York lawyer who was able to procure a National League team for New York, the New York Mets, in 1960. The Mets began play there in the 1964 season. Football's New York Jets, who had also played at the Polo Grounds, were the second-longest running tenant. Shea Stadium was one of the larger stadiums in MLB, in part because it did double duty for both baseball and football (the Jets left after the 1983 season).

Shea Stadium hosted events other than baseball and football, though -- soccer games, boxing matches, pro wrestling, and religious gatherings. It also entered the annals of rock history for being the venue of many blockbuster concerts, starting with a Beatles gig on August 15, 1965. It has hosted the All-Star Game once, on July 7, 1964.

Other big events at the stadium include the 1968 AFL Championship Game between the Jets and the Raiders, as well as an appearance by Pope John Paul II on October 3, 1979.

The New York Yankees borrowed Shea as a second home during renovations to Yankee Stadium in 1974 and 1975 and briefly in 1998.

Six players hit regular-season homers at Shea for both the Mets and Yankees: Bill Sudakis, Elliott Maddox, Darryl Strawberry, Robin Ventura, Shane Spencer, and Tony Clark. Interleague play enabled the latter three to do it, but Strawberry’s achievement came amid unusual circumstances. On April 15, 1998, the Yankees had to play a "home" game at Shea because a 500-pound concrete and steel beam had collapsed at Yankee Stadium. When Strawberry took one deep in the fifth inning, stadium operators partially raised the Home Run Apple before lowering it again.