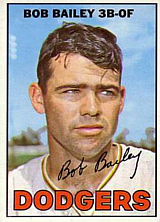 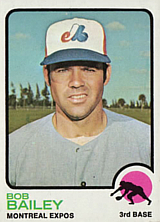 When the Pittsburgh Pirates signed Bob Bailey out of Wilson High School in Long Beach, California, in 1961, they gave him the largest signing bonus ever at the time, a reported $135,000. The son of former minor league infielder Paul "Buck" Bailey, Bob's professional career started with a cacophony of hype, but he only hit .220 for the Asheville Tourists of the Class A South Atlantic League. He did get everyone all excited again the next year when he was named Minor League Player of the Year by The Sporting News, after leading the Triple A International League with 108 RBI while hitting 28 home runs for the Columbus Jets. He made his major league debut for the Pirates in September 1962, hitting only .167 in 14 games.

In 1963, Bailey was handed the job as the Pirates' regular third baseman, but as one sportswriter put it: "a funny thing happened on the way to the Hall of Fame: Bob Bailey had a bad year", hitting .228 with 12 home runs and 45 RBI in 154 games. He would never quite live up to lofty expectations in Pittsburgh. In 1965, Bailey hit a walk-off homer on Opening Day, taking Juan Marichal of the San Francisco Giants deep in the 10th inning; the next Pirate to hit a winning home run on Opening Day was Neil Walker in 2014, also in a 1-0, 10-inning game. He was a regular for the Pirates until 1966, and though he did better than in his rookie year, he was considered a major disappointment as he never hit more than 13 home runs or drove in over 51 runs despite lots of playing time. What made it worse was that his play at third base was barely adequate, so that the Pirates were getting little production on either side of the ball.

Bob was traded to the Los Angeles Dodgers in return for shortstop Maury Wills prior to the 1967 season, but if his new team thought a return to his hometown would help him blossom, they were sorely mistaken. His two years in Los Angeles were nightmarish, with identical averages of .227 and a grand total of 12 home runs in 221 games. By the end of the 1968 season, he was no longer considered a disappointment, but a huge bust, and fingers were pointed at him for the Dodgers' fall from grace, given that the team had reached the World Series three of the four years prior to his acquisition but had been mired in 8th place during Bailey's two years. Bob was passed over in the 1969 Expansion Draft, but the Dodgers basically gave him away to the Montreal Expos one week later, to help the expansion team fill out its roster.

The Expos were not counting on Bob for much of anything, but due to the imbroglio caused by the unresolved situation of first baseman Donn Clendenon, he ended up the team's first baseman for their first game ever on April 8, 1969, in New York, [1] and collected the team's first base hit while driving in its first two runs. This opportunity could have slammed shut when he broke his ankle sliding into third base on April 17th, during Bill Stoneman's first no-hitter [2], but Clendenon failed to hold on to the first base job while Bailey was sidelined and he was eventually traded to the New York Mets. While Bailey split time with the newly-acquired Ron Fairly once he was healthy, limiting his season to 111 games, he had the best all-around year of his career thus far, hitting .265 with 9 home runs and 53 RBI. This was only a teaser for what was to come.

Bob started the 1970 season as a man without a position, getting some at bats spelling Fairly at first base, Mack Jones in left field, and the previous season's rookie sensation, Coco Laboy, at third base. He made the most of whatever playing time he got, and as Laboy struggled mightily, he eventually pushed him off the regular third base job with an unexpected display of power: 28 home runs in only 352 at bats, in addition to 72 bases on balls and 84 runs batted in. Bailey was the Expos' regular third baseman from 1971 to 1973, and one of the team's most reliable hitters, even if he hit only .233 in 1972. His best season was 1973, when he hit 26 doubles and 25 home runs and drove in 86 runs with a .273 average while drawing 88 bases on balls. He was one of the main reasons the Expos were still alive in the pennant race until the last days of September. By that time, his defensive play at third base was starting to draw sharp criticism, especially from ace relief pitcher Mike Marshall, who publicly complained about his lack of range. Manager Gene Mauch tried to remedy that problem by hiding Bailey in left field for the 1974 season. He continued to contribute at the plate, even drawing 100 walks for the only time of his career and becoming the first player in Expos history to reach the 100 home run plateau for the team, but his defensive play did not win him any raves. In 1975, as their farm system was starting to produce some interesting talent, the Expos decided to turn to "pitching, speed and defense" in what they pompously called "Phase II" of their development. Of course, none of these attributes described Bailey in any way, since his game was based on power and plate discipline, his speed had long deserted him, and he had never been confused by anyone for a glove man. He therefore spent an unhappy season as a substitute but still got into 106 games as a number of the youngsters the Expos were counting on proved not to be ready for prime time.

Bob was traded to the Cincinnati Reds before the 1976 season. By that point, his name stood atop the Expos' career leaderboard in most offensive categories and would remain there until the early 1980s. He was used mainly as a pinch hitter in a year when the Reds swept through the playoffs in seven games to become World Champions, but he did not get any playing time in the postseason. He moved to the Boston Red Sox in the last weeks of the 1977 season, then served as a part-time designated hitter during Boston's unsuccessful pennant run in 1978. In fact, his last game in the major leagues was the one-game playoff between the Red Sox and the New York Yankees on October 2nd [3], when he was used as a pinch hitter for Jack Brohamer in the 7th inning and quickly struck out on three pitches from Rich Gossage.

After retiring as a player, Bailey managed for three seasons in the Expos' farm system, first with the Calgary Expos in the Pioneer League in 1979, then with the West Palm Beach Expos in the Florida State League in 1980 and 1981. He later became a minor league hitting instructor for the organization. Bailey also managed the 1984 Columbus Astros, the 1986 Peninsula White Sox and Birmingham Barons and the 1987 Hawaii Islanders, becoming the last manager in Islanders history. He is an inductee in the Peninsula Pro Baseball Hall of Fame. Bailey passed away in January 2018 at the age of 75.