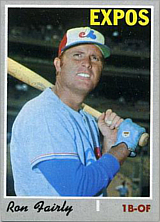 Ron Fairly played 21 seasons in the majors and was a two-time All-Star, representing both Canadian major league teams - the Montreal Expos in 1973 and the Toronto Blue Jays in the 1977 contest. His first 11 1/3 seasons were spent with the Los Angeles Dodgers. When he was selected for the 1973 game, he held the record for most games by a player before his first All-Star Game with 1,866; that record held until Nick Markakis was voted a starter in the 2018 All-Star Game with 1,928 games on his ticker.

At the age of 38, he played for the Blue Jays in their inaugural season of 1977. He led the team in doubles, home runs, RBI, and slugging percentage.

His 2,442 games played rank him 73rd on the all-time list for games played (through 2019). He hit over .300 twice: once, as a 22-year-old youngster in 1961, and once as a 36-year-old veteran in 1975. His value is somewhat obscured by the fact that he played during the second dead-ball era and that one of his main strengths was his ability to draw walks. He had led the Pacific Coast League with 100 walks in 1960. He had an Adjusted OPS of 140 or higher several times in his career, although he was rarely a full-time player due to his inability to hit left-handed pitchers. His best season for home runs was 19, but he hit 215 overall - the most of any player who never hit 20 or more in a season, and he holds the all-time record for home runs at Parc Jarry with 58.

Fairly was the first of what is now a long list of players to come out of the University of Southern California and achieve prominence in the big leagues. A few other alumni preceded him but with nowhere near his accomplishments.

After his playing career ended, he was a broadcaster for the California Angels from 1979 to 1984, the San Francisco Giants from 1987 to 1992, and the Seattle Mariners from 1993 to 2006. On January 19, 2011, the Mariners announced that Fairly would return to the M's booth on a rotating basis along with several other former M's announcers, filling the void left by the late Dave Niehaus. Fairly and the others appeared on radio alongside Rick Rizzs.