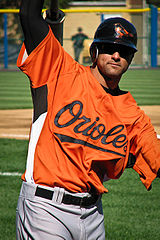 Nick Markakis is an outfielder who has played as a regular since he made his major league debut with the Baltimore Orioles in 2006.

Markakis became the first two-time winner of that award in 2003 when he had "one of the greatest two-way seasons in junior college history" according to Baseball America. He went 12-0 with a 1.68 ERA and hit .439 with 21 homers. At the plate, he led the nation in RBI (92) and on the mound, he led in strikeouts (160). He turned a $1.5 million offer from the Reds and re-entered the draft. The Baltimore Orioles took him with the 7th overall pick in the 2003 amateur draft and he was signed by scout Dave Jennings for a $1,850,000 bonus. In the 2003 European Championship, Markakis batted .323/~.364/.355 but led the Greek national team with 7 RBI in 8 games to help them finish in second place. He also pitched one scoreless inning. 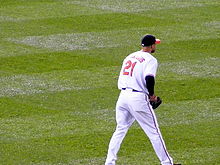 Nick began his professional career with the Aberdeen Ironbirds. Used solely in the outfield, he hit .283/.372/.395 and he was picked by Baseball America as the top prospect in the New York-Penn League. Markakis represented Greece in the 2004 Olympics and led the club with a .346 average, slugging .577. He hit .299/.371/.470 for the Delmarva Shorebirds at age 20 that year.

In 2005, Markakis hit .300/.379/.480 with the Frederick Keys, earning an August call-up to the Bowie BaySox, where he batted .339/.420/.573. He hit 41 doubles that year. Continuing to earn high praise from Baseball America, he was picked as the Orioles Minor League Player of the Year, the #6 prospect in the Eastern League, the top batting prospect, power prospect and strike-zone judgement hitter in the Carolina League and the #2 prospect in that loop, between Jarrod Saltalamacchia and Anibal Sanchez. He made the Carolina League All-Star team and was 7th in the league in average.

Nick became the regular 2006 Orioles right fielder and batted .291/.351/.448 for the season. However, he started very slowly, hitting only .182 in April, and while he improved each month, he was still hitting only .257 at the end of June. Hitting over .400 in July and over .350 in August helped a lot to raise his average. He played 161 games in 2007, hitting 43 doubles,d 23 homers and 112 RBI as part of a batting line of .300/.362/.485, making him an outstanding offensive performer, although just a notch below All-Star level. Even though he was only 23 at the time, he never took that last step to stardom, but instead settled at that level, collecting an OPS+ above 100 year after year and standing out as the most dependable player on a perennially week Orioles team.

In 2012, the Orioles suddenly became good in a completely unexpected development. Markakis was his usual self, hardly missing a game, hitting just below .300, while producing his share of extra-base hits and drawing a large number of walks. In mid-season, he was moved to the lead-off spot in the line-up, after injuries to Brian Roberts and Nolan Reimold, and he did very well, hitting .336 in the role. He was hitting .297/.361/.471 in 103 games with 13 homers in 103 games when his thumb was fractured by a CC Sabathia pitch in the 5th inning of a key game against the New York Yankees on September 8th. He had already missed the month of June with a broken hamate bone in his right hand - the first time he had missed any playing time since coming up in 2006 - and the second fracture put him out for the rest of the season with his team tied with the Yankees with three weeks left to play. The Orioles did make the postseason, but he was unable to play in any of the games. In 2013, he was back in full health, playing 160 games with a .271 average, 10 homers and 59 RBIOs, although he did score 89 runs. Still, the season was well below par for him, as for the first time his OPS+ fell below 100, to 88, the result of the drop in both power and batting average. He bounced back in 2014 however, as did the Orioles, who ran away with the AL East title with a strong second half. As the team's lead-off hitter he hit .276 with 14 homers and 50 RBIs and scored 81 runs, his OPS+ moving back to his customary range at 106. For the first time he was able to play in the postseason, going a combine 8 for 31 (.258) with a homer an 3 RBIs in two rounds of playoff action. He ended his Orioles career with 1365 games played for the team.

On December 3, 2014, Markakis signed a four-year free agent contract with the Atlanta Braves worth a total of $44 million. The Braves had traded starting RF [[Jason Heyward] earlier that off-season and were looking to Markakis to replace him in 2015. Shortly after signing the contract, he underwent surgery on a herniated disk in his neck. As he arrived in spring training, he explained that the neck surgery was the main reason he did not re-sign with the Orioles, because GM Dan Duquette did not want to take the risk that it would affect his production down the line. On June 18, 2015 set a new all-time record by playing his 393rd consecutive game in the outfield without committing an error; his last miscue had come on August 10, 2012. The record had previously been held by Darren Lewis. However, his power seemed to be gone, as he did not hit a single home run before the All-Star break. He finally hit his first long ball as a member of the Braves on July 20th, a two-run shot off Brandon Beachy of the Los Angeles Dodgers and was in fact leading the team in doubles with 22 at that point. When he committed an error in right field on June 25th, it ended his record streak of consecutive errorless games as a right fielder at 393; it was his only miscue of he season. He hit .296 in 156 games that season, with 38 doubles but only 3 homers. He scored 73 runs and drove in 53.

In 2016, the Braves got off to an awful start as they went into a rebuilding period. Markakis stayed in the starting line-up throughout the turmoils and he and fellow veteran Freddie Freeman were the team's best offensive players. In 158 games, he hit .269 - the lowest batting average of his career - but bounced back with 38 doubles and 13 homers. No longer the team's lead-off man, he scored 67 runs, but his RBI total shot up to 89 thanks to added opportunities to contribute with men on base. On April 14, 2017, he drive in the first two runs in the history of SunTrust Park as his 1st-inning hit sent Ender Inciarte and Freeman to the plate. The Braves went on to win the game, 5-2, over the San Diego Padres. He played 160 games that season, hitting .275 with 8 homers and 76 RBIs.

Heading into the 2018 season, there was no reason to see Markakis as anything other than a solid contributing player, but not a star. However, he had a torrid first half, and on July 8th was leading the National League with 113 hits and batting .322 with the team surprisingly holding on to first place in the NL East. Not only was he named to the All-Star team for the first time, he was voted in by the fans as one of three starting outfielders. In doing so, he set a new record for most games played before a player's first All-Star appearance with 1,928 games. The previous record holder was Ron Fairly, who had played 1,866 games before being named to the NL All-Star squad in 1973. He finished they year at .297, playing all 162 games, with 43 doubles, 14 homers and 93 RBIs. He won his third Gold Glove and the Silver Slugger Award for the first time and finished 18th in the MVP vote, the first time he had received any support. He then went just 1 for 12 in the Division Series which Atlanta lost to the Los Angeles Dodgers.

In 2019 he missed significant time for the first time since 2012, being limited to 116 games as a result of a fractured wrist that cost him all of August and the first half of September. He fell back from his previous season, hitting .285 with 9 homers and 62 RBIs, giving him an OPS+ of 98, the second time in three years he finished below 100. In the postseason, he went 3 for 21 with a double as once again the Braves were eliminated at the Division Series stage, this time by the St. Louis Cardinals. In July 2020, he was one of the players who announced their intention to sit out the season due to health concerns at the time of the coronavirus pandemic. He took the decision while being fully conscious that, at his age, it was not certain he would be able to return to the majors at a later date. He stated that the fact teammate Freddie Freeman had tested positive and was going through a rough time fighting the disease had steered him towards his decision. But on July 29th, he had second thoughts and indicated he was ready to rejoin his teammates. He made his return to the field as a pinch-hitter on August 5th, then started in his familiar right field spot the next day. In that game, he hit a walk-off homer in the bottom of the 9th off Wilmer Font to give Atlanta a 4-3 win over the Toronto Blue Jays, only the second walk-off blast of his long career.