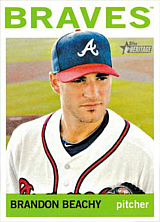 On September 7, 2011, Brandon Beachy set an Atlanta Braves team record for a rookie by recording his 140th strikeout of the year in a 3-2 loss to the Philadelphia Phillies. The previous record had been set by Jair Jurrjens, the pitcher Brandon replaced in the Braves' rotation when he made his major league debut in the final push of the 2010 season (Irv Young holds the franchise record with 156 for the Boston Beaneaters in 1905). Beachy finished the year at 7-3, 3.68 in 25 starts, recording 169 strikeouts in 141 2/3 innings.

On May 17, 2012, Beachy recorded his first major league shutout in a 7-0 win over the Miami Marlins. That game lowered his National League-leading ERA to 1.33, while his record was 5-1. Exactly a month later, on June 17, he was placed on the disabled list after being diagnosed with a partial ligament tear in his elbow. He was still tied for the major league lead with a 2.00 ERA at the time, but he underwent Tommy John surgery on June 21, putting him out of action for a full year. He was 5-5, 2.00 in his 13 starts, pitching 81 innings. After the season, he indicated he was eyeing a return to the Braves in June 2013. He was off by a month, as his return finally came on July 29. After a couple of no-decisions, he picked up his first win on August 9 with a 5-0 victory over the Miami Marlins, the Braves' 14th straight victory. He pitched 8 shutout innings, giving up 3 hits and a walk. He was 2-1, 4.50 in 5 starts in the big leagues but did not play in the postseason.

Beachy suffered an elbow injury in the spring of 2014 and had to undergo Tommy John surgery for a second time as a result. He was the second starting pitcher for the Braves to get the bad news that spring, following Kris Medlen. As a result of the surgeries and concerns over their recovery time, both he and Medlen were not tendered new contracts by the Braves after the season, becoming free agents. It was as a member of the Los Angeles Dodgers that Brandon made his return to the major leagues, on July 11, 2015. He was a 7-1 loser to the Milwaukee Brewers in that game. He made one more start before being designated for assignment, returning to the Dodgers on a big league deal for 2016. Unfortunately, elbow tendinitis plagued him whenever he tried to pitch, and he walked away from the team and the game. Two years removed from injuries, he signed with the New Britain Bees of the Atlantic League in August 2018 and showed enough to be offered a minor league deal by the San Francisco Giants for 2019. He was released in July without making it back to the big leagues. In August, he returned to Atlantic League action with the Long Island Ducks.