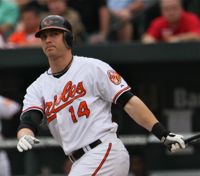 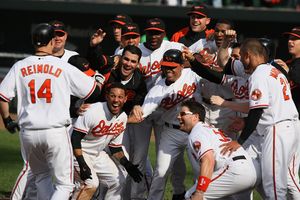 Nolan Reimold is congratulated by teammates after hitting a game-winning, three-run home, May 27, 2009, in Baltimore

Outfielder Nolan Reimold hit .319/.414/.393 as a college freshman in 2003. The next year, he increased his home run total from 1 to 13 and hit .404/.493/.749, finishing third in the Mid-American Conference in average and making the All-Conference team. In '05, hed led the Conference in homers (20) and batted .360/.496/.770. He lost the batting title by one point to Andy Hudak and was 2 RBI behind leader Paul Frietch. He had the best slugging percentage in NCAA Division I and Baseball America named him as a third-team All-American DH.

On July 6, 2014, he was picked up on waivers from the Orioles by the Toronto Blue Jays, who were looking for some outfield depth in their battle with the Orioles for the AL East title. He played 22 games for the Jays, hitting .212 with 2 homers and 9 RBI. He sealed his fate on August 24th, when he had to take over in right field when Jose Bautista was ejected late in a close game against the Tampa Bay Rays. In the 10th inning, he completely misjudged a routine fly ball hit by Logan Forsythe, letting it fall for an automatic double that led to the winning run. He made only one more appearance with the Jays before being placed on waivers again. This time, he was claimed by the Arizona Diamondbacks on August 28th. He played 7 games with the D-Backs, ending the year at .232 in 29 games.

Nolan returned to the Orioles before the 2015 season when he signed on a s a free agent on February 3rd. He played 61 games as a back-up outfielder that year, hitting .247 with 6 homers and 20 RBIs. He then saw considerably more playing time in 2016, taking advantage of various injuries to find his way in the line-up. On July 24th, however, he made his mark as a pinch-hitter, with a two-run walk-off home run off Cody Allen of the Cleveland Indians to give the O's a 5-3 win.