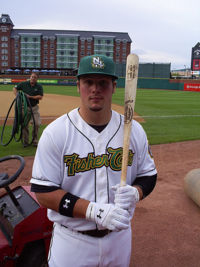 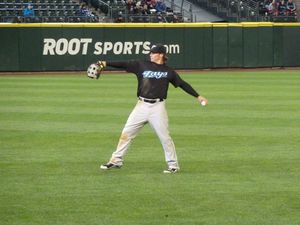 Travis as a Jay

Outfielder Travis Snider was signed by the Toronto Blue Jays and scout Brandon Mozley as the first round pick in the 2006 Amateur Draft. He made his pro debut that year with the Pulaski Blue Jays, where he hit .325 with 11 home runs in 54 games. In 2007, he was a starting outfielder for the Lansing Lugnuts of the Midwest League, hitting .313 with 35 doubles, 7 triples and 16 home runs in 118 games.

Snider sped through the Blue Jays' farm system in 2008, dominating the competition in A, AA and AAA. He hit .279 with 4 home runs in 17 games for the Dunedin Blue Jays of the Florida State League, then hit 21 doubles and 17 home runs in 98 games for the New Hampshire Fisher Cats of the Eastern League, and topped it off with a .344 average in 18 games with the Syracuse Chiefs in the International League. At age 20, he was young for the FSL, never mind the two higher levels, but still held his own extremely well, prompting his rapid call to the Show. He was called up on August 29, after Kevin Mench was released. He was immediately inserted in the starting line-up in left field against the New York Yankees and went 1 for 3 with a double. He hit .301 with 6 doubles and 2 homers in 28 games in his first taste of the majors.

Travis Snider continued his red hot hitting in spring training of 2009, winning a spot in the Blue Jays' starting line-up on opening day. In his first two at-bats of the season, he hit a double and an opposite field home run off the Tigers' Justin Verlander on April 6. He batted ninth and platooned in left field with Jose Bautista in the first weeks of the season. After his good start, he began slumping badly, and on May 20 was sent down to AAA Las Vegas to regain his stroke. He was hitting .242 with 3 homers and 12 RBI in 32 games, with most of his counting stats coming in the season's first two weeks. However, he did not moan upon arriving in Las Vegas, instead proceeding to tear the cover off the ball, hitting at a clip of .337/.431/.663 in 48 games, with 14 homers in 175 at bats. Shortly after Toronto lost RF Alex Rios on waivers to the Chicago White Sox, Snider was recalled. In his first game back on August 18 he went 2 for 3 with a walk, hitting a home run off Boston's Josh Beckett in a 10-9 loss. He finished the season with a .241 average in 77 games in Toronto, with 9 homers and 29 RBI.

2010 was similar to the previous year for Snider, in that he opened the season in the starting line-up, and struggled a bit at the plate. He was finding his stroke when he was stopped by a wrist injury, and the Blue Jays sent him down to AA New Hampshire to recuperate (he also played a handful of games at lower levels of the organization). In Manchester, he hit .296 in 20 games with 5 doubles and 5 homers, and was back in Toronto to finish the season. In the majors, he hit .255 in 82 games with 20 doubles and 14 homers. The good power numbers seemed to be a sign that at 22, Snider was ready to be a major league starter, but he had another setback in 2011. The pattern had become familiar by then: winning a starting job in spring training (this time as the left fielder), then struggling against big league pitching, as he hit only .184 in his first 25 games. Back down he went, this time to AAA Las Vegas, and there he found his hitting stroke again, hitting .333/.403/.488 in 49 games. In early July, the Jays made a couple of future-looking moves, releasing veteran Juan Rivera and moving All-Star Jose Bautista from RF to 3B. This made room for Snider to return, and in his first game back on July 4th, he hit three doubles against the Boston Red Sox to push his batting average above .200. Four days later, on July 8th, he tied a career best by driving in 5 runs in an 11-7 win over the Cleveland Indians, including a 2-run homer off Mitch Talbot. He continued to hit well after the All-Star break, having another 5-RBI game on July 20th against the Seattle Mariners, as he reached the .250 mark in batting. However, he couldn't keep up the production over the next few weeks and became the victim of a number's game on August 4th, a week after the Jays acquired OF Colby Rasmus in a trade. Snider was sent down to AAA, while phenom Brett Lawrie was called up to make his major league debut at third base, and slugger Bautista moved back to right field. Snider finished the season with a .225 average in 49 major league games, with 14 doubles, 3 homers and 30 RBI; in Las Vegas, he hit .327 in 61 games.

In 2012, the Blue Jays decided to go with a starting outfield of Batista, Rasmus and Eric Thames to start the season, sending Snider to AAA to begin the year. He again hit very well at Las Vegas, with a .335 average, 16 doubles and 13 triples in 56 games, interspersed with a 5-game rehabilitation outing in A-Ball. He was called up to Toronto on July 20th, and while he hit only .250 in 10 games, he slammed 2 doubles and 3 homers. However, with the Jays brimming with outfielders but short on the mound, they traded two of the superfluous fly-chasers on July 30th, sending Thames to the Seattle Mariners for Steve Delabar, and Snider to the Pittsburgh Pirates for Brad Lincoln. He played 50 games for the Pirates, maintaining his .250 batting average, with 5 doubles and a homer for an OPS+ of only 84. Still, he maintained his job as the Bucs' starting rightfielder in 2013, being the left-handed half of a platoon with righty-hitting Jose Tabata. On May 21st, he was the hero of the Pirates' 5-4 win over the Chicago Cubs, hitting a pinch grand slam against James Russell with two outs in the 6th inning. It was the first grand slam of his career, and the first by a Pirates pinch-hitter since 2008. He played 111 games that season, hitting .215 with 5 homers and 25 RBIs, but the Pirates made the postseason for the first time since 1979, with Travis going 0 for 1 in his only appearance, which came in the [2013 NLWC|Wild Card Game]].

He had a nice bounce-back season in 2014, when he was the Pirates' most-used right fielder. He played a career-high 140 games, hitting .264 with 13 homers and 38 RBIs. His OPS+ of 118 was the highest of his career. he played in the Wild Card Game again, but went 0 for 2 this time. With the Pirates having a number of young outfielders in the pipeline, they decided on January 27, 2015 to trade Travis to the Baltimore Orioles in return for pitching prospect Stephen Tarpley and a player to be named later. He played 69 games for the Orioles, hitting .237 with 3 homers and 20 RBIs, his disappointing production leading to his release on August 15th. The Pirates picked him back up, signing him five days later, and he played 18 games for them, hitting .192 with 1 homer and 8 RBIs. He was used as a pinch-hitter in the Wild Card Game against the Chicago Cubs on October 7th and managed a single off Jake Arrieta but ended up stranded on third base as the Bucs were shut out, 4-0.

A free agent after the 2015 season, Travis signed a minor league contract with the Kansas City Royals on January 30, 2016.

Travis lost his mother Patricia in a car accident in 2007, and he was using the pink bats distributed to MLB teams for Mother's Day 2009 to honor her. He would play catch with his mother when he was younger, until his father took over when his athletic ability started to develop. "Mom was the one who made sure I got to practice, made sure I had what I needed and then had a good, home-cooked meal waiting the day before a big game," Snider said during an interview on MLB.com.