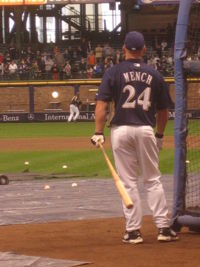 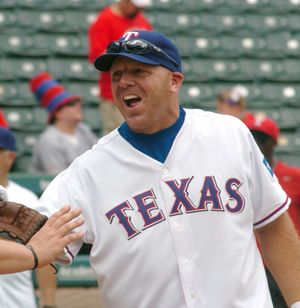 Kevin Mench was known around the league as "Shrek". It was reported that his head, hat size 8 1/4, was the largest in baseball.

While at the University of Delaware, he topped the America East Conference in hits with 76, home runs with 19 and RBI with 70. He led the NCAA in home runs in 1998 with 33. He led the Appalachian League in 1999 with 16 home runs and ranked in the top 5 in batting average, RBI, hits, doubles and slugging percentage.

He had two brothers - Chris and David - whose pitching careers were cut short by arm injuries.

Mench debuted with the Hanshin Tigers on Opening Day, 2009, hitting 6th and playing right field. He went 0 for 4.