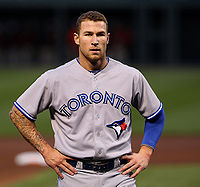 Brett Lawrie was a first-round pick in the 2008 amateur draft and made his major league debut in 2011. He has also played for Team Canada. His sister Danielle Lawrie has been an Olympic softball player.

The B.C. native played summer ball with the Langley Blaze of the British Columbia Premier League.

A catcher in the amateur ranks, Lawrie played for Canada when they won Bronze in the 2006 World Junior Championship. He hit .700 for the Canadian junior national team in spring training of 2008. In the Dominican Summer League camp, he hit .500 with 8 home runs and 24 RBI in 8 games. Lawrie was the 16th pick of the 2008 amateur draft, taken by the Milwaukee Brewers, who had a Canadian GM, Doug Melvin. It was the 4th-highest a Canadian had been picked in the MLB amateur draft and the highest a position player had gone; Adam Loewen (4th), Jeff Francis (9th) and Phillippe Aumont (11th) had been picked higher.

Lawrie was the star for the host country in the 2008 World Junior Championship, batting .469/.500/1.000 with 16 RBI, 4 triples and 3 homers in 8 games. He threw out 4 of 8 attempted base-stealers. He led the event in home runs and RBI. Only Erik van Dorp of the Netherlands had a better average among players with 30 or more plate appearances. Lawrie was named to the All-Star team at catcher but Canada only finished 6th and Yung-hoon Sung of South Korea beat him out for MVP honors.

Lawrie was with Canada for the 2008 Olympics, going 0 for 10 as a backup LF/DH. He hit a sacrifice fly and drove in another run on a grounder. He was also selected as a backup on Canada's team for the 2009 World Baseball Classic.

Signed by scout Marty Lehn for $1.7 million, Lawrie made his pro debut on April 9, 2009, for the Wisconsin Timber Rattlers. He was 0 for 4 with a strikeout and a run against the Quad Cities River Bandits; the next day, he homered, stole two bases, scored twice and drove in three. He hit .274/.340/.436 that first season, between Wisconsin and the Huntsville Stars of the Southern League, holding his own in AA before turning 20. He was used as a second baseman that first year and had 37 extra-base hits, showing excellent power for such a young age. He was ranked #59 on Baseball America's top 100 prospect list before the 2010 season, which he spent entirely at Huntsville. There he hit .245/.346/.451 in 135 games, with 36 doubles, 16 triples and 8 homers while stealing 30 bases. He played with the World Team in the Futures Game in both 2009 and 2010.

After the 2010 season, he was acquired by the Toronto Blue Jays in a trade that sent pitcher Shaun Marcum to the Brewers. His ranking on the top 100 prospect list had improved to #40 by then. Although there was speculation that the Jays may have him start the 2011 season directly in the major leagues, he was in fact sent to the AAA Las Vegas 51s, where he moved to third base. He was an unstoppable force with the bat in the Pacific Coast League, hitting .353 with a .661 slugging percentage in 69 games. The Jays, dissatisfied with the play of Edwin Encarnacion at third base, were about to call him up to the big club in late May, but the plans were put on hold when Lawrie was hit by a pitch which broke his left hand. He missed a month of action, and had to make a rehabilitation stop with the Dunedin Blue Jays of the Florida State League, but by early August, he was back to beating up opposing pitchers in AAA. On August 4th, the Jays called him up and immediately inserted him in the starting line-up for the next day's game, moving slugger Jose Bautista, who had been manning third base for a couple of weeks, back to right field. In his first big league game, he went 2 for 4 as the Jays beat the Baltimore Orioles, 5-4 on August 5th. He got a base hit and an RBI in his first major league at bat, and two days later, hit his first major league home run off Alfredo Simon of the Orioles. He then hit his first grand slam on August 10th against the Oakland A's Craig Breslow in the 6th inning of a game at the Rogers Centre, leading Toronto to an 8-4 win. He finished the year with a batting line of .293/.373/.580, with 9 homers and 25 RBI in 43 games. He was named the third baseman on the 2011 Topps All-Star Rookie Team after the season.

Lawrie hit the first two walk-off home runs by a player born in the 1990s. He had hit a walk-off shot off Dan Wheeler of the Boston Red Sox in the bottom of the 11th inning on September 5, 2011, for a 1-0 Blue Jays win, then connected off Mike Adams of the Texas Rangers leading off the 9th inning on May 1, 2012, for an 8-7 win. On May 15th that year, Brett threw a huge tantrum after being called out on strikes facing Fernando Rodney in the 9th inning of a game against the Tampa Bay Rays. He slammed his helmet to the ground, and it bounced up and struck home plate umpire Bill Miller on the hip. He had already been ejected at that point, and he was later fined and handed a four-game suspension. A number of fellow players commented that Lawrie had gone over the line in showing his disagreement with the call, and a chastised Lawrie stated the next day that he planned to apologize personally to Miller before that day's game. On July 18th, he almost suffered a serious injury when he dove over a safety railing into a camera bay while trying to catch a foul ball hit by Mark Teixeira at New Yankee Stadium. He flipped completely over the railing, landing awkwardly five feet below, and was unable to put pressure on his right leg when he tried to stand up. He was immediately taken out of the game, but x-rays came back negative. It was particularly scary for the Jays as they had put star slugger Bautista on the disabled list the previous day with a wrist injury. Altogether, he played 125 games for the Jays that first full season, hitting .273/.325/.405 with 26 doubles and 11 homers, 73 runs scored and 48 RBI.

Lawrie had more injury problems in the spring of 2013. He had to forgo a chance to play for Team Canada in the 2013 World Baseball Classic because of a strained oblique muscle that put him on the disabled list for the first few games of the season. He ended up playing only 107 games during that season, hitting .254 with 11 homers and 46 RBI, one of many disappointments on a Blue Jays team that had been built to compete but instead finished in last place. More injuries set him back in 2014 as he fractured in his right index finger on June 22nd. He had started the year hitting with more power than he had ever shown, even though his batting average dropped for the third straight year. He was hitting .244 with 12 homers - a career high - and 38 RBI when the injury occurred, and as a result he was out of the line-up until August 5th. When he returned, he exited his first game back in the 4th inning because of tightness in his back. He played only one more game after the injury, on August 5th but exited in the 4th inning and did not return before the end of the year. His injury was one of the factors that led to the Blue Jays, who had surged to first place in the AL East by the middle of June, to finish in third place, well back of the division champion Baltimore Orioles. Obviously disappointed by Brett's inability to stay healthy and wanting to make another serious push for the postseason in 2015, the Jays traded him to the Oakland Athletics on November 28th, along with youngsters Kendall Graveman, Sean Nolin and Franklin Barreto, in return for All-Star 3B Josh Donaldson.

Lawrie was at the center of things when the Athletics met the Kansas City Royals in a three-game series on April 17-19, 2015 in Kansas City. In the opening game, he slid hard into second base, injuring SS Alcides Escobar, who had to sit out the rest of the series. The next day, Royals P Yordano Ventura was ejected for throwing at him following a homer by teammate Josh Reddick, while in the third game, it was Kelvin Herrera who got the heave for sending a 100-mph fastball behind his head, while bench coach Don Wakamatsu and Escobar both also got tossed in the ensuing arguments. His teammates defended Lawrie, saying the slide that had started hostilities was good, intense baseball, and the rest was just the Royals losing their cool. He payed a career-high 149 games for the A's that season, with 109 at third base and 42 at second. He hit .260 with 16 homers and 60 RBIs, but his OPS+ was still a disappointing 92. It was a tough season for the A's, who finished in last place in the AL West, and they made some more changes afterwards. On December 9th, they traded Lawrie to the Chicago White Sox in return for two pitching prospects, J.B. Wendelken and Zack Erwin.

On June 25, 2016, Brett became the first White Sox player since Ron Santo in 1974 to hit both an inside-the-park homer and a regular homer in the same game. Following his 2nd-inning inside-the-parker off R.A. Dickey of the Blue Jays, teammates Dioner Navarro and J.B. Shuck followed with long balls. It was a night during which the Sox lit up the scoreboard with seven solo homers, tying a team record for long balls, but they still managed to lose the game, 10-8, becoming only the third team to do so after hitting that many dingers. He played 94 games that season and hit .248 with 12 homers and 36 RBIs. Not eye-popping numbers, but still good for an OPS+ of 99. So it was a surprise when the White Sox placed him on waivers for the purpose of handing him his unconditional release only a couple of weeks after the beginning of spring training on March 3, 2017.

Lawrie was out of baseball in both 2017 and 2018, but on February 9, 2019, he announced that he had signed a deal with the Brewers, his original team, to attempt a comeback.