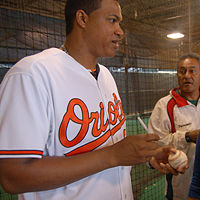 Alfredo Simon was signed by scouts Wil Tejada and Sal Agostinelli for the Philadelphia Phillies in July 1999. He made his pro debut the next summer for the DSL Phillies.

Simon was formerly known as Carlos Cabrera until his true identity and age (21 months older than originally believed) were discovered in June 2003.

Simon made his major league debut with the Baltimore Orioles in 2008 only a couple of weeks after losing the last game of the Mexican League finals.

In the first days of 2011, it was reported that Simon was the main suspect in a fatal shooting that took place in the resort town of Luperón, Puerto Plata on December 31, 2010, leaving a 25-year-old man dead and his 17-year-old brother injured. Simon stated through Felipe Alou Jr., the Orioles' representative in the Dominican Republic, that he had nothing to do with the shooting, but he went into hiding in his hometown of Santiago. On January 3rd, accompanied by teammate Julio Lugo, he surrendered to police in the provincial capital of Puerto Plata, explaining that he had fired celebratory shots into the air to mark the new year, and that the victim's death was accidental. His lawyer later added that Simon was only one of a number of people who fired shots that evening, and that the death occured 45 minutes after he had left the scene, from a bullet to the chest, not from an impact wound from a bullet fired into the air. He described the victim as a cousin and close friend of Simon. The pitcher was detained until ballistic tests could be performed, facing up to two years in jail for involuntary manslaughter.

On February 1st, a judge denied him bail, potentially forcing him to remain in jail for a year while investigations continued. On February 18, the Orioles placed his name on the restricted list, clearing space on their roster for Vladimir Guerrero. However, there was some good news for the first time since the incident, as persons close to the investigation indicated Simon would likely be released within 10 days, as authorities were now focusing their attention on another suspect. He was indeed released on March 3rd, and was able to obtain a visa to enter the United States as no accusations had yet been laid. The Orioles worked out a deal with Major League Baseball to allow Simon to work out in the minors while still on the restricted list, and he made his first rehabilitation start with the Bowie BaySox of the Eastern League on May 5, giving up 4 runs in 5 innings. Simon made it back to the major leagues on May 24th, earning a win in his return with a perfect inning in relief against the Kansas City Royals. On June 15th, though, the Orioles placed him on the disabled list with a strained right hamstring in what was described as a precautionary move in response to discomfort. When he came back, the Orioles converted him to a starter, in an attempt to bolster a flagging rotation. He did well and earned his first win in his new role in his second start on July 16, when he gave up only two runs in 7 innings against the Cleveland Indians in a 6-5 Orioles win. He finished the season with a 4-9 record and a 4.90 ERA in 23 games, including 16 starts. On November 8th, he was cleared of all charges related to the shooting incident after witnesses twice failed to appear at his hearing.

Simon was placed on waivers by the Orioles at the start of the 2012 season and was picked up by the Cincinnati Reds. he pitched 36 times in relief for the Reds that season, going 3-2, 2.66 with 1 save. He also pitched a scoreless inning against the San Francisco Giants in the NLDS, his first career postseason appearance. In 2013, he went 6-4, 2.87 in 63 games, pitching 87 2/3 innings as a valuable member of the bullpen. He was called upon in the Wild Card Game against the Pittsburgh Pirates, and pitched 1 1/3 innings without allowing a run. In 2014 however, the Reds decided to move him to the starting rotation; in his first start since 2011 on April 6th, he pitched 7 solid innings in defeating the New York Mets, 2-1. Not only did he keep on pitching well in the role, but on June 18th, he became the first 10-game winner in the National League when he defeated the Pittsburgh Pirates, 11-4. At that point, his record stood at 10-3, 3.05 in 14 starts to make him one of the surprise star performers of the first third of the season. At the All-Star break, his record stood at 12-3, 2.70. While he was not among the original selections to the 2014 All-Star Game, he was added to the NL's roster when teammate Johnny Cueto became ineligible because of the "Sunday Starter rule". He finished the season with a record of 15-10 3.44, setting personal bests for wins, innings pitched (196 1/3) and strikeouts (127).

If the incident on New Year's Eve in 2010 had been traumatic, Simon found himself in more legal trouble in April 2014, when a woman filed a civil suit in a court in Washington, DC, alleging that she had been raped by the pitcher a year earlier and seeking $15 million in damages. However, Simon's lawyer stated the claim was totally baseless and was an attempt to extort money from his client. The woman in question claimed the incident had occurred on the night of April 27th, after she had met the pitcher in a night club in the nation's capital, where the Reds where playing the Nationals, and he had taken her to her hotel room; she had filed a police complaint at the time and the case went to a grand jury, but the assistant U.S. attorney in charge had decided not to pursue the case further. Simon settled the civil case in October of 2015 with a payment of $150,000 to the plaintiff. He explained through his attorney that he was still denying all charges, but wanted to put the matter definitely behind him by paying for the plaintiff's legal fees and providing an amount of money to charity.

On December 11, 2014, the Reds traded Simon to the Detroit Tigers for infielder Eugenio Suarez and pitcher Jonathon Crawford. He got off to a terrific start for Detroit in 2015, winning his first four starts with an ERA of 1.65. On August 20th, he pitched the first shutout and complete game of his career in defeating the Texas Rangers, 4-0. The only hit was a 5th-inning double by Rougned Odor and he walked 2 and struck out 5 in the game. He went 13-12, 5.05 in 31 starts during the season, pitching 187 innings. In spite of the high ERA, his win total was easily the highest on the Tigers staff, three more than Anibal Sanchez, the only other Bengals pitcher to reach double figures. On March 17, 2016 he returned to the now pitching-starved Reds, signing a one-year contract as a free agent.

Simon can be called the anti-Aroldis Chapman. Just like Chapman dominates the charts for the fastest pitches thrown, Simon's name is all over the leaderboard for the slowest, courtesy of an occasional "balloon" change-up he uses to keep hitters off balance. Thus, in 2015, he registered the slowest pitch to be clocked during the season, at 46.7 mph. This was not an isolated case, as he had seven pitches come in below 57 mph. The list of slowest pitches was dominated by mystery pitchers fooling around in blow-out games, and pitchers who slipped during their delivery, resulting in a dying quail making its way towards home plate, but Simon stood out as his tosses were deliberate.