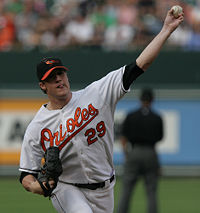 Pitcher Adam Loewen was selected by the Baltimore Orioles in the first round of the 2002 amateur draft and was the highest Canadian player ever drafted. Scouted by John Gillette and Dave Jennings, he was signed the next May for a $3.2 million bonus and a $4.02 million big league contract and made his pro debut in 2003 with the Aberdeen IronBirds (hitting the first batter he faced) and reached the majors on May 23, 2006. He was 1-1 with a 1.23 ERA in the 2000 World Junior Championship, finishing 2nd to Alexander Rodriguez in ERA. He was a two-way star at Chipola Junior College, being drafted as a pitcher, but also hitting .353 while not on the mound. He went 6-6, 5.37 in 22 games (19 starts) as a rookie in 2006.

Lowen suffered a stress fracture in his left elbow in May 2007, but was expected to return healthy for the 2008 season. However, he gave up pitching in July of that year and became a full-time outfielder in 2009, after moving to the Toronto Blue Jays organization. Making the trip up the minor league ladder for the second time, he played 103 games for the Dunedin Blue Jays of the Florida State League in 2009, hitting .236 with 22 doubles and 4 homers. In 2010, he moved up to the New Hampshire Fisher Cats of the Eastern League, where he hit .246 in 129 games, with 31 doubles and 13 home runs, giving a hint that he may indeed develop into a good enough hitter to make it back to the Show. He showed more promise in the Arizona Fall League, hitting .333 in 54 at-bats with 5 homers and 19 RBI. He then played in the Dominican Winter League, where he hit .355 with a 1.034 OPS in a brief stay.

Adam moved up to AAA Las Vegas in 2011, and continued to improve, hitting .306/,377/.508 in 134 games, with 46 doubles and 17 homers. On September 7th, Loewen made his first appearance in the major leagues in over three years, and his first at a position other than pitcher, going 1 for 3 with a run as the Jays' right fielder in a game against the Boston Red Sox. Those were not his first major league at-bats, as he had gone 0 for 2 as pitcher with the Orioles back in 2006. On September 11th, he hit his first career major league homer, a solo shot off Tommy Hunter against his former team the Orioles.

In 2014, he returned to the mound after a five-year interruption, working as a starting pitcher in the Philadelphia Phillies organization, starting off with the Class A Clearwater Threshers. The prolonged rest from pitching seemed to have done him good, as in 2015 he returned to AAA as a relief pitcher and did quite well for the Lehigh Valley IronPigs. He was originally on Canada's 2015 Pan American Games roster but was a late removal; Canada went on to win the Gold without Loewen. He made it back to the major leagues as a pitcher for the Phillies on August 10th. He was far from dominant, however, as he gave up 4 runs in 2 1/3 innings in his first two appearances, and had an ERA of 7.00 after 6 games, finishing at 1-0, 6.98 in 20 games.

He played for Surrey, BC in the 1996 Little League World Series.