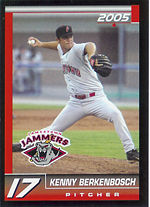 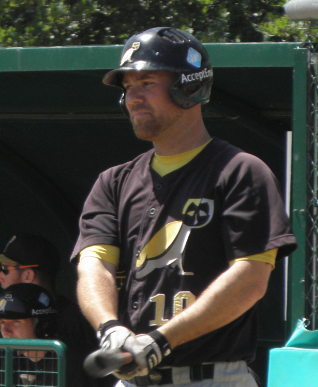 Kenny Berkenbosch was signed at age 17 by the Florida Marlins and played in their system for several years. He then returned to the Netherlands, where he won batting and doubles titles in the Hoofdklasse.

He was 1-0 in the 2007 European Championship, allowing no runs and four baserunners in 7 innings while striking out 8 to help the Dutch team qualify for the 2008 Olympics. In the 2007 World Port Tournament, Berkenbosch had a 10.13 ERA, allowing three hits, three walks, one hit batsman and one wild pitch in 2 2/3 IP.

Berkenbosch was the first pitcher to face the Thai national team in a Baseball World Cup. He held them to two hits in six innings in Thailand's first game of the 2007 Baseball World Cup. He threw 3 1/3 scoreless innings for the relief win over the Venezuelan national team later in the Cup. Overall, he allowed no runs and 3 hits in 10 1/3 innings in the event, leading the 4th-place Dutch team in ERA and wins.

Berkenbosch hit .309/.367/.509 in the 2008 Hoofdklasse and went 10-2 with a 2.24 ERA. He tied Leon Boyd for 2nd in wins, one behind Patrick Beljaards, was 9th in innings (76 1/3), 10th in strikeouts (49), tied for third in complete games (3), tied for the shutout lead (1) and was 9th in ERA, between Mihai Burlea and Diegomar Markwell. He won his only playoff game, then won his lone start in the 2008 Holland Series; he was 4 for 9 with a double, run and RBI in the Series as well as Amsterdam upset Corendon Kinheim. He started the winning rally in game one with a single off Michiel van Kampen and would come around to score, then beat Patrick Beljaards in game two.

Berkenbosch batted .299/.359/.422 with 34 runs in 40 games in the 2012 Hoofdklasse, finishing 7th in runs and tied for 4th with four home runs. In the 2012 European Cup, he batted .292 with 4 runs and 2 RBI. His six walks in the San Marino qualifier tied Mattia Reginato for the lead. Amsterdam finished third, their best finish since the 1991 European Cup (they had not placed higher than third to that point).

He was 3 for 11 with 3 doubles, a run, a RBI and five walks in the 2016 European Champions Cup and had a couple big plays. In a pitching duel with the Buchbinder Legionäre Regensburg, he scored the only run of the game. Facing Jan Tomek in the bottom of the 7th, he hit into a Matt Vance error and later came around on a wild pitch. His RBI also came at a timely point. In the finale against host ASD Rimini, he doubled off Carlos Teran in the top of the 10th to score Linoy Croes to put Amsterdam up 5-3; they survived to win 5-4. Berkenbosch won MVP of the Cup; while other players had better raw stats, he had come up big in two key moments. It was the first European Cup the Amsterdam Pirates had ever won. They were the 5th Dutch team to win, as Haarlem Nicols, Neptunus and Kinheim had all won multiple titles and ADO had won once.

His brother Joey Berkenbosch played in the Hoofdklasse in 2004, 2005 and 2010 and later was in the World Championship Mixed Martial Arts for Amateurs in 2015.