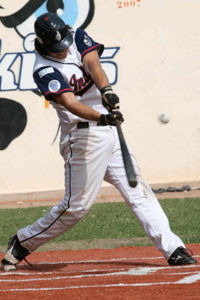 He studied Biological Anthropology at school; he chose Harvard as he wanted to leave the San Diego, CA area where he had grown up and was always impressed by the Harvard team. He also expressed an interest in Yoga while at school, and enjoys the television series "Friends" on DVD. He also played baseball in high school, for the Torrey Pines High School Falcons. He was a three-year letter-winner and starter, and was the team captain his senior year. He led his team in home runs two years in a row, and was named to the second-team All-City by the San Diego Union Tribune. He also played for for the Umba-Sutter Gold Sox of the California Coastal Baseball League in 2005, hitting .307 and stealing 21 bases in 24 attempts.

In the 2009 European Cup's Nettuno phase, Matt hit .250/.349/.400 with 5 runs and 3 steals in 5 games. He tied for 5th in the event in runs and led in steals. He also played for the Gauting Indians team at the 2009 Open international de Rouen, winning the MVP award of the finale for his efforts. He helped Gauting win the tournament, beating the American delegation, 13-2.

He was eligible for the German national team for the 2013 World Baseball Classic Qualifiers as a foreign player residing and playing in Germany. He did okay, going 3 for 10 with a walk, steal, four runs and two RBI in four games as Germany's shortstop. He tied for third on the team in runs, one behind Eric Suttle and Aaron Altherr. In the qualifier finale, with a spot in the 2013 World Baseball Classic at stake, he hit second and played short for Germany but went 0 for 3 in a 11-1 loss to Team Canada, retired by Andrew Albers each trip up.

In the 2013 season, he hit .326/.472/.526 with 24 walks and 33 runs in 26 contests while fielding .926. The Harvard alumnus was 4th in runs (between former minor leaguers Jamie McOwen and Jay Pecci), tied for third in walks, tied for fifth in steals (10) and was 5th in OBP (between Chris Beck and Maik Ehmcke). He starred in the postseason and was named finals MVP as Regensburg pulled off a four-peat. In the 2013 European Cup, he put up similar numbers to the 2012 Cup: 4 for 17, 4 R, 3 RBI, 5 BB, 4 SB, 4 E. He had a crucial squeeze bunt off Darwin Cubillan to end a 7-6, 10-inning upset of T&A San Marino. He tied Willie Vasquez, Lorenzo Avagnina and Seth La Fera for second in walks (2 behind Claudio Liverziani), tied for second in steals (one behind Matěj Hejma) and tied for second in errors (two behind Marc Obussier).

Having played for Germany in the 2013 WBC Qualifiers, he moved to the Philippines national team for the 2017 World Baseball Classic Qualifiers in February 2016 (he is of Filipino descent) to play alongside his brother, former AAA hurler Kevin Vance. He struck out all three times up and made two errors against host Australia but rebounded to go 2-for-4 the next day versus New Zealand (his hits coming off Andrew Marck and Jimmy Boyce). The Filipinos lost both games, with the other infielders adding three more errors, two by 2B Adriane Ros Bernardo and one by 3B Brady Conlan.

Regensburg hosted the 2017 European Champions Cup (brother Kevin had joined him on the team by now) but the club finished last; in the finale, Matt lined out against Lennard Stöcklin to end the game with a men on 2nd, down 4-3 against German rival Mainz. He hit .143/.368/.143 in the event and handled 11 chances error-free. He led the event in times plunked (two). In the '17 Bundesliga-1 regular season, he fielded .915 and was mainly now a center fielder; he batted .302/.441/.465. His 9 times hit by pitch led the loop.

He is the son of Tom and Eve Vance. His brother Kevin Vance has been a teammate, as noted above.